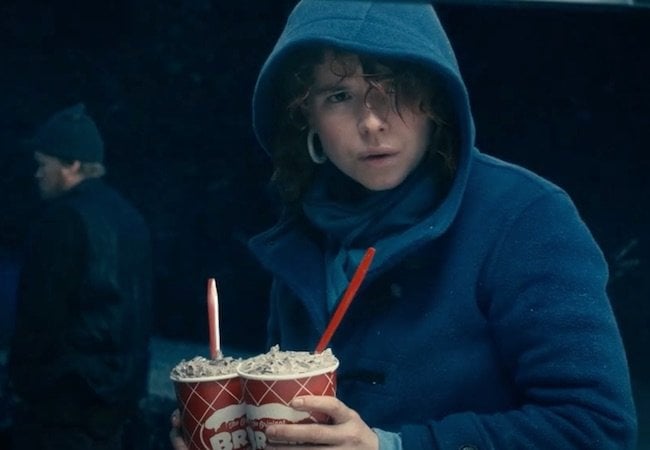 Movie News Rundown: A first look at the new Charlie Kaufman film I’m Thinking of Ending Things; summer book recommendations from the director of Moonlight, the author of American Psycho, and more; that Kindergarten Cop story is more complicated than it seems; and Sept. 4 is going to be a great day.

Book Recommendations: Does anyone else do that thing where you click around on your phone looking for something to read online, and everything is depressing, click-baity, or just bad? The cure for this is books. We’ve assembled this list of summer book recommendations from everyone from Barry Jenkins to Kelly Reichardt to Ashley Clark to Bret Easton Ellis to Sandy Tan to Alex Ross Perry to Ted Fendt to Marie-Louise Khondji to Adam McKay to Andrew Bujalski.

I’m Thinking of Ending Things: Here’s the brand-new trailer for the upcoming Charlie Kaufman film, starring Jessie Buckley and Jesse Plemons (above), and oof it looks good. The murderer’s-row cast also includes Toni Collette and David Thewlis, and three of the four being vets of FX’s Fargo doesn’t hurt the wintry vibe.

Sept. 4: I’m Thinking of Endings Things comes out Sept. 4, the day after Tenet and the same day as Mulan — is Sept. 4 the biggest movie day of the year?

More Charlie Kaufman: Making sure you saw this piece we did about the incredible BAFTA speech where he said he doesn’t consider himself a writer.

John Carpenter Masterclass: The Fantasia Festival just announced a new wave of programming for its upcoming virtual edition, running from Aug. 20 through Sept. 2, and it includes a masterclass with John Carpenter that will cover Halloween, The Thing, Escape From New York… come on. He’ll also get a much-deserved Lifetime Achievement Award. More details are here.

Kindergarten Cop Update: I talked yesterday with author Lois Leveen, who has been inundated with hateful messages since she urged Portland’s NW Film Center to cancel a screening of Kindergarten Cop over “copaganda” concerns. This story gets into her reasoning, Portland’s racial legacy, and how this story ends happily with lots of Portlanders watching a doc about John Lewis.

Excellent Doc: In the early ’90s, Army Col. Margarethe Cammermeyer was discharged from the Army — despite an exemplary service record — for being a lesbian. The new doc Surviving the Silence adds a new twist to the story: Col. Patsy Thompson, who presided over the hearing, was also a lesbian, and worked behind the scenes to help her however she could, without revealing her own secret. Director Cindy L. Abel wrote a wonderful piece for us about how she’s built an audience for Surviving the Silence despite the considerable challenges of the pandemic. Remember a few weeks ago when we asked for “raise all boats” ideas that could help all filmmakers? Abel has responded in a big way.

From Candyman to Captain Marvel 2: Nia DaCosta, director of the upcoming Candyman reimagining, has scored the coveted job of directing the Brie Larson sequel, Deadline exclusively reports. Here’s the trailer for Candyman, surely the best of the year.

R.I.P. Pete Hamill: The crusading New York editor and columnist, who occasionally wrote screenplays and played himself in King of New York, has died at 85. The New York Times has this obituary. If you can stand another book recommendation, his 1994 alcoholism memoir, A Drinking Life, is beautiful.

Fun Thing: I love everything about this Bay Area news report of the Lark Drive-In Theater in ridiculously beautifully Marin County, California, especially the family hold the news station’s mic for the sake of social distancing. It is still possible to have fun, especially when a drive-in is involved.

If You Like This Newsletter: You can help us a lot by encouraging one friend to sign up. It takes 10 seconds.

Kindergarten Cop Screening Canceled in Portland After Objections About Over-Policing in Schools
The Best Postscripts in Cinema: From Do the Right Thing to Barry Lyndon, 5 Films That Do the Epilogue Right