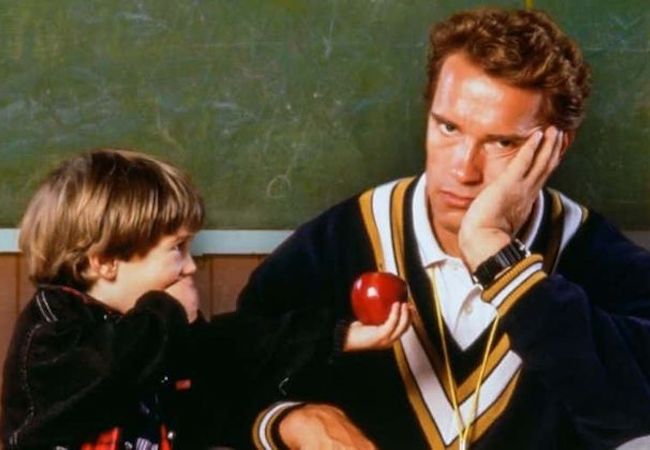 Portland’s NW Film Center has canceled a planned screening of the Arnold Schwarzenegger action comedy Kindergarten Cop after complaints that the film makes light of over-policing in schools.

The film center had planned to show the 1990 film — which was shot in Astoria, Ore. — to mark its 30th anniversary, as part of a drive-in, socially distanced screening series.

In the film, Schwarzenegger plays a police detective who goes undercover as a kindergarten teacher in order to protect a drug dealer’s wife and child, who attends the school, from the drug dealer. In the process, he discovers a love of teaching and quits being a cop. The movie is best known for the Schwarzenegger line, “It’s not a tum-ah,” as he argues with children.

The newspaper Willamette Week noted that the decision to cancel the screeening — which was replaced by a second screening of the new documentary John Lewis: Good Trouble — came after Portland author Lois Leveen tweeted that a “national reckoning on over-policing is a weird time to revive Kindergarten Cop.”

“There’s nothing entertaining about the presence of police in schools, which feeds the ‘school-to-prison’ pipeline in which African American, Latinx and other kids of color are criminalized rather than educated. Five- and 6-year-olds are handcuffed and hauled off to jail routinely in this country. And this criminalizing of children increases dramatically when cops are assigned to work in schools,” she tweeted.

In an interview with MovieMaker on Tuesday, Leveen said she alone doesn’t have the power or influence to make the film center cancel a screening. She also noted that Portland recently decided to remove police from its schools, with Mayor Ted Wheeler tweeting, “We must disrupt the patterns of racism and injustice.”

“There is a real hunger from our PDX audiences at this moment to see the film and we’re glad to hear that we’re able to showcase this timely work that showcases the movement towards racial justice which Rep. Lewis devoted his life to. As someone who grew up with John Lewis as my representative in Atlanta, it’s personally meaningful to honor the legacy of this incredible man and share the story of this real-life hero with our audiences,” she said.

In an email to community members, NW Film Center said that all of the films initially selected for the drive-in series’ opening weekend, which included John Lewis, Kindergarten Cop and Moonlight — honestly portrayed “bullying, toxic masculinity, softening and hardening/bodybuilding, complex male role models, the influence of equally complex women and family members, as well as systemic issues within our schools and culture that are problematic and often nightmarish experiences for many children, particularly young black men and LGBTQI+ individuals now and in our past.”

Leveen, who has written for The New York Times and The Atlantic, and who wrote the novel The Secrets of Mary Bowser, about a slave-turned-Union spy, said she is a longtime attendee of NW Film Center screenings and usually appreciates its work, but was surprised and disappointed by the decision to screen Kindergarten Cop.

Instead of the discussion she hoped for about the appropriateness of the film, she said, she has been inundated with hateful tweets and emails that are misogynistic, anti-Semitic, and accuse her of being a traitor to the white race, among other bile. Some have threatened her with violence.

Still, she said, “My kid didn’t get shot in the park by a cop today. … Getting an email does not compare to what people have endured in the history of America.”

She suggested that if the film center wanted to screen the film, it could have also included a “talk back” session about the messages it sends. But she wishes the film center had had that conversation internally.

She said the screening reflects an apparent lack of understanding that for Black families, police can feel like a threat — the opposite of Schwarzenegger’s innocuous character is in the film.

“I think this is a film that so normalizes white experience that it doesn’t take into account other people’s experience,” she said. “You’re making a lot of assumptions about what’s true in your family being true in everyone’s family.”

The joke of Kindergarten Cop is that Schwarzenegger’s tough guy doesn’t remotely belong in a classroom. The humor is in the juxtaposition of his hard edge and the soft classroom setting. Is it possible that she and the film agree that cops don’t belong in classrooms?

“The film’s premise is that schools will change cops, but in reality, schools don’t change cops, cops change schools,” she said. She noted that the 1990s, the decade that followed the film’s release, were marked by an increase in school police, arrests of young suspects, and for-profit prisons.
She also recommended the documentary Pushout: The Criminalization of Black Girls in Schools.

“It’s true Kindergarten Cop is only a movie. So are Birth of a Nation and Gone With the Wind, but we recognize films like those are not ‘good family fun,'” she said in a follow-up email to Willamette Week, adding that they “are relics of how pop culture feeds racist assumptions.”

A spokesperson for NW Film Center told Willamette Week it weighed Leveen’s comments as well as “a dozen others, including Black community members who asked us to consider opening the Drive-In with a different movie.”

The cancellation comes as the Black Lives Matter movement has led many in liberal Hollywood to question whether film and TV portrayals may have made real-life police feel empowered to kill Black suspects. Critics have called out what they call “copaganda” films that celebrate tough-guy cops while glamorizing rule-breaking and abuse, as well as films like Gone With the Wind that traffic in racist stereotypes.

Portland has drawn national attention because of a militarized crackdown by unidentified federal agents on protestors in the city. The federal government has agreed to cede law enforcement to local officials. Some protesters have been accused of exploiting the Black Lives Matter protests, which call for an end to police killings of Black people, to promote more generalized anti-government protests.

But as The Atlantic details, despite its liberal population, the region has been historically unwelcoming to Black people. Among the examples: “In 1844, the provisional government of the territory passed a law banning slavery, and at the same time required any African American in Oregon leave the territory,” The Atlantic wrote. About a decade later, it banned Black people from coming to the state. Oregon was also one of the last states to ratify the 15 Amendment, which gave Black people the right to vote.

“This history resulted in a very white state,” The Atlantic wrote.