Movie News: Scarface, Capone, and Pepe the Frog Will Be Your Villains Today 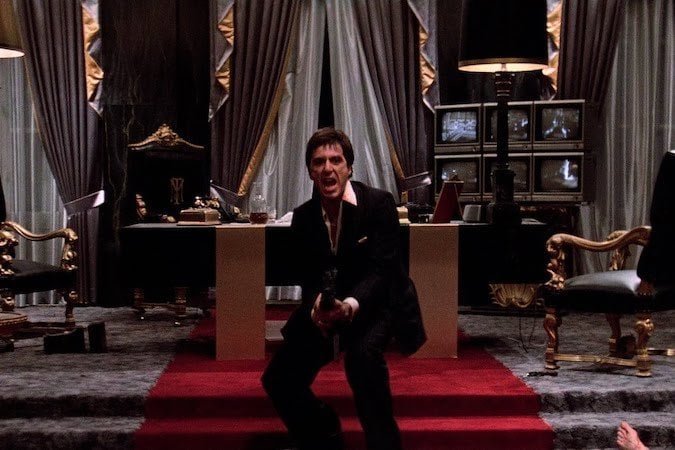 Happy Friday, friends. In today’s Movie News Roundup, we look at some of society’s greatest menaces — Scarface, Al Capone, and Pepe the Frog — and have a lovely chat with good guy Kyle MacLachlan.

How Half-Empty Theaters Can Be Profitable: The Hollywood Reporter explains how Tenet and Mulan could succeed even if theaters are only half-full because of COVID-19. Spoiler alert: Theaters were often half-full even before COVID-19.

Green Zone, Red Zone: THR also has great look at the varying regulations around shooting films in Europe. Paris, for example, has designated green zones where filming is allowed, and red zones where it is not. Your French accent will elicit exaggerated eye rolls in both zones.

Say Hello to My Little Friend… Again: Luca Guadagnino will direct a new version of Scarface with a script by the Coen Brothers, and we’re guessing it will be pretty darn good. Everyone from Antoine Fuqua to Pablo Larrain has been attached to a Scarface remake in recent years. The original 1932 Scarface, directed by Howard Hawks, featured Paul Muni as a gangster inspired by Al Capone. Brian De Palma’s 1983 version, which you may have seen on a lot of T-shirts, featured Al Pacino as 1980s cocaine magnate Tony Montana. Stone’s film ends with Tony introducing his dearest friend, a grenade launcher/machine gun, but he tragically never has time to tell us his little friend’s name. We’re certain the director of Call Me By Your Name will finally solve the mystery.

Speaking of Al Capone: We talked to the great Kyle MacLachlan about playing Al Capone’s morally compromised doctor in the new film Capone. “Doesn’t everyone grow up wanting to be Al Capone’s doctor?” he asks. We also talk about acting with a dramatically transformed Tom Hardy, his recent run of period films, including the upcoming Tesla with Ethan Hawke, and what kind of normal conversations he has with David Lynch. You can listen by pressing this arrow:

How to Build a Story: Loree Seitz writes about how Caitlin Moran drew on her own life as a ruthless teenage music critic for the new Beanie Feldstein film How to Build a Girl.

Scorsese’s Rom-Com Cameo: For his directorial debut, Almost Love, Mike Doyle set out to make an LGBTQ film that is neither a coming-out nor coming-of-age story. At one point during the production, he felt stressed out — and got a nice pep talk from a fellow dinner party guest who also happened to be a movie director. He talked about it with Sam Lively.

Pepe Hijacked: The captivating new documentary Feels Good Man explains how a silly cartoon character became the unwitting mascot of racists, incels and trolls, while helping Donald Trump win the White House. We talk about it on the new Low Key podcast, featuring me and my co-hosts Aaron Lanton and Keith Dennie. You can listen by, yes, pressing this arrow:

And now, a remake of a remake we call yesterday’s movie news.