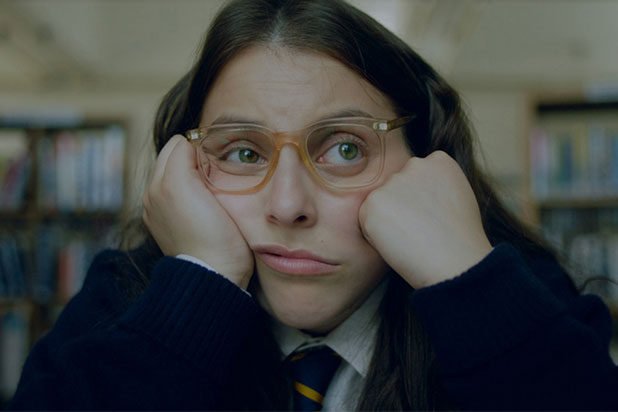 The following includes spoilers about the Coky Giedroyc film How to Build a Girl, based on the novel by Caitlin Moran.

Based on journalist and author Caitlin Moran’s novel of the same name, How to Build a Girl follows Johanna Morrigan, played by rising star Beanie Feldstein, as she transforms herself from a nerdy high schooler to a wildly popular music critic named Dolly Wilde. The witty coming-of-age film draws on Moran’s own experience as a young journalist in London — with some interesting overlap with her real life.

How to Build a Girl mirrors Moran’s unique upbringing as the eldest of eight children raised in Wolverhamptom, England. Like Johanna, Moran submitted to a music critic competition at a young age. While Johanna earns a chance to write for D&ME magazine in the film, Moran kickstarted her journalism career by being named The Observer’s Young Reporter of the Year at age 15 and scoring a role as a music journalist for Melody Maker.

Like Moran, Johanna becomes known for ruthlessly skewering bands in her reviews. In the film, Johanna is named the “Arsehole of the Year” at an annual awards show.

Following the stark realization that her brutalizing music reviews don’t reflect the person she strives to be, Johanna lets go of her ruthless persona and aims to reinvent herself once again. In an interview with Sky News, Moran said she, too, let go of cynicism to embrace joy and positivity. “You can’t grow when you’re in armor,” Moran mused. “You can’t dance when you’re in armor.”

Although the film ends with Johanna receiving an offer to write for a magazine better suited to her talents, Moran’s own accomplishments give the film an even greater, more satisfying resolution. As a journalist, author and broadcaster for The Times, Moran has won the British Press Awards Columnist of the Year for 2010 and the London Press Club Columnist of the Year in 2012, among many other awards.

Moran’s books include not only the novel How to Build a Girl (2014) but also the nonfiction How to Be a Woman (2011) and Moranifesto (2016). Using her own personal experiences, Moran takes a humorous and witty approach to discuss feminist issues. In an article written for Penguin, titled “How Books Made Me a Feminist,” Moran explains the importance of young girls reading novels written by women, noting how uncomfortable she felt when 20th century male authors would coldly evaluate women in their novels.

Moran’s draws from her feminist work in How to Build a Girl by giving viewers a refreshing outlook on the typical coming-of-age story. As an ambitious, outspoken young woman, Johanna’s reinventions of herself never diminish nor sacrifice her boldness and humor. By continuing to be unapologetically herself, Moran builds Johanna into a vibrant and inspirational young woman.

How to Build a Girl is now available on Video on Demand and Amazon Prime Video.

How Mike Doyle Brought New Perspective to the Romantic Comedy
Movie News: Scarface, Capone, and Pepe the Frog Will Be Your Villains Today