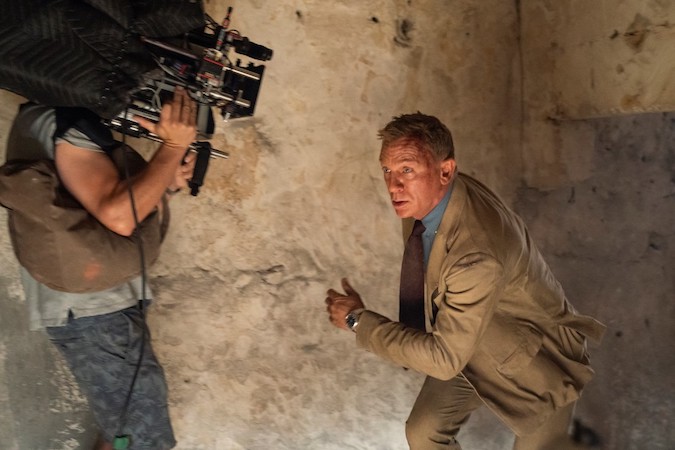 No Time to Die cinematographer Linus Sandgren writes for us about trying to capture James Bond’s soul; bringing Mass to life; how should we judge Dave Chappelle and his new Netflix special The Closer, if at all? All in today’s Movie News Rundown.

Out Today: No Time to Die was the first major film delayed by the pandemic, and its arrival in theaters today feels like a sign of progress. Hopefully fans of movie theaters can take a little delight in this film finally being available for us to watch, safely, in an auditorium full of fellow film lovers. Also it’s a James Bond movie so I understand there are some good chases and explosions and people kissin’ and wrasslin’.

Early Signs Are Good: No Time to Die earned $6.3 million in Thursday night previews, the most ever for a Bond movie. Variety has details.

Shooting Bond: Here’s No Time to Die cinematographer Linus Sandgren explaining for MovieMaker how he and director Cary Joji Fukunaga honored the soul of Bond with No Time to Die.

Mass: Fran Kanz wrote this fascinating piece for us about how he wrote Mass, in which the parents of a child killed in a school shooting confront the parents of his killer. Kanz, an actor-turned-screenwriter and director, acted out all of the parts on his own, imagining the arguments and emotions from all perspectives. Mass is in theaters now.

Hot Springs!: The Hot Springs Documentary Film Festival, one of our 50 Film Festivals Worth the Entry Fee, kicks off its 30th edition today. Tonight’s opening night gala includes a screening of Sam Pollard and Rex Miller’s documentary Citizen Ashe — about groundbreaking tennis star Arthur Ashe — with opening remarks by the brilliant Tig Notaro. You can learn more about this year’s Hot Springs lineup here. It runs through Oct. 16.

That’s Great, But Also: How Do I See Citizen Ashe? Details on the in-person screening are here, and you can watch the film online for $10 here, starting tomorrow.

Evolution! Mallorca: Another of our 50 Film Festivals Worth the Entry Fee, the Evolution! Mallorca International Film Festival, has just announced the lineup for its 10th annual gathering on the paradisiacal Spanish island, which begins Oct. 27. Wim Wenders will receive the Evolution Honorary Award, and Suzanne Lindon, whose Spring Blossom will make its Mallorca premiere, will receive the 2021 Evolutionary Award-New Talent. The other films in competition include the British film The Laureate, making its world premiere. William Nunez’s 1920s-set drama stars Tom Hughes, Dianna Agron and Laura Haddock, and is focused on the acclaimed author and war poet Robert Graves, and his unconventional home life. It will play at the closing night gala on November, which will include Nunez, his principal cast, and Hughes’ family. Graves’ work includes the novel I, Claudius, the basis for the acclaimed BBC serial. You can see the full lineup and learn how to attend at the festival site. We’ll have much more on Evolution! Mallorca soon.

May I Editorialize About Dave Chappelle’s The Closer? As a professional reporter, I’m beyond tired of other reporters frantically transcribing comedy specials, desperate for the comedian to say something allegedly headline-worthy. A comedic persona is a comedic persona, and jokes are jokes, and I think reporters are being dishonest and disrespectful to readers when they flatten out a comedian’s act and present it on the page as if the comedian were a politician advocating for a policy.

Comedians, I can’t believe I have to say, are not meant to be taken seriously. Dave Chappelle’s persona is a guy who stumbles frequently into mistakes and misunderstandings despite good intentions — his human foibles, including personal prejudices and failings, get in the way of him achieving the high goals he aspires to. (Does that maybe sound relatable to anyone?)

He’s having a human experience, in other words, and to criticize his on-stage character for being often morally wrong is like criticizing Scorsese because characters in his movies commit crimes. I know some people are saying, “But Dave is being himself!” but this is a like when people used to claim rappers weren’t real artists because “they’re just talking.” Appearing authentic or artless is one of the hardest things to do, artistically. The best performance makes you forget it’s a performance.

Most successful comedians pretend to be a little dumber than they are, and we as an audience enjoy the irony or comedic tension between what the comedian purports to believe and what we as the audience know to be the truth. For example, when I saw Anthony Jeselnik onstage a few weeks ago, telling jokes about hurting children, we in the audience understood that he didn’t really want to hurt children. What was funny was that anyone would cockily say the horrible things he said, while appearing supremely confident that a room filled with strangers would agree with him. Adding another layer of comedic tension and irony: We did laugh! But we didn’t so much laugh at the jokes, as the fact that he would tell these jokes. (Especially in an environment where people will breathlessly post them online in the hopes of generating clicks.) We were laughing because he’s a very skillful joke writer, but also at his audacity.

When jokes are really working, of course, we don’t think about why they work. They just do. But when humorless third-parties intervene to strip jokes of their irony and nuance and present them as supposed declarations of the comedian’s actual belief, those of us who like a given comedian find ourselves rather tediously analyzing whether the target of the joke is the subject of it, or the person telling it. I tend to assume the target of most jokes is the comedian.

Do I extend this policy of good faith to all artists? No. But I extend it to real artists, who I think know exactly what they’re doing and are humanists at heart. I don’t extend it to someone who wanders into an open-mic and starts ranting about people he hates. Dave Chappelle is one of the best who has ever done standup, and knows exactly what he’s doing.

That said, I do think it’s fair to judge whether you find a comedy special funny. (Some might even argue that it’s the only way to judge a comedy special.) I watched Chappelle’s The Closer and while I consider myself a big fan, I only laughed once or twice. He just didn’t have that many good jokes this time, in my opinion. The stuff about the supposed dangers of cancellation ate up too much time, for my taste. I’m always bored by the narrative that someone holding a microphone, being paid millions of dollars to speak to a crowd for a Netflix special that will be seen by millions of people, is in any danger of being cancelled.

Have a Lovely Weekend Everybody: I bet comedian Bo Burnham would have an excellent counter to everything I wrote about Dave Chappelle, but who knows. This song he wrote is gorgeous.

Main image: Daniel Craig as Bond. James Bond in No Time to Die.