In this feature, No Time to Die cinematographer Linus Sandgren explains how he and director Cary Joji Fukunaga honor the soul of Bond with their latest and why it was often easier to build a giant set instead of finding the perfect location.

Early on, No Time to Die director Cary Joji Fukunaga and I talked over Skype about his idea for this new Bond movie and how it could honor the soul of the Bond franchise and who James Bond is.

Cary talked about how he loved the romantic action movies that the Bond franchise stands for — this whole history of rich, romantic and fantastic action films. So we talked about how to achieve that feeling, shooting on film on large formats like 65mm to give the audience everything they could possibly imagine. I was happy that he was into the charming action and that he wanted to also get humor in there, and he wanted real drama. He wanted people to cry and laugh and have a great ride.

We synchronized a lot on that very first call regarding how we looked at the heart of Bond. As writing was happening, we started pre-production, and there was a lot of focus on finding locations, with a group of 10 including production designer Mark Tildesley, my gaffer, David Sinfield, and Cary. I’ve done big films before — The Nutcracker and the Four Realms was a big-budget film shot in Pinewood Studios. But No Time to Die was going to be shooting in six countries all over the world, with obviously many more cameras, and many more sets. So I realized early on that I needed to find a workflow where we could streamline the chain of information regarding visuals. My gaffer and I did a lot of testing in pre-production to determine color palettes that we could apply in various locations. We programmed our light tables with color presets for LED lights and made detailed notes for a methodology in every type of location and time of day. There was a good shorthand between us, and also the second unit, to have a lot of those decisions already decided in pre-production. 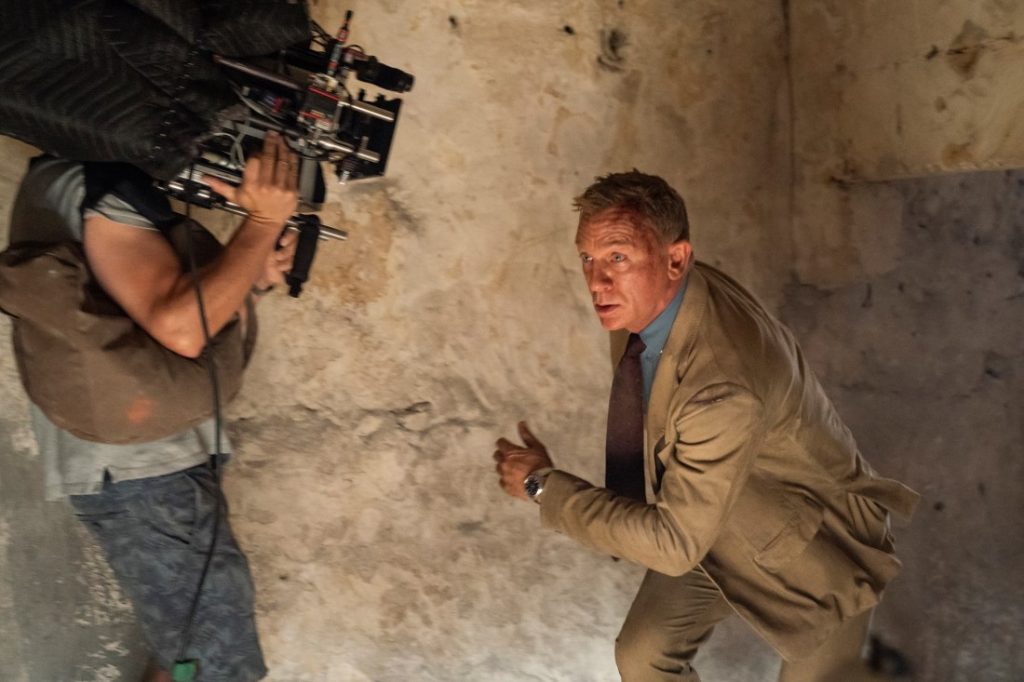 There was just so much more logistical work that we had to do to run this big ship, but it was intimate and small in a way, in that the core — the producers, the decision makers, real decision makers — were in the same room as the director. Even though this was a big production, we could almost make it like you would an independent film. 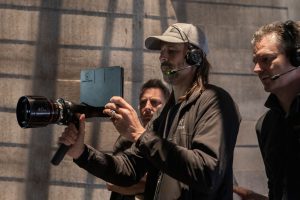 Linus Sandgren on the set of No Time to Die. Photo by Nicola Dove/MGM/United Artists

over to Matera, Italy, and we’d make that city feel really hot. We always tried to find a specific mood for each location. With that in mind, I started to do lots of mood boards on how I saw the different locations and presented them to Cary, who provided thoughts or his own inspiration that I could work off — Cary, Mark Tildesley and I would have that spitballing time for all the scenes in the film. This is a normal procedure, but we did that with a lot of different countries and scenes that we had to also go scout. We shot in Jamaica, Italy, England, Scotland, Norway, and the Faroe Islands — so there was quite a bit more than normal to discuss. We always looked for how to move from this scene to the next and still stay in the same world. No Time to Die has quite an emotion-driven storyline. There are moments that are not only funny or action-driven but actually emotional.

Cary loves old-school gadgets and things that make you laugh, and there are a lot of characters that are full of wit. He spent a lot of time making characters that you’d like to hang out with, whether they are good or evil. He has a lot of love for these characters.

Thanks to the formula for the light that we created, the programmed LEDs could be changed at the last minute. There is a sequence in a lab that initially had yellow and white tubes. On the day of shooting, Cary wondered what color options we had, and if we could play around and look at green tubes. Every single lamp was connected with a lighting desk, so we had full control, and it was quick to change it on that day.

Cary thinks big. On a set, he would use an entire stage. He wouldn’t be happy if it was cut in half. On the largest stage in Pinewood Studios, we built this huge underground concrete-looking bunker filled with water in the middle, with doors that open to the sky in the ceiling of the studio. Even though it was already around 250 feet long, Cary asked: “Why don’t we make it even longer?” So we hung a blue screen to allow a set extension in VFX. We wanted the location to be moody and somewhat futuristic, so working with Mark Tildesley and the art director, we ended up having around 30 custom-made light sticks that came out of the water. Some extras working in two feet of water would move these sticks around. That was the only light source in that entire environment — it was very simple. But then we had four 100,000W SoftSuns, in addition to the daylight coming in from the top, as the roof doors opened and light washed down. This was how the contrast in our lighting looked from scene to scene sometimes — and in this instance in the same scene. We went from very little lighting to suddenly a lot of light. Often the sun on these sets would be represented by these 100K or 200K light sources. 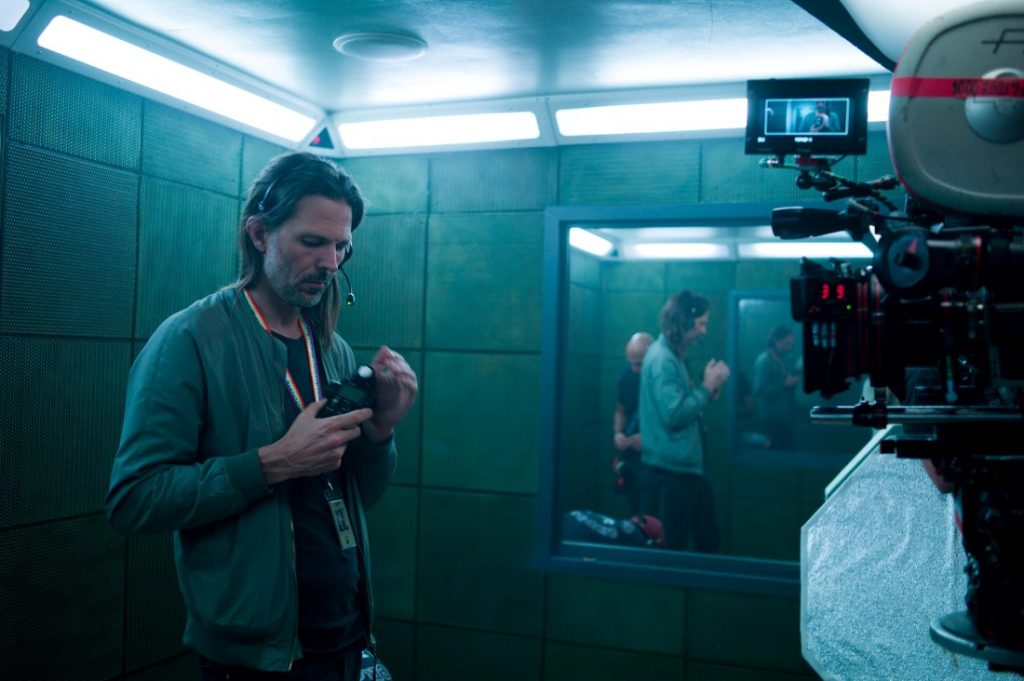 We used free dollies and cranes mostly. Cary and I both love dollies. When Bond was moving with confidence, we moved with dollies. When Bond was in handheld combat actions, we were handheld. We also used handheld for emotional scenes where he was a little bit unstable emotionally. Handheld also helps the audience feel the physical struggle for Bond, who is older but still strong.

At one point, we were scouting in Norway for a frozen house on ice, and we ended up finding a beautiful location that Cary loved.

Instead of also finding a house, we built the house in London and shipped it up to Norway and put it on the ice. Because we needed to do things to this house, and it had to look a certain way inside in order to work, it just had to be built.

Also read: Lamb Started Out as an Experiment in Filmmaking 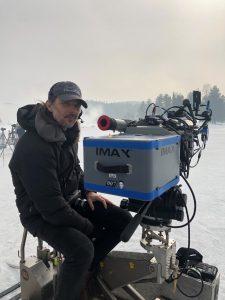 No Time to Die DP Linus Sandgren on a dolly in Norway. Photo by Jack Mealing

London on the outdoor backlot of Pinewood. This turned out to be a good decision, since we ended up shooting about eight weeks, all nights and very complicated stunts, in this environment. We shot it all in IMAX, with cable cams and stunts, and we designed the lighting so we could shoot longer takes in 360 degrees. Linus Sandgren

I never want to work against the director. Even if he wants something that I did not initially think of, I explore that idea, because I always want to push my own limits. I try to adapt my way of thinking onto the director’s thoughts. You want to be on the same page and make the same movie — that’s the key. I find so much joy in finding different types of directors with different work methods. When I’m working with David O. Russell, he appreciates the camera to always be able to move anywhere at any given moment. As you’re rolling, he wants the camera to be able to move over there or other there. That flexibility is a challenge to figure out and may not be my initial ideal situation, but in letting him do that, he makes the film the way he wants it: spontaneous with new dialogue coming up suddenly. So I need to give him that flexibility. Of course I could object and say, “I don’t think that’s the best way to do this, I think you should think about it this way.” I’m not afraid of speaking up if I feel like something should be different, but I’m very happy to explore other ways with directors. Someone like Gus Van Sant is very much into letting things happen and photographing it almost like a documentary in the moment. 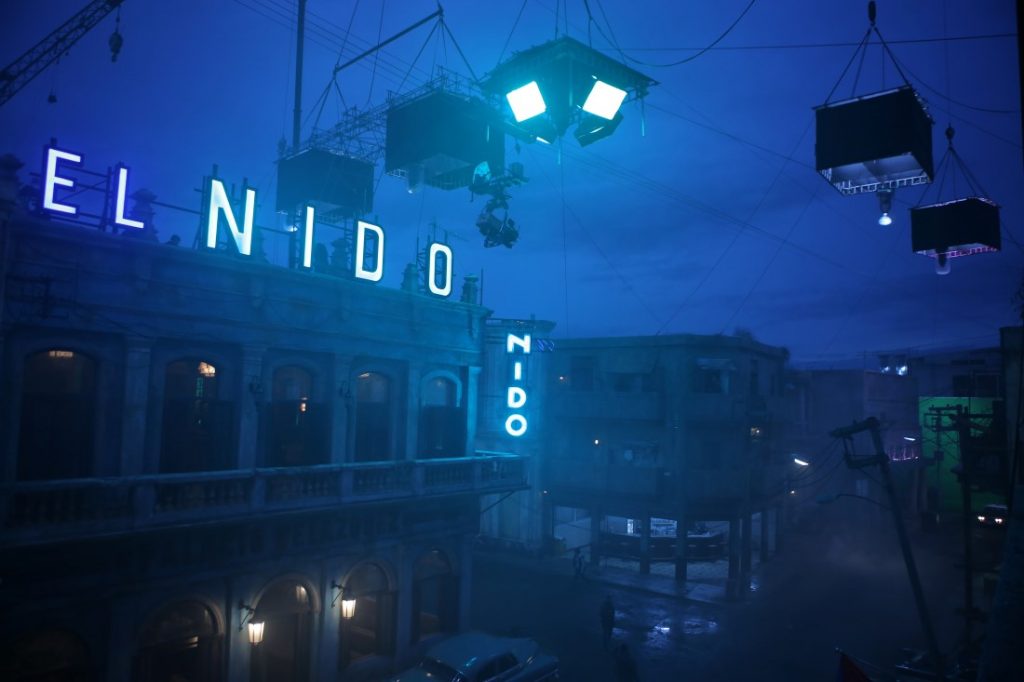 The No Time to Die Cuba set built on the backlot at Pinewood Studios in London. The set was lit with nine light boxes from seven mobile cranes and hundreds of practicals including neon lights. Photo by Jack Mealing

Between La La Land and First Man, Damien Chazelle was almost a completely different director in regards to what he wanted. He wanted a curious self-aware camera in La La Land — one that was playful, almost like its own character. In First Man, he wanted it to feel like a documentary. So it was both a completely different approach and also different method in how we approached it and shot the project. Cary is also that way. He changes a little like Damien for the project. He approaches the script and the story independently from what story he’s telling.

Usually I get intrigued by differences. It’s key that you collaborate in a way where you have mutual respect for each department, and that early on you establish the answer to the questions: “What is the film we are making?” If everyone is on the same page to make that film, the collaboration will be fruitful. But you need to be sensitive early on and ready to compromise. I’ve been lucky. Be a good collaborator and listen to each other.

No Time to Die, directed by Cary Joji Fukunaga and lensed by Linus Sandgren, is now in theaters.

Lamb Started Out as an Experiment in Filmmaking
Beyond Fest Responds to the Pandemic with 31 Free Screenings — A Mix of World, U.S. and West Coast Premieres