Lamb Started Out as an Experiment in Filmmaking 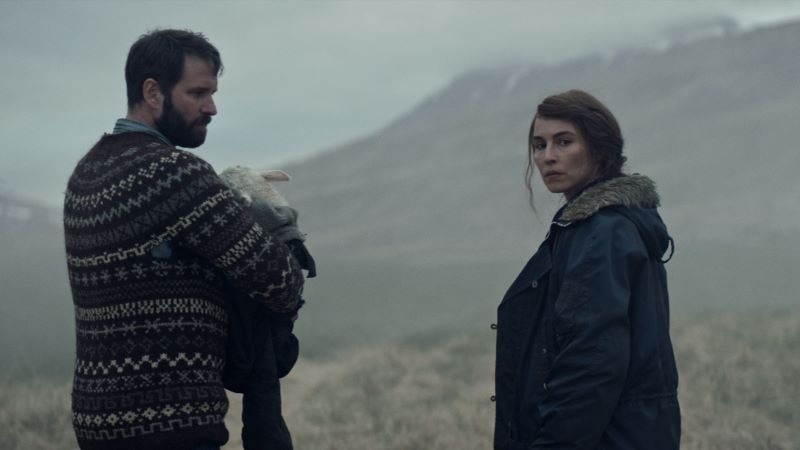 The seed for the horror film Lamb was planted when moviemaker Valdimir Jóhannsson and author-poet-screenwriter Sjón met up at a cafe in 2009 to discuss whether a proper film narrative could be built around a single image. They soon set out to build their spare folkloric story about a reserved farm couple (Noomi Rapace and Hilmir Snær Guðnason) raising sheep in a remote valley in Iceland. In the next decade of trying to get Lamb produced, the two co-writers maintained a steadfast faith in their original vision. It helped that they shared a love of slow, challenging cinema. “We said to the producer, once he came on, we have to agree on one thing: We will all be happy if we get 15 people to come to see this film in Reykjavík,” Sjón says. Sjón and Jóhannsson were taking trips to the cinema together for inspiration, and Jóhannsson notes, “usually the films that we loved, it was just me and Sjón and maybe three others.” In this feature, Jóhannsson and Sjón discuss their early meetings, what farmers actually do, and how wayward brother Pétur (Björn Hlynur Haraldsson) enters the farm couple’s fragile world. 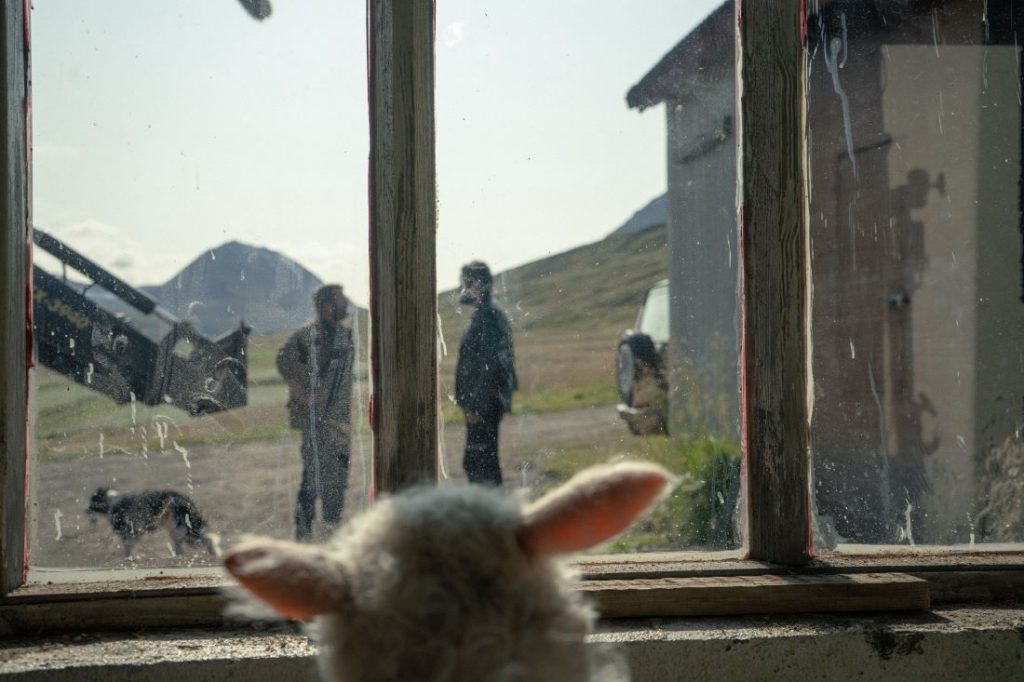 Valdimir Jóhannsson: I had made a sketchbook, where I was collecting references, with some drawings I did. I was trying to create some mood for a film that I wanted to do. But the story was not there. Sjón is my favorite writer. I knew that it would be great to work with him because his work deals a lot with mythical folktales. So we met for coffee, and I showed him this book.

Sjón: I was so enthusiastic about his book of drawings, references and collages. He had cut lamb heads out of photos and glued them to children’s bodies. I was so excited about it that we started just a week later. This was in the autumn of 2009. The film has been a long time on its way.

We started meeting weekly in the afternoon on Saturdays, and we did three-hour sessions. We just started looking for the story in the material that Valdimir had.

It was obviously a story that took place in the countryside. There were a couple of farmers, there was this mother figure — this woman was very prominent in the material he brought to the table. We started searching for a story that could make it possible that you would get this image of a woman holding a child with a lamb’s head.

That was the first task: Was it possible to come up with a story that was credible, that would somehow make this real, at least to the person holding the lamb?

We love cinema where the weird is represented as a given reality. Uncle Boonmee Who Can Recall His Past Lives was a great reference for us, and the way Apichatpong Weerasethakul works with the supernatural.

In the folk story, the existence of the supernatural is taken for granted. You don’t question it. The ghost comes and sits down by your table, and you can decide if you’re going to serve the ghost noodles, or whatever.

The big challenge was to bring forward a personal story for these people, that would draw the audience in and make them ready for the reality of the creature, when it happened. So you would be so occupied with the emotional story going on — even with these people who can’t share their emotions who almost don’t speak — that you would be in the right place for the creature to be completely believable in the story. You would accept that they take it on as a task in their lives. Narratively, that was the challenge.

A farm in a remote valley already strips away a lot of possibilities. We talked about this: Would they go to town? Would other people come to the farm? Do they have mobiles? When does it happen? And we slowly stripped it down to the bare minimum, and that’s what you have in the film now.

It was quite helpful that it’s a life with a very defined rhythm. If you’re a sheep farmer, you’re in this cycle with your animals.

We just looked for what real farmers do. What tasks are they faced with during their day? They have to feed the animals, they have to harvest, they have to get hay for the animals, and the sheep start giving birth in the spring. We looked at the normal life of a farmer, and that is the story.

The good thing about non-human characters is that as an audience, you automatically don’t expect dialogue. So, the story starts in the world of the animals, on Christmas Eve, in the sheep shed. This prepares you for the silence of the humans. Because you start reading into the animals’ behavior and their faces and their looks. Then you’re prepared to start reading into the faces of the actors. 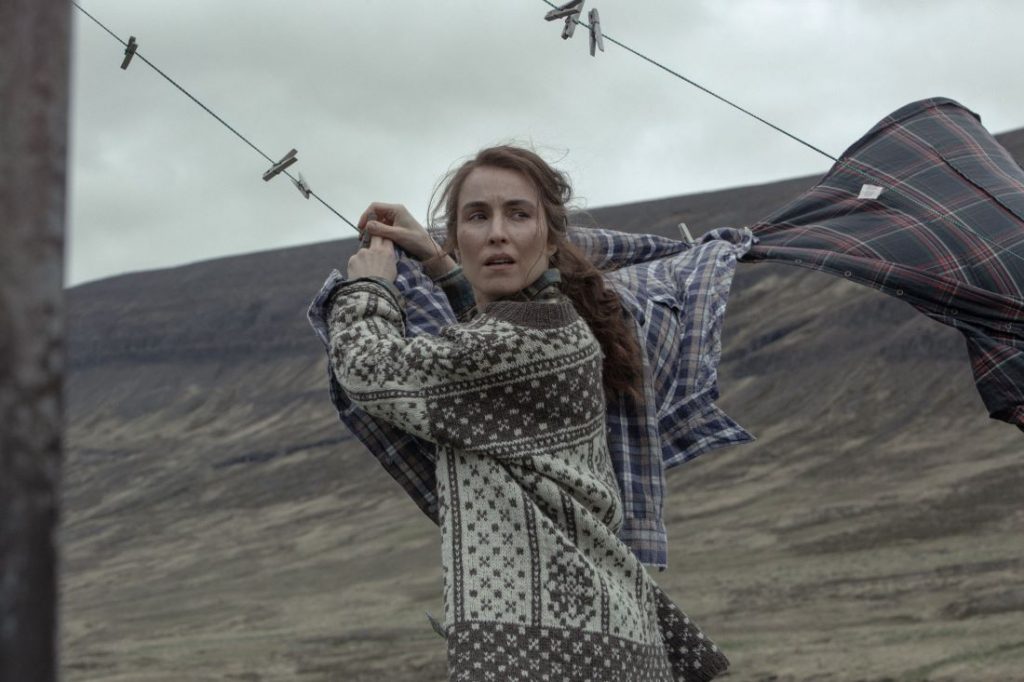 Sjón: From the beginning, there was this third character that was different from these two reserved persons.

After we decided that the couple would not leave the farm — that there would not be any outside authority or strangers to the family coming to the farm — we realized that Pétur needed to come into the story to question what was going on.

This is a very classic tale: The bad brother returns from the city. The prodigal son returns. You have it in American theater over and over again. The damaged brother or sister returns and challenges the nice little world that people have made for themselves.

We were quite decided on not going into the outside world, so Pétur had to somehow be thrown into this world. You would just have to take him at face value. You would instantly realize that this is the troublesome guy returning to the countryside. We had already decided that he would be a failed musician. So what better than to bring this gang of people driving this car with some music, that definitely didn’t belong to any of the things that you’d seen before on the farm. He would just be thrown into the story — that was how he was going to be introduced.

Valdimir Jóhannsson: At one point we had more scenes with him. That car trip was a little bit longer.

Sjón: The trip was longer, so we got to know him a little bit better on the journey. That was also because we wanted to show how remote the valley is.

Jóhannsson: But it was so strong. He’s just thrown into the story. We didn’t have to know more — it was not necessary.

Mass: How Fran Kranz Wrote the Script for the School-Shooting Drama
No Time to Die Cinematographer Linus Sandgren on Finding the Soul of James Bond