Mass: How Fran Kranz Wrote the Script for the School-Shooting Drama 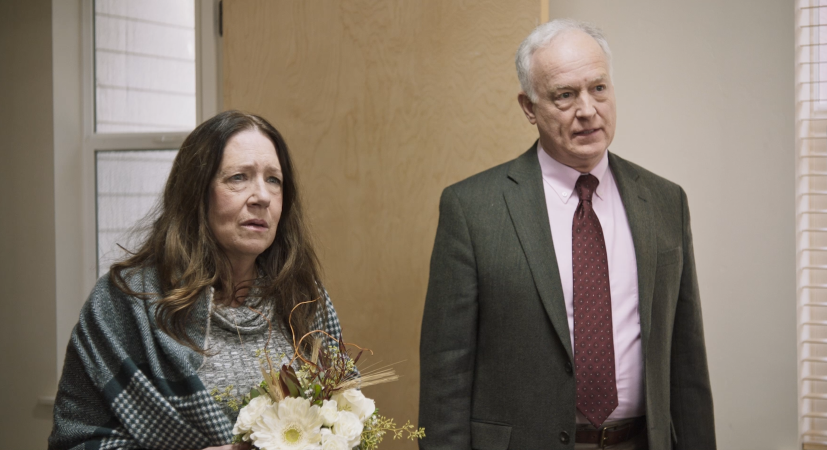 Veteran actor Fran Kranz is the writer-director of Mass, a school-shooting drama which revolves around a reconciliation meeting between two sets of parents. In this feature, Kranz explains how he wrote the conversation in that extended scene.

Mass takes place almost entirely in one room with four actors seated at a table. Jason Isaacs and Martha Plimpton play the parents of a murdered boy; Reed Birney and Ann Dowd play the parents of his shooter. Their conversation lasts just over 75 minutes. I’m focusing here on the writing of that conversation even though the film has scenes around it. It’s not that they are less important — it’s that the biggest challenge of the writing process was completing the conversation.

The film was conceived after the Parkland shooting on February 14th, 2018. I was a new parent of a one-and-a-half-year- old and I was scared and concerned by the frequency of these tragedies. The very next day I began ordering books about mass shootings in America. Looking back through my files, my first saved draft of Mass was on April 8th, 2018. The first complete version was in August 2018, and by October of 2018, I was exchanging emails with Reed Birney about playing the role of Richard. We were shooting the film 13 months later, in November of 2019.

I share the timeline to emphasize how consumed I was with the story and subject matter. I spent essentially two years reading only about mass shootings. Based on the dates of my initial Final Draft files, it wasn’t long after the Parkland shooting that I had the idea down on paper. 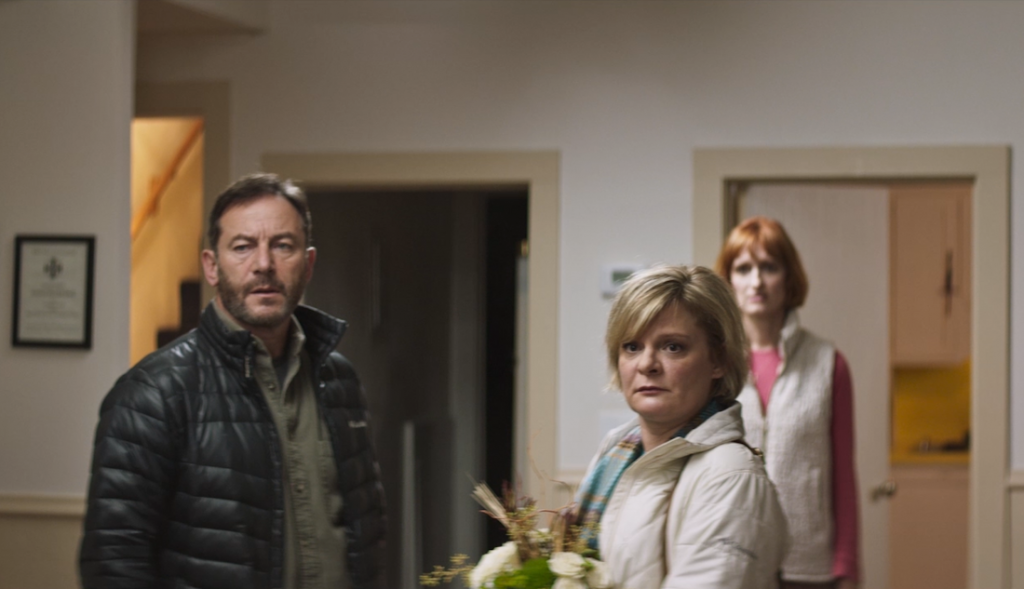 It takes this kind of focus and dedication to get the job done. Writers’ block will inevitably happen. I try to walk away and pick up another activity as quickly as possible when it does. However, when the passion and inspiration are there, drop everything and write.

To capture ideas, I had legal pads, journals, and, as a last resort, the Notes app on my phone. I remember carrying around a bank statement because I had written some lines of dialogue on it. The story was always with me. I scheduled time away from family and on weekends to write. It was like being in a new relationship. We went on dates and vacations together. I put a lot of time and effort into it, and when we were apart, I was always thinking about the story.

I thought I could write the screenplay in one long sitting, allowing for redundancies and contradictions, because that is how I believed people talked in real life. This was naïve. While the conversation shouldn’t be neat or linear, it just wasn’t practical to sit down and let my emotions lead me to the finish line. Trying to defend each character, believing each character was right, created many impasses in the conversation.

I approached writing as an actor. I played the parts. I improvised. The characters were in part inspired by aspects of real people, but they were also the result of my effort to be in their position as a parent. What if my son did this, or what if I lost my child this way? I tried to tell each perspective truthfully. I wanted them to be heard and defended. This created a bit of a multiple-personality disorder.

When writing organically failed, I relied on research. I’d go back to books and articles, and when a statistic or personal detail leapt out at me, I’d get back on my computer and start improvising a new scene. For example, I read about a meeting where parents had shared photographs of their children. To want to reveal the past of a life that was so painfully cut short — with the very people you might feel are partly responsible — seemed both courageous and reckless. I had to explore that.

At some point, my playing/writing the role of Gail (who is played by Plimpton) took over. Gail and I both felt, “Why am I doing this? I want to hurt these people, not share my child with them.” So Gail and I decided to show a picture of her family from their last Christmas together. We wanted to show them the happiness they took from us. Linda (played by Dowd) cries as a result. Gail’s righteous anger ruins the moment.

Another example was reading about a shooting in Santa Monica, California in 2013. The shooter had assembled a gun by buying parts online to create a completed weapon he may not have been able to purchase legally. I believed the character of Jay (Isaacs) would pounce on something like this as evidence of a loophole that needed closing, through more comprehensive gun reform. But for Richard (the father of the shooter, played by Birney), the situation was evidence that someone will find a way to be violent no matter what the laws are. Richard would believe that person needed help long before reaching that point.

These moments were written as singular scenes. I abandoned trying to finish the conversation as a whole. Whatever inspired me in the research turned into essentially a short improvised scene. If I looked at the big picture too often, it would be demoralizing. Once I had enough of these smaller scenes, I was more forgiving of the still-incomplete larger scene. I could see great fragments, so I just had to trust that they would come together. 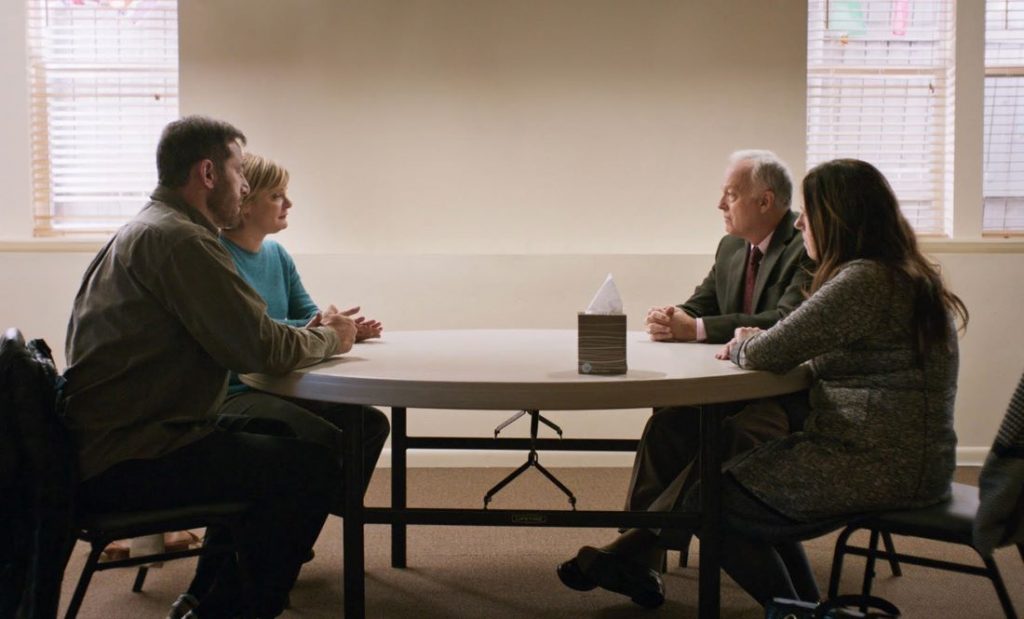 They did come together, but that was by far the hardest part of the process. I knew where my point A and point B were, but filling in the journey was exhausting. I reminded myself that at the very beginning I believed the conversation would be messy. It would not be linear. The characters would be redundant or contradict themselves. This reminder served as an eleventh-hour inspiration, and reinvigorated the writing process. As an exercise, I would take two smaller scenes that I loved but that had no clear connection to one another, and improvise a way to bridge them together. It didn’t matter to me how forced or contrived it felt initially. There would naturally be lulls in the conversation, or moments of silence where one person decides to simply start a new topic. I suddenly didn’t feel the burden of making everything flow so neatly. This conversation would be excruciating, so one would naturally throw out a lifeline by jumping to another subject or introducing a new idea.

Of course it took some polishing and refining, but between my point A and B, the natural longer chunks of dialogue I already had, and some admittedly more forced segues, I finally had a complete conversation.

The next stage of the process was sharing the script and taking notes. I tried to be as open as possible. I’m not an experienced writer, so I tried to be humble and respectful of every note — even the ones I hated. A note might not be right or work for you, but I think it’s always worth imagining it incorporated into the story anyway. I never wanted to use flashbacks or cutaways during the conversation. I was adamant that the scene should have no interruptions. One day though, after hearing for the thousandth time that I should consider leaving the room, an image of a field popped into my head. I knew immediately where it had to be placed. The recurring image of the field is now a central part of the movie, and something that means a great deal to me. Even the notes you hate might inspire something you’ll love.

The most critical part of the writing process came once I had my cast. I had two read throughs before having the final cast, but I could have benefitted from more. Get actors involved as much as possible — not just to hear the words out loud, but to ask them questions. Ask where they felt they were forcing the words or faking the emotion. Ask anything. Harley Granville-Barker has a great quote about this. “Let him realize that the more he can learn to ask of the actor, the more will he gain for his play.” We were trying to achieve verisimilitude, and if an actor felt the slightest discomfort with a line, I wanted to know. Asking these questions of the final cast was the biggest breakthrough for the script.

We had a three-day rehearsal in New York about three weeks before the shoot. We just sat around a table and dissected the script. I was concerned that we never actually read through it in one sitting. But looking back, the intense scrutiny of every line was far more valuable. Actors have insight into human behavior, and good instincts. I had very talented actors. It was critical that I listen to them. If they felt something was wrong, it likely was. If they felt more comfortable with a small change of word choice, I let them have it. If they felt a beat was missing in their emotional journey, we had to find it, or we had to create it. In essence, the actors became co-writers. I think of that rehearsal as the largest leap in the improvement of the script. It was the shortest stage of the writing process, but easily the most important.

Of course there are things that you will feel are sacred: moments that you know don’t fit neatly into intellectualized story beats, or actors’ through lines. You might have to fight for these moments, or encourage the actors to trust that the moment will carry them—or at least the audience. These things are harder to keep, rationalize, and explain to people, but you should fight for them.

I was very discouraged at one point in the editing process. During that time, a friend told me that there is an “artistic sacrament” a writer has with his work. If you compromise too much, you break that sacrament and the thing lost is you. They were heavy-handed words, but exactly what I needed to hear. You should be proud of what you create 15 or 20 years from now, if only because it remains an authentic expression of who you are and who you were. Knowing where these lines and boundaries are will sustain your passion.

Mass, written and directed by Fran Kranz, is now in theaters.