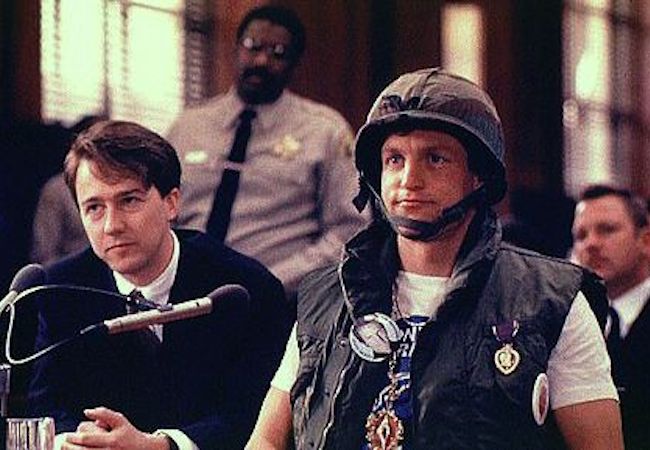 In today’s Movie News Rundown: R.I.P. Larry Flynt; memories from the writers of The People vs. Larry Flynt; I Blame Society is a found footage movie that makes sense; everyone is in trouble.

An Honest Found Footage Movie: Gillian Wallace Horvat, the writer-director-star of I Blame Society, wrote this compelling piece for us about how most “found footage” films cheat — and how her own found footage film follows rigorous rules.

R.I.P., Hustler: Larry Flynt, the pornographer and First Amendment activist played by Woody Harrelson in Milos Forman’s The People vs. Larry Flynt, has died at 78. Flynt made no apologies for his love of smut, but he fought “without question my most important battle” over satire, not porn. Televangelist Jerry Falwell sued him over an ad parody that appeared in Flynt’s Hustler magazine in 1983, and the Supreme Court unanimously ruled that such parody of a public figure was protected speech. Remarkably, Flynt and Falwell later became friends, as Flynt wrote in this Los Angeles Times piece. No cause of death was released.

Also: In the very first MovieMaker podcast we ever made, The People vs. Larry Flynt writers Scott Alexander and Larry Karaszewski explained how Hustler v. Falwell made it legal for them to make a Flynt biopic. Under the Supreme Court ruling, Larry Flynt, a public figure, was fair game. It’s at the 14:45 mark.

Everyone Is In Trouble: From Joss Whedon to The Mandalorian star Gina Carano to… Bruce Springsteen?

Or Maybe Not Bruce Springsteen? His (terrible) new Jeep ad was pulled when TMZ reported that he was cited for DWI in November. But The Asbury Park Press, the Boss’s hometown paper, says his blood-alcohol level was one-fourth the legal limit when he was stopped on suspicion of DWI last year. Bruuuuuuuuuuce!

How Is This a Movie Story? Bruce was the subject of the 2019 documentary Western Stars and his songs were the focus of the 2019 musical drama Blinded by the Light.

Anyone… Not in Trouble? Things are going great for Carano’s Mandalorian comrade Pedro Pascal, who was cast in HBO’s adaptation of The Last of Us video game, Deadline reports. He was also among the actors just announced for Judd Apatow’s actors-in-quarantine comedy The Bubble.

The Little Things and Inception: MovieMaker managing editor Caleb Hammon noticed some interesting parallels — and differences — between the 2002 Christopher Nolan film and the new thriller with Denzel Washington, Rami Malek and Jared Leto. (Leto was my favorite part.)

Leave Bruce Alone: He made this.