People vs. Larry Flynt Writers Say Flynt’s Own Lawsuit Gave Them the Legal Right to Tell His Story 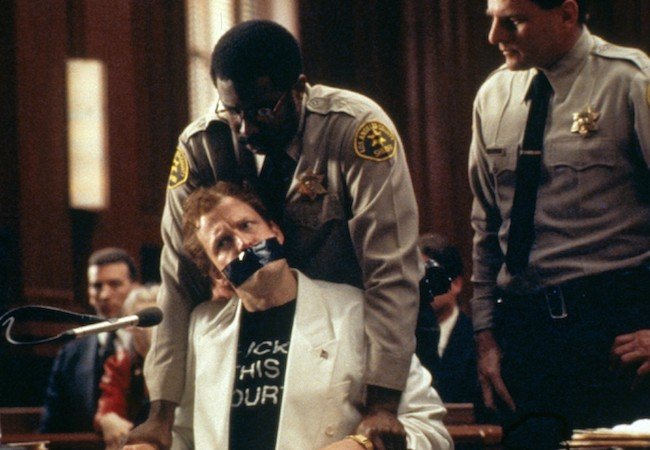 When The People vs. Larry Flynt writers Scott Alexander and Larry Karaszewski were asked by studio executives if they had the legal rights to the story, they confidently answered that they did — thanks to a legal precedent set by Larry Flynt.

In 1983, Flynt’s Hustler published a parody ad belittling then-popular televangelist Jerry Falwell. The Supreme Court ultimately ruled the such parody of a public figure was protected speech. (Remarkably, Flynt and Falwell later became friends, as Flynt wrote in this Los Angeles Times piece. No cause of death was released.)

When it came time to pitch their movie about the case, Sony asked Alexander and Karaszewski — hot off the biopic Ed Wood — if they had the legal right to tell Flynt’s story. Alexander told MovieMaker in 2019 that they were originally “very cavalier” about the legal rights, and just wrote the best story they could, without thinking about potential lawsuits.

“He ended up being a pussycat,” Alexander said.

You can hear the full story at the 14:45 mark of the MovieMaker podcast:

And Alexander and Karaszewski continued their long run as the kings of biopics, going on to tell stories about Andy Kaufman (Man on the Moon), O.J. Simpson (The People vs. O.J. Simpson), and Rudy Ray Moore (Dolemite Is My Name), among many others.

You can hear them talk about the process of making all of those films on the podcast.

Gary Oldman Doesn’t Think Citizen Kane Is the Best Movie Ever — Or Even the Best Orson Welles Movie
The World to Come: Casey Affleck, Katherine Waterston and Mona Fastvold on Their Pioneer Romance