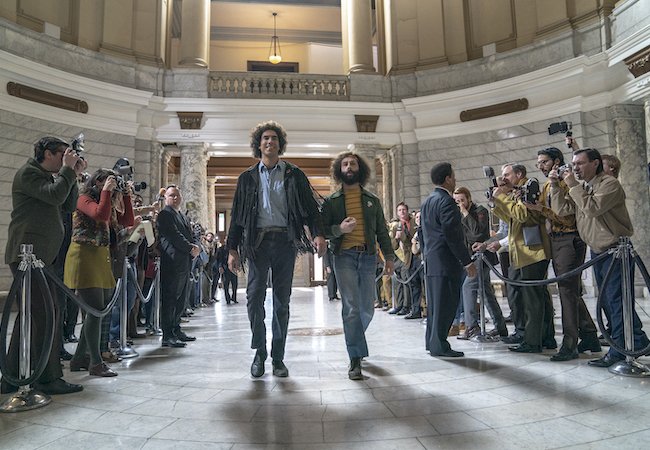 In today’s Movie News: What you missed if you didn’t watch last night’s Princess Bride reunion; a drive-in Nomadland screening gets people honking; a first-look at Aaron Sorkin’s timely and talent-packed Trial of the Chicago 7. Plus: how to make a movie with just five people.

‘As You Wish’: Billy Crystal wore his Miracle Max hat. Rob Reiner shared some of his last moments with his father. Carole King called the president a “LIAR!”And Mandy Patinkin urged us all to get out of the revenge business. The original Princess Bride cast, joined by a few new faces, gathered online last night for a charming reading of William Goldman’s flawless script to raise money for Democrats in Wisconson, and we have this report on how it went.

Nomadland at the Drive-In: And here’s our report from the drive-in premiere of Chloé Zhao’s new film, which just won Best Picture at the Venice Film Festival. Frances McDormand stars as one of a transient community of people living in vans and RVs, picking up work at Amazon warehouses and parks. In a post-film Q&A, a real-life nomad got the whole crowd honking in support of nomadic life when it said giving up houses could save the planet.

Speaking of Vans: Director Greg A. Sager walks us through how he shot a film in his apartment in compliance with London, Ontario’s guidelines limiting gatherings to just five people. He needed a sixth crew member for Open Your Eyes — so the sound mixer worked from a nearby van.

Huge Sale: Netflix paid $30 million for Malcolm & Marie, a film shot on lockdown with John David Washington and Zendaya, Deadline reports. Netflix has also acquired Pieces of a Woman, which I saw over the weekend out of the Toronto Film Festival and includes a beautiful, heartbreaking performance by Vanessa Kirby. The acting is excellent throughout.

1BR Sequel? The horror film, which rose to the top of Netflix’s film charts with little budget or promotion, has ideas for a sequel if enough people watch the original, according to a weekend tweet from its account. In the latest Low Key podcast, we talk about why 1BR sets up a sequel perfectly. You can listen to on Apple or Spotify or right here:

Pray for the Royal Napkin-Folder: This guy gets why I love The Crown:

This is every single episode of The Crown pic.twitter.com/FS684xa1Yg