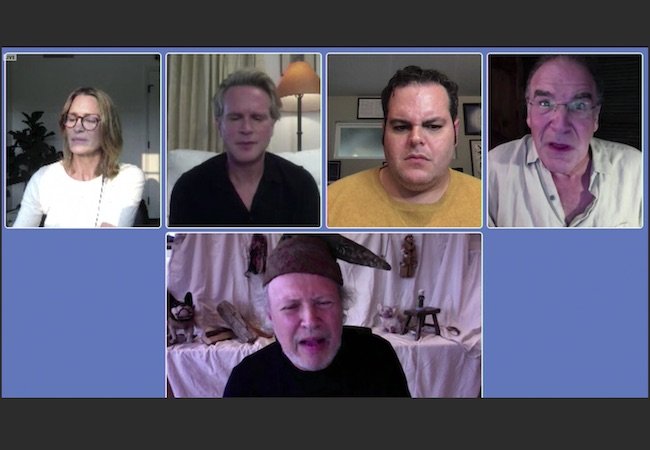 The original cast of The Princess Bride reunited Sunday night for an online live reading of the film’s script to raise money in hopes of helping Joe Biden win Wisconsin.

Or, as director Rob Reiner put it, “saving democracy.”

The original stars of the 1987 film — Cary Elwes, Robin Wright, Mandy Patinkin, Wallace Shawn, Billy Crystal, Christopher Guest, Chris Sarandon, and Carole Kane — were joined by Whoopi Goldberg, Josh Gad and Eric Idle, among others. Finn Wolfhard and Rob Reiner filled in for Fred Savage and the late Peter Falk as the grandson and the grandfather. Gad replaced Andre the Giant, whose ability to put away wine was the subject of much discussion in a post-reading Q&A hosted by Patton Oswalt.

Technical glitches including echoes and glitchy wifi hindered the production, but William Goldman’s masterful dialogue won out in the end. Audio issues couldn’t diminish the power of Elwes’ “to the pain” monologue, or Patinkin’s mantra, “My name is Inigo Montoya. You killed my father. Prepare to die.”

The Q&A included the cast taking turns teeing off on Donald Trump. At one point, Elwes asked Kane, “What kind of person is President Trump?”

She responded in character as the raspy, ferocious Valerie: “LIAR!”

The Milwaukee Journal-Sentinel reported that at least 100,000 people paid at least $1 to tune in. Elwes said he pulled the event together after asking a friend from Wisconsin how he could help Democrats win the crucial swing state.

“And she said, ‘Well, what about getting the old band back together? You know, The Princess Bride guys? And I said, Well, I’ll try.”

Crystal, meanwhile, joked that his character Miracle Max lost his place in the castle – despite his ability to raise the dead — because he wrote a book revealing that Prince Humperdinck “didn’t care about the plague.”

Reiner said his father Carl Reiner, who died earlier this year, wished he could have lived to see Trump lose re-election. He said that one of the last things they did as father and son was re-enact the dialogue between the grandfather and grandson, and that his father’s last words on camera were the ones from Wesley to Buttercup and the grandfather to the grandson: “As you wish.”

“It means a lot to me,” said Reiner. “And I love the fact that we’ve got 35 years, whatever, and then it can be used for something as good as saving democracy.”

Patinkin said the most surprising person who has ever quoted the “My name is Inigo Montoya” monologue back to him is Sen. Ted Cruz. He cited Inigo’s line at the end of the film: “I have been in the revenge business so long, now that it’s over, I don’t know what to do with the rest of my life.”

“In a world filled with hatred and bigotry, and where black lives do indeed matter, and women’s lives, our planet, our care and decency for each other… We have to stop being hateful and revengeful, and we have to embrace what what William Goldman’s final words were in the script that we just were also blessed to be part of: which is, ‘As you wish.’

Cruz expressed dismay at the fundraiser last week, tweeting, “Do you hear that Fezzik? That is the sound of ultimate suffering. My heart made that sound when the six-fingered man killed my father. Every Princess Bride fan who wants to see that perfect movie preserved from Hollywood politics makes it now.”

Reiner said that he would never make a sequel to the film, noting that Goldman gave up on an attempt called Buttercup’s Baby. But he suggested that famous sayings like “inconceivable,” “as you wish,” and “My name is Inigo Montoya” seemed readily adaptable to a musical.

A link to the Princess Bride reading is here, but Wisconsin Democrats said it would be posted only once. Of course, it’s a movie where Wesley dies and Buttercup marries someone else, but things work out okay in the end. So anything can happen.

How We Shot Open Your Eyes With a 5-Person Team… Plus One in a Van
Movie News: Princess Bride Reunion Details; Chicago 7 Trailer; Nomadland Makes Moves