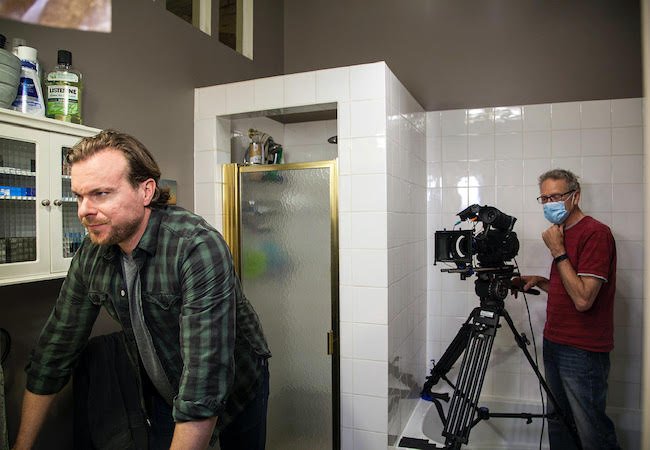 In this piece, writer-director Greg A. Sager, whose films include Kingdom Come and Gray Matter, describes how he, two actors and a small crew shot his new film Open Your Eyes in compliance with COVID-19 protocols in London, Ontario.

It is hard to believe that our film, Open Your Eyes, which is now in the final stages of post-production, didn’t even exist in the early days of April 2020. No script. No crew. No budget. Nothing. With the country and world locking down, we had as much fear and concern as everyone else. But adversity, fear, and uncertainty can be a great motivator.

Just before the pandemic, I was working on a #MeToo thriller called Jane that would have been the fourth film for our London, Ontario production company, Matchbox Pictures. But everything changed as soon as the lockdown began to unfold. As a screenwriter, isolation was nothing new to me. But as we moved into the second month of isolation, it began taking its toll creatively. So I had another idea.

At first when approached the crew and actors involved about shooting what would become Open Your Eyes it was apparent that the script was going to be a little autobiographical, inspired by the entire lockdown situation. I first called Ry Barrett (Kingdom Come, Demolisher), an actor I had worked with before. Before starting the screenplay, which I also planned to direct, I asked if Ry was up for something like this. He was.

I spent the next week hammering out the screenplay while we started locking down locations, financing and all the other logistics that come with filmmaking under normal circumstances. But in 2020 there was nothing “normal” about any of this process.

Knowing we wanted to shoot within a week or two of having a finished script, we looked to casting the female lead. I remembered a standout audition by Joanna Saul for another project, and so we reached out to her about playing the role of Lisa. Fortunately, she said yes as the script neared completion.

Our planned first date of filming would be May 28, and at that time, local health regulations specified a maximum of five people in a group, with physical distancing. With that in mind, I wrote the script exclusively for the two actors now on board. With me and cinematographer Gary Elmer taking up slots No. 3 and 4, that left us with only one available slot (on set) for absolutely everything else. We knew we needed some solid versatility, so we called Michael M. Down, a crucial collaborator.

Having worked on three past films with us, we knew he was capable of so many production roles. He is more than a 1st AD, AC, Key Grip, Gaff or PA; he is someone who just makes stuff happen, our “Magic Mike.” Like the rest of us, he wasn’t working on anything, because of the industry shutdown, and so he was all in to join the project. 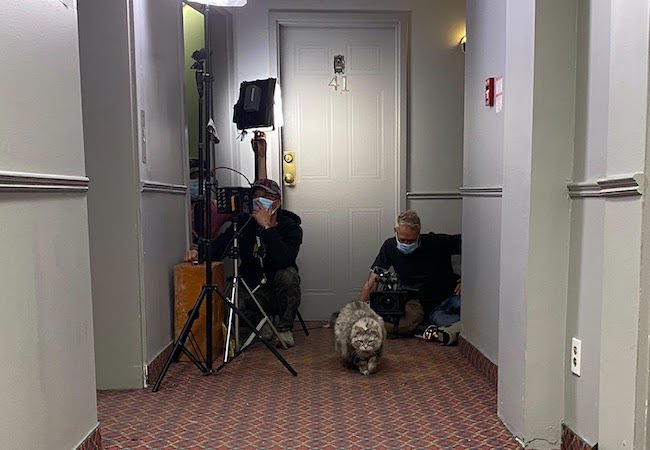 Writer/director Greg A. Sager (at monitor) watching the performance of a furry co-star in Open Your Eyes as director of photography Gary Elmer rolls the camera. Main image, above: Actor Ry Barrett readies himself for a mind-bending bathroom scene as Elmer looks on.

Since we weren’t planning on making a silent film, we still needed a sound mixer, so we reached out to our longtime collaborator and location sound mixer, Steve Scott, our fourth essential on-set crew member. Being at the five-person limit on set already, we devised a plan so that Steve could sit outside in the parking lot in his van, mixing the sound from afar. This was a new challenge for Steve — mixing an entire film while not being able to see what was happening on set. He ended up mixing two shotgun mics on stands and the two wireless packs for each of our actors.

Mike and Gary, beyond their normal duties, were now responsible for positioning the shotgun mics in as close as possible with each new setup, which added an additional challenge. Communication between Steve and the camera crew was done directly from the mixer through the feed to camera. Ry and Joanna, beyond having to do all their own makeup and wardrobe, were also responsible for putting on their own lav packs and changing the batteries when required.

With the entire “on-set” cast and crew totaling a whopping five people inside and one sound person outside in the van, we also had a network of outside support crew who never set foot on set and worked remotely. Producers Fran Tran and Caroline Bonham would regularly pick up and drop off anything that we needed. It was important to contain our “isolation bubble” and not have anyone from the on-set crew run off for something that would put them into contact with people outside the bubble. Each morning, our assembly editor Aliya Haggis would come to location to pick up sanitized and bagged hard drives with the previous day’s footage for backup and assembling at an off-site location.

All cast and crew completed a health screening questionnaire, wore masks on the set all day long, and were vigilant about keeping six feet away from one another, even though some days ran as long as sixteen hours. The early, hard-to-find, first-wave face masks were absolutely horrible with uncomfortable ear elastics that would often snap off. We went through hundreds of those. And nothing can fog up a person’s eyeglasses quite like a mask. With a huge parking lot directly out the back door of the main set, and lucking out with great early summer weather, we got outside and removed the masks whenever possible.

Standing what seemed like a mile away from one another felt reminiscent of a classic rock band album cover from the seventies. Every opportunity to get outside was amazing. Breathing oxygen without a mask was a beautiful thing.

Food safely was also a big concern. The days of the buffet and craft tables had now gone the way of the dinosaurs. Since the main location was my apartment, and since I’d worked many years in the restaurant industry, I cooked some of the meals for the cast and crew. We had other meals delivered from nearby restaurants, and we were happy to support these local businesses since the pandemic meant hard times for everyone. There was absolutely no eating or drinking on set. All food was consumed outside so that no masks (other than the actors’ masks) ever came down or off indoors, not even for a second. Meals were individually prepared and packaged, and when food was delivered, one person would wash their hands and put on gloves and a mask before handing out the individually packaged meals.

Bottles of hand sanitizer were strategically placed around the set with one just outside the door for use before returning to set. We also regularly took the time to have everyone on set stop and wipe down all the gear and commonly touched surfaces with anti-bacterial wipes.

Matchbox Pictures has always been an agile and compact group of creators. Filming during Covid-19, though not without challenges, was easier to us than it probably is for larger productions. We would prefer not to have to film like this in the future, but we figured it out, and are proud of what we accomplished. Creating Open Your Eyes also kept us working on what we love to do, and most of us can credit it with helping us hang onto our sanity during this unusual and unprecedented time.

Here’s more on Open Your Eyes on IMDb.

‘We Called and Asked’: Frances McDormand on How Nomadland Gained Access to Amazon
Princess Bride Cast Reunite in Hopes of ‘Saving Democracy’