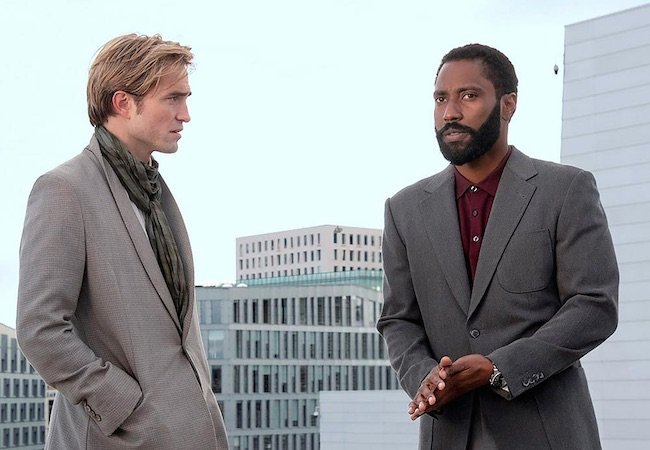 Box Office Best-Case Scenario: The Hollywood Reporter says that if theaters re-open by mid-July, North American box office revenue might hit $7 billion for the year, according to London-based research firm Gower Street Analytics. That would be the lowest box-office total in two decades. Christopher Nolan’s Tenet, pictured, has stuck to its July 17 release date while countless other films this year have moved, and Disney’s Mulan has moved to a July 24 release date.

No Cannes Do: Cannes Film Festival director Thierry Fremaux tells Variety that Cannes won’t go virtual, as several other festivals have done. “Films by Wes Anderson or Paul Verhoeven on a computer? Discovering Top Gun 2 or (Pixar’s) Soul elsewhere than in (a) theater? These films have been postponed to be shown on a big screen; why would we want to show them before, on a digital device?” he said. Cannes has been pushed back from May to late June or July.

Gucci and Gaga: Deals may be happening over Zoom, but they’re still happening. The Hollywood Reporter says MGM has acquired Ridley Scott’s Gucci, about the murder of fashion icon Maurizio Gucci, and that Lady Gaga is in negotiations to star as Patrizia Reggiani, Gucci’s ex-wife, who was convicted of orchestrating his killing after he had an affair. Also: Is it just us, or has Zoom become the Google to Skype’s Yahoo? We’re still sticking with Skype, for now.

RIP John Prine: The plainspoken singer-songwriter whose deceptively simple songs held deep reserves of empathy, died at 73 from complications of COVID-19. His song “Angel From Montgomery” appeared in the films Rush, Courage Under Fire and Into the Wild. As it happens, Roger Ebert wrote Prine’s first review, which was headlined “Singing Mailman Who Delivers a Powerful Message in a Few Words.” Here it is.

Gamers Are Used to This: One of the main creative forces behind the Assassin’s Creed video game series says gamers may be better than the rest of us at quarantine, because they spend so much time to begin with. Alexandre Amancio told MovieMaker that gamers now have “more time to spend in a world they already like visiting in, with the people they already know.” Here’s our full interview with him about world-building, which should be of interest to anyone who has ever dreamed of writing a simple story… and expanding it into a Star Wars or Game of Thrones-style universe. You can also listen to the podcast version on Apple, on Spotify, or right here:

RIP Allen Garfield: The veteran of The Conversation, The Candidate, The Stunt Man and Nashville died of COVID-19 complications at age 80, Deadline reports. He also appeared in Bananas,  The Cotton Club, Beverly Hills Cop II and Until the End of the World, among many other films.

Need a Boost?: If you’re an independent filmmaker, film festival organizer, or theater manager doing something that raises all boats in these difficult times, we’d love to highlight your work. Feel free to email me at Tim.Molloy@MovieMaker.com.

This Might Amuse You: We at MovieMaker watched the 1968 Thomas Crown Affair over the weekend, then read this THR review of the film. Good lord, now this is a review, by a critic, John Mahoney, whose technical expertise should stun many of the Tomatometer®-approved critics of today.

And now, another link to a the day’s of yesteryear, specifically: yesterday’s movie news.