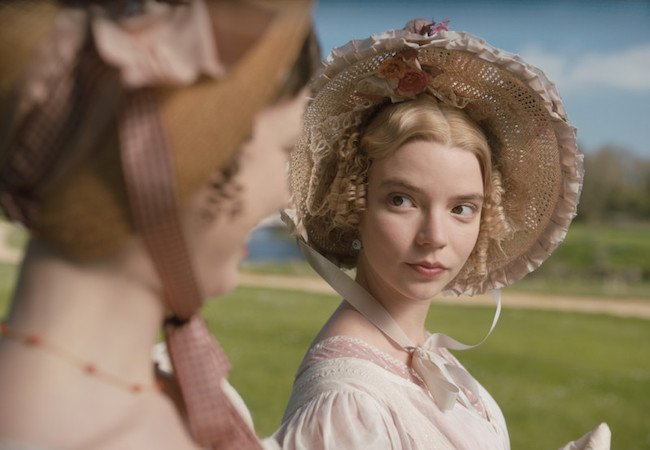 Welcome to MovieMaker’s Movie News Roundup, where we have a surprising amount of movie news, given the circumstances. You’ll be able to watch some brand-new movies at home soon, Idris Elba will probably be watching them too, and it’s time to write that screenplay.

Black Widow Delayed: This just in: Black Widow’s release date is delayed, because of course it is. This looks like a job for Variety.

Start That Screenplay: Here’s a story about writers making the best of this time at home by doing what writers do. If you’ve been meaning to start a script, do it. You have no distractions, and your mind deserves a break from thinking about the real world.

Reinforcements Coming to VOD: With theaters closed, Universal is offering several new releases on-demand this Friday: The Hunt (seen it, great), Emma (pictured above), and The Invisible Man. (Will audiences be able to relate to the story of a scary invisible adversary some people refuse to accept as real? Hm.)

Also: Warner Bros.’ Birds of Prey and STX’s The Gentlemen will be available on-demand on March 24, according to The Hollywood Reporter.

And for the kids, Trolls World Tour arrives on-demand April 10.

These early releases are a test for studios on how much they should change their distribution strategies in the coming weeks, with so much uncertainty about when we’ll be able to publicly gather again.

Movies and TV Shows Impacted by Coronavirus: At this point it might be easier to list projects that aren’t impacted. But here’s a helpful list from Variety.

Lessons From the Past: Curious how the theater shutdown might affect the industry, Karina Longworth, creator of the brilliant You Must Remember This podcast, looked back at the flu epidemic that shut down theaters in 1918. You can listen here.

Idris Elba Doing OK: Elba tweeted that he had tested positive after exposure to someone else who tested positive. His wife, Sabrina Dhowre Elba, appeared with him on video. “I’m doing OK. Sabrina hasn’t been tested, and she’s doing OK. I don’t have any symptoms.” They are under self-quarantine. Other film stars who have tested positive include Tom Hanks, Rita Wilson, Olga Kurylenko and Kristofer Hivju, best known for playing Tormund on Game of Thrones.

This morning I tested positive for Covid 19. I feel ok, I have no symptoms so far but have been isolated since I found out about my possible exposure to the virus. Stay home people and be pragmatic. I will keep you updated on how I’m doing 👊🏾👊🏾 No panic. pic.twitter.com/Lg7HVMZglZ

12 Inspirational Movies That Aren’t Fake and Annoying: From Dunkirk to Glory to All the President’s Men to Queen of Katwe, here are some movies that will remind you that there’s nothing we can’t get overcome, without being cloying and dopey about it.

Box Office Hits 20-Year-Low Because of Course It Has: Perhaps they just aren’t making movies like they used to? Maybe audiences are turned off by all the godlessness and crude profanity? What? You say it’s something else? Let’s see what Variety has to say.

Theaters Closing: Theaters are closed in 32 international markets and are shutting down in the U.S. as well, The Hollywood Reporter says. This is the only responsible step given the CDC’s call for us to halt gatherings of 50 people or more. For the layperson who doesn’t write for an impressive industry trade, “markets” are also sometimes known as “countries.”

Westworld‘s Big Prediction: You know things are weird when HBO’s robots-are-taking-over show Westworld feels optimistic. Westworld co-creator Jonathan Nolan tells THR one thing you can take to the bank: The future will have self-driving cars. Also, while you’re at the bank, see if they’ll let you exchange all your money for hand sanitizer. Just kidding: Don’t dare go to the bank.

Hanks Thanks: “Thanks to the Helpers. Let’s take care of ourselves and each other. Hanx,” Tom Hanks tweeted from his Australian quarantine with wife Rita Wilson. It’s a reference to Mister Rogers, who Hanks earned an Oscar nomination for playing in last year’s A Beautiful Day in the Neighborhood. Rogers, who died in 2003, used to share some advice his mother gave him in scary times. “My mother would say to me, ‘Look for the helpers. You will always find people who are helping. To this day, especially in times of ‘disaster,’ I remember my mother’s words, and I am always comforted by realizing that there are still so many helpers — so many caring people in this world.”

A Note About Sourcing: This Movie News Roundup is one of the less-important things on the internet, but you’ll notice that even when sharing mere movie news, we always include links so you can see the sources of everything we’re saying. If you’re seeing people on social media sharing “rumors,” texts from imaginary relatives, or whomever, with no citation and no link to a reputable source, practice some social distancing. Let’s band together and agree that if it doesn’t have a source, we ignore it. Maybe some terrible clickbait-driven, fear-monger hacks will be forced to change their ways. If not, they’ll be the first ones we turn into soylent green.