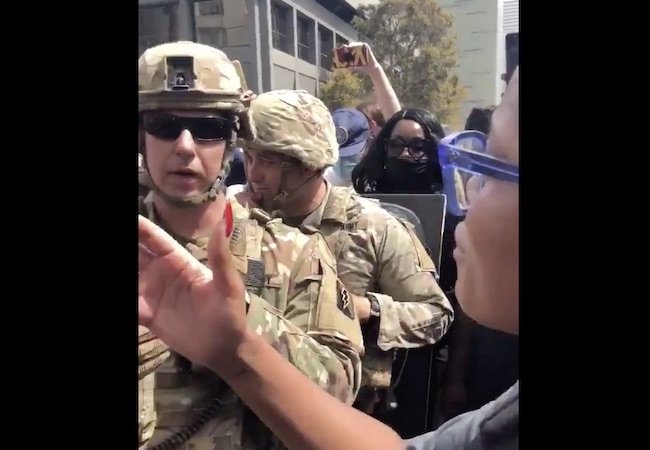 In today’s Movie News rundown: A conversation between Keke Palmer and National Guardsmen becomes a defining moment in the demonstrations; Bad Robot donates $10 million to good causes; and a Justice League discussion. Plus: The Donut King, a documentary we love, is making progress.

More Than Talk: Now that everyone from Disney to ViacomCBS  to Netlix has talked a good game about fighting racial injustice, they’re “scrambling to put together plans to back up their pledges,” according to The Hollywood Reporter. Off to a good start are Bad Robot, which pledged $10 million to groups including Equal Justice Initiative and the Black Futures Lab, and A24, which said it would donate $500,000 to Black Lives Matter and National Bail Out.

Keke Palmer and the National Guard: More than 15 million people have watched video of an emotional negotiation between National Guardsmen and Keke Palmer in Los Angeles. Palmer, star of Hustlers and Akeelah and the Bee, asked the guardsmen to march with demonstrators. One of the guardsman said they couldn’t abandon their posts because they needed to guard businesses. But he and other guardsmen did agree to take a knee at the request of another demonstrator. Palmer later told Good Morning America she decided to engage the guardsmen when she wondered to fellow demonstrators, “Why are they not with us? Why are they not able to be with us? Here we are marching in peace, and with purpose, and I’m sure many of them feel the same way as we do. And I wanted to just unite as human beings above all.” Here’s the video:

Watch all of this. pic.twitter.com/YHq0QhXrnw

Time to Make the Donuts: Deadline has an update on The Donut King, one of several films on our list of documentaries that deserve distribution but didn’t get proper debuts because of COVID-19. The update is that UK company Independent has signed on to try to sell the film internationally. The Donut King, by Alice Gu, is the roller-coaster story of Ted Ngoy, who fled Cambodian genocide, started a chain of donut shops, and used them to help fellow refugees build new lives in America.

What We Want From Zack Snyder’s Justice League: In the latest Low Key podcast, Aaron Lanton, Keith Dennie and special guest Sam of the Sam Said It podcast break down Zack Snyder’s plans to rework Justice League. (They also talk about who is and isn’t wearing masks in their respective states, Tennessee and Texas.) You can listen on Spotify or right here by clicking the arrow:

Renny Harlin Filming in Finland: Die Hard 2 director Renny Darlin will return to his home country of Finland to shoot a new comedy under new COVID-19 precautions that will include “a full-time on-set health professional to monitor guidelines around safe social distancing and various hygiene procedures,” The Hollywood Reporter says. Harlin also plans to use VFX to create more physical distance in group scenes.

Comment of the Day: Last week, Vast of Night director Andrew Patterson wrote for MovieMaker about the origins of his atmospheric UFO drama. Roger Pugliese replied: “We watched this film last week and thought it was done really well. This kind of movie can be studied by all film makers and it taught some valuable lessons. Choreographing those shots was poetry in motion. Bravo.”

Movie News: Today is Blackout Tuesday
Will SVOD Kill Indie Films? Here’s Exactly How Much I Spent — and Made — on My Debut Film Regionrat