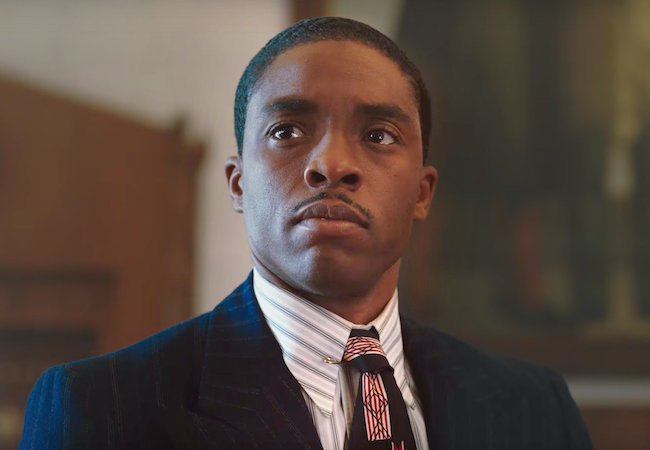 In today’s Movie News: Memories of Chadwick Boseman from Ryan Coogler, President Obama, and more; a Sean Baker update; and some Fantasia Festival films that deserve your attention.

‘I Realized That He Was Living With His Illness the Entire Time I Knew Him’: Black Panther director Ryan Coogler wrote a beautiful tribute to Chadwick Boseman, who died Friday after a four-year fight with colon cancer that even some of his closest colleagues didn’t know he was fighting. “Because he was a caretaker, a leader, and a man of faith, dignity, and pride, he shielded his collaborators from his suffering,” Coogler wrote. Black Panther is the most successful film ever with a predominantly Black creative team and cast, was the highest-grossing film of 2018, and earned a nomination for Best Picture. It globally redefined what a super hero looks like, and unlocked doors for countless other films.

Jackie Robinson, James Brown and Thurgood Marshall: After breaking into movies in his 30s, Boseman played, in quick succession, three of the kinds of roles that can make actors so solemn and responsible that their characters don’t feel real. Boseman didn’t play them as perfect men swept inevitably into history, but as strivers who recognized the appalling obstacles before them and still pressed on — calculating, bluffing, never revealing the toll of their struggles. “Boseman made each man sexy, contemplative, certain,” wrote The New York Times‘ Wesley Morris.

Tributes: “Chadwick came to the White House to work with kids when he was playing Jackie Robinson,” President Obama wrote. “To be young, gifted, and Black; to use that power to give them heroes to look up to; to do it all while in pain – what a use of his years.”

Angela Bassett wrote that during the premiere party for Black Panther, Boseman reminded her that when she had received an honorary degree from Howard University, his alma mater, “he was the student assigned to escort me that day. And here we were, years later as friends and colleagues, enjoying the most glorious night ever!” Bassett played Queen Ramonda, mother of Boseman’s character, King T’Challa.

Years ago, Denzel Washington paid for Boseman and several of his Howard classmates to attend an acting program at England’s Oxford University, and Washington produced one of his final films, Ma Rainey’s Black Bottom. “He was a gentle soul and a brilliant artist, who will stay with us for eternity through his iconic performances over his short yet illustrious career,” Washington said.

More tributes to Boseman, from Joe Biden, Viola Davis, Don Cheadle, and many others, can be found here.

Sean Baker Update: Former Disney actress Bella Thorne announced last week that she’d earned $2 million on the explicit social platform OnlyFans, and planned to work on a film about the experience with the the brilliant director Sean Baker. Baker released a statement published in IndieWire saying he is “NOT attached to this project.” OnlyFans users say that because of Thorne, the platform made changes that hurt the income of sex workers who use it. Baker, who portrayed struggling sex workers with empathy and nuance in Tangerine and The Florida Project, said he had advised Thorne “to consult with sex workers and address the way she went about this as to NOT hurt the sex work industry.”

Can Steven Soderbergh Crack Quibi? Some thoughts on why Soderbergh might be a perfect match for the phone-centric streaming service.

Fantasia Festival: The beloved Montreal festival continues this week online, and we highly recommend checking it out — Fantasia has done an admirable job of reproducing the thrills of the live festival experience. There’s a sense of fun, wonder and danger in its selections. Some of the most striking films I’ve watched so far include the excellent Climate of the Hunter, about a love triangle between two middle-aged sisters and  a man who may be a vampire; Yummy, a gloriously gross Belgian horror film set in a dicey hospital for cosmetic surgery; and Hail to the Deadites, a tribute to Evil Dead fans whose love of the horror saga may win you over even if you’ve never seen it. More on these Fantasia films soon.

Submit to the Micheaux Film Festival: The festival, named for Oscar Micheaux, the first prominent Black filmmaker, welcomes entrants for this year’s event. Micheaux, founded by Emmy nominees Noel Braham and Courtney L. Branch, says its commitment to diversity and inclusion goes beyond buzzwords — it invites “all aspects of individualism and uniqueness,” including race, color, religion, sex, national origin, political affiliation, sexual orientation, marital status, disability, and military service. The event has been held for the last two years at the Regal Cinemas at LA Live.