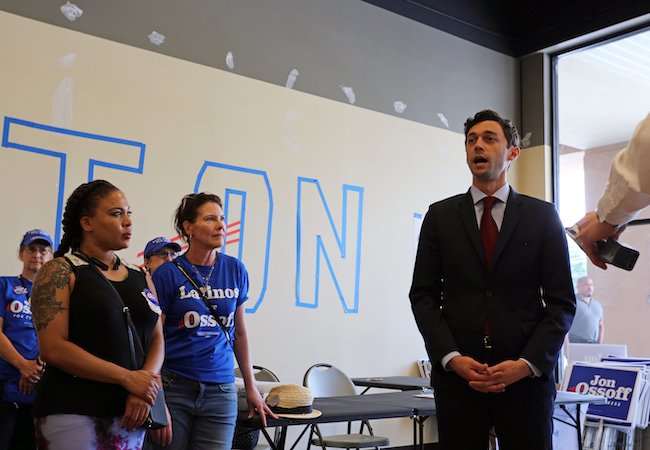 In today’s Movie News Rundown: Jon Ossoff was a moviemaker before his run for Senate in Georgia; Jordan Peele has a fun analogy for quitting acting; and the founders of StudioFest get very transparent about how they started their festival. Plus: An inside look at another festival’s process.

StudioFest: A few years ago, filmmakers Jess Jacklin and Charles Beale felt like the film festival circuit wasn’t working for them, so they thought about what their perfect festival would look like — and then started it. They tell the story in the latest MovieMaker podcast, which you can enjoy on Apple or Spotify or here:

A Moviemaker in the Senate?: Jon Ossoff, who at the time of this writing appears very close to winning a Georgia Senate seat that would give Democrats control of Congress, was previously a documentary filmmaker. He executive produced the short “Living With Ebola,” episodes of the documentary Africa Investigates, and two documentaries featuring British journalist Stacey Dooley, 2016’s Stacey on the Frontline: Girls, Guns & Isis and the 2018 Stacey Dooley Investigates episode “Face to Face with Isis.” Here’s a Jon Ossoff tweet from 2017 when he was in production:

However: Ossoff apparently doesn’t like to be described as a filmmaker. On a recent episode of the New York Times podcast The Daily, we hear Times reporter Astead W. Herndon “shaking his head at his iPhone” because of a complaint from the Ossoff campaign about one of his stories. “The Ossoff people are mad,” Herndon explains, “because in the story we call him ‘a former filmmaker’ and they say he is a ‘former investigative journalist.’ It appears the Times is sticking to its guns: A piece on Sunday described Jon Ossoff as a “a white, 33-year-old documentary filmmaker from a prosperous Atlanta family.” Ossoff’s campaign biography calls him a “a Georgia native, media executive, investigative journalist, and small business owner.”

Jordan Peele on Quitting Acting: During a (quite successful, apparently) effort to Get Out the vote in Georgia, writer-director Jordan Peele explained to Bradley Whitford why he’s quit acting to focus on filmmaking. “I like watching my movies. I can watch the films I direct [but] watching me perform just feels like, it’s a bad kind of masturbatory. It’s masturbation you don’t enjoy,” he explained. “I feel like I got to do so much and it is a great feeling. When I think about those great moments when you’re basking in something you said that feels funny. When I think about all that, I think I got enough.”

A Great Comment of the Day: After we published this list of What Film Festivals Want, moviemaker Ned Cordery said he’d also like to see more transparency from festivals, especially about how they choose the films they program. Warren Etheredge, artistic director and co-founder of The Walla Walla Movie Crush — “an intoxicating blend of America’s finest short-form content,” stepped up in a big way. “I would happily answers those questions about our process,” Etheredge writes. “I can go into detail, but up front I can report a claim I doubt any other curator can make: I personally review every single short submitted and solicited for The Movie Crush. Consequently, I watch 2,000+ shorts every year. I like to watch them all to ensure programming integrity AND to be able to answer any moviemaker who might ask why her/his/their work does or does not get selected.”

Film Festivals Weren’t Meeting Their Needs. So They Started One
Jon Ossoff Plays Down ‘Filmmaker’ Career, Prefers to Be Called ‘Investigative Journalist’