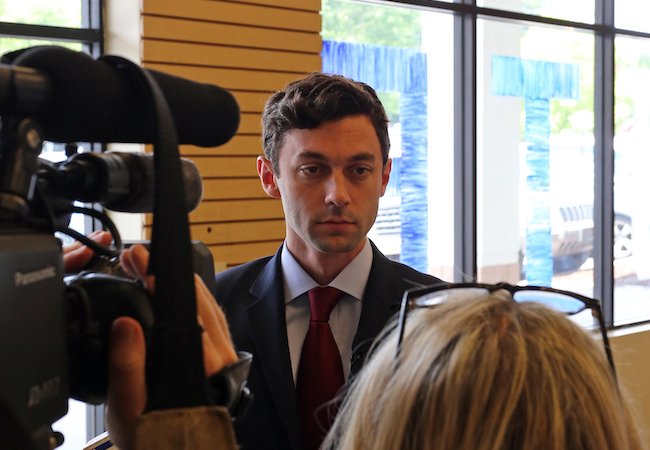 Jon Ossoff, whose election to the U.S. Senate in Georgia gave Democrats control of Congress, was previously a documentary filmmaker — but he would prefer that you refer to him as a former investigative journalist.

Ossoff, 33, worked on a series of films for television, focused mostly on Africa. He executive produced the short film “Living With Ebola,” episodes of the documentary Africa Investigates, and two documentaries featuring British journalist Stacey Dooley, 2016’s Stacey on the Frontline: Girls, Guns & Isis and the 2018 Stacey Dooley Investigates episode “Face to Face with Isis.”

Here’s a Jon Ossoff tweet from 2017 when he was in production:

But Ossoff would rather be described as an investigative journalist than a filmmaker.

On a recent episode of the New York Times podcast The Daily, we hear a description of Times reporter Astead W. Herndon “shaking his head at his iPhone” because of a complaint from the Ossoff campaign about one of his stories.

“The Ossoff people are mad,” Herndon explains, “because in the story we call him ‘a former filmmaker’ and they say he is a ‘former investigative journalist.’

Of course, one can be both: documentaries are a form of journalism.

The Times seems to be sticking to its guns. A piece on Sunday described Ossoff as a “documentary filmmaker from a prosperous Atlanta family.” Reuters is also among news outlets that refer to Ossoff as a filmmaker.

He didn’t always prefer the description “investigative journalist” to “filmmaker”: When his campaign announced he would take on Republican Sen. David Perdue last year, Ossoff’s campaign described him as “documentary filmmaker” in the first line of its announcement.

Perhaps his campaign decided journalists are more popular with voters than documentary filmmakers? That might seem counterintuitive in a state known for its rich tax credits for film productions, and hosting film shoots for much of the Marvel Cinematic Universe, among other high-profile projects.

A representative for Ossoff did not immediately respond to a request for comment Wednesday.

Is Jon Ossoff the first filmmaker in Congress? Not by a longshot. Al Franken wrote and executive produced the alcoholism drama When a Man Loves a Woman in 1994, more than a decade before he was elected to the Senate from his home state of Minnesota.

And while Fred Thompson of Tennessee never made a movie himself, he acted in several — including No Way Out, Die Hard II and The Hunt for Red October — before he was elected to the Senate in 1994. He continued his acting career after he was elected, most notably on Law & Order and its spinoffs.

Ossoff wouldn’t be the first journalist in the Senate, either: recent journalists-turned-senators include Paul Simon, the Illinois Democrat, and former Al Gore, who worked for The Tennessean newspaper in the early 1970s. Both were first elected to the Senate in 1984, and Gore went on to become the vice president and the 2000 Democratic presidential nominee. He also became a documentary filmmaker, collaborating on An Inconvenient Truth in 2006 and its sequel.

Here’s an excerpt from Stacey Dooley: Face to Face With ISIS.

Main image, above: Jon Ossoff, courtesy of Shutterstock. This post was updated after its initial publication with Ossoff winning his Senate seat.