Pub of the Dead: How Simon Pegg’s Favorite ‘Boozer’ Became Central to Shaun of the Dead (Exclusive Excerpt) 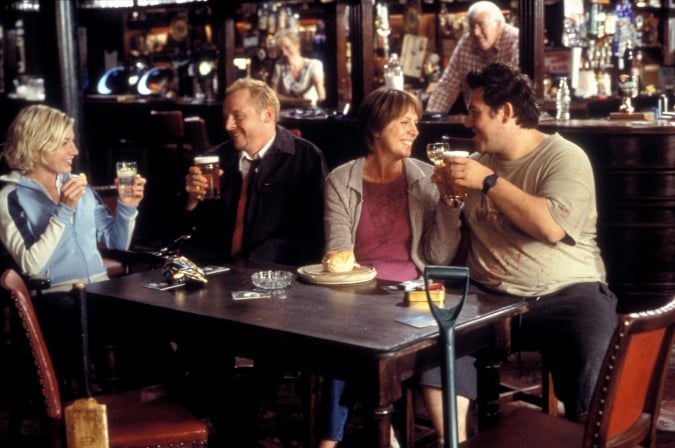 Edgar Wright and Simon Pegg were at complicated points in their lives when they started dreaming up 2004’s Shaun of the Dead, in which an unambitious Londoner named Shaun (Pegg), who spends his free time at the local pub, must suddenly grow up to face down a zombie apocalypse. His main objective: Get back to the safest place he knows, the pub. They co-wrote the bloody comedy, directed by Wright and starring Pegg and Nick Frost.

Wright had been disappointed by the response to his first film, 1995’s A Fistful of Fingers, released when he was barely in his twenties. But he earned success on television, especially working with Pegg and Frost, also in their twenties, on the ambitious British comedy series Spaced. When it ended, Wright turned down other TV offers to focus on getting back to moviemaking — at one point borrowing 500 pounds from Pegg to pay his rent. (Wright told MovieMaker that Pegg still hasn’t let him repay it: “ He wants to hold it over me forever.)”

In his witty and deeply researched book You’ve Got Red on You: How Shaun of the Dead Was Brought to Life, journalist and author Clark Collis describes how Pegg and Frost’s favorite hangout helped inspire the plot of the film. Wright, Pegg and Frost earned wide acclaim for Shaun, and went on to make two more films, Hot Fuzz and The World’s End, to complete the Three Flavors Cornetto trilogy. And Wright has made arguably his most daring film yet with Last Night in Soho, the focus of our cover story.

But for now, let’s go back to where it all began. —MM 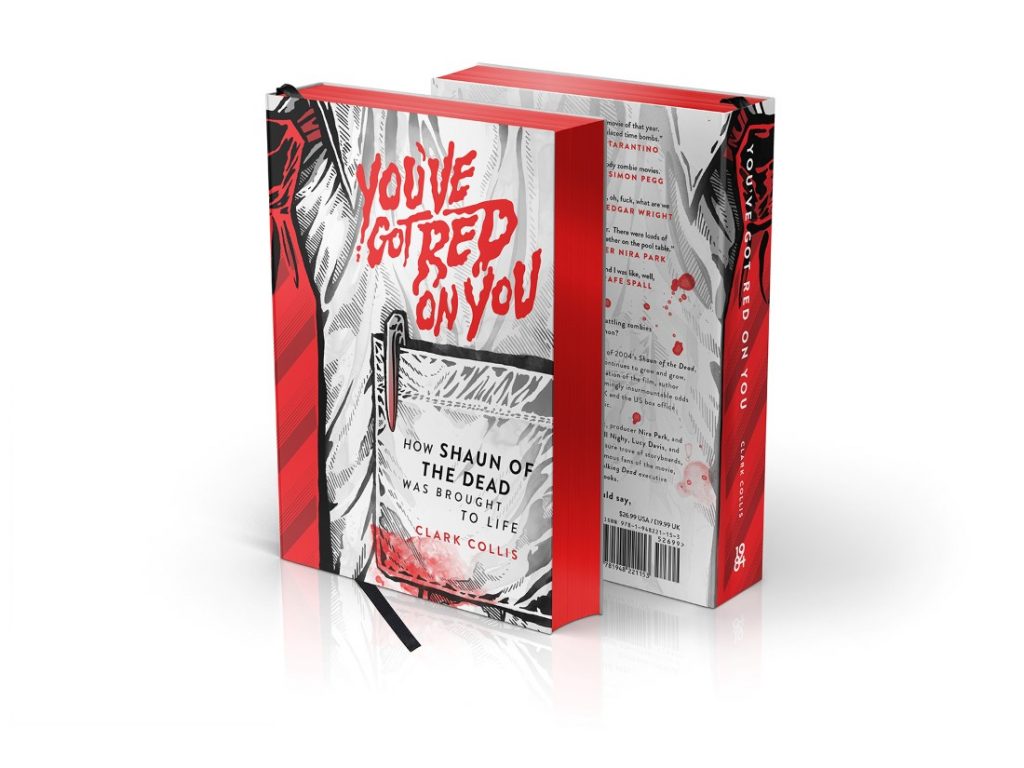 You’ve Got Red on You: How Shaun of the Dead Was Brought to Life by Clark Collis.

“It was on the corner of Shepherd’s Hill and Archway Road,” says Simon Pegg, “within two minutes’ walking distance of mine and Nick Frost’s house. It was a sticky-carpeted old man’s pub that had a really eclectic clientele. A lovely couple, John and Bernie, were the landlord and lady.”

When Pegg and Frost first started visiting The Shepherds, Frost would entertain his friend by dreaming up backstories and nicknames for the other drinkers. “We had all these different names for the regulars, until we actually got to know them,” says Pegg. “One was this elderly blonde lady who Nick said was an ex-stripper, and her stripper name was ‘Fried Gold.’” Frost and Pegg rapidly made The Shepherds their home away from home. “To say we were regulars would be an understatement,” says Pegg. “We just sort of lived there.”

Other entertainment industry notables were drawn to the pub. The Shepherds held a quiz on Thursday nights that Pegg and Frost started to attend, and Pegg began inviting his friends, including Spaced cast member Peter Serafinowicz and Coldplay singer Chris Martin. Pegg’s music publicist girlfriend Maureen McCann had introduced him to Martin, and the pair developed a firm and lasting friendship: the actor later became the godfather of Martin and his wife Gwyneth Paltrow’s child Apple, and the singer returned the favour after Pegg and McCann married and had their own daughter, Matilda. “Simon and I met at a concert Maureen was working at,” says Martin. “I’d seen Simon open for Steve Coogan before I knew him. I always felt this guy had something so magical. Simon’s like my brother. Any time we get together is great. I don’t drink, really, but I loved him enough to show up in a pub all the time.” 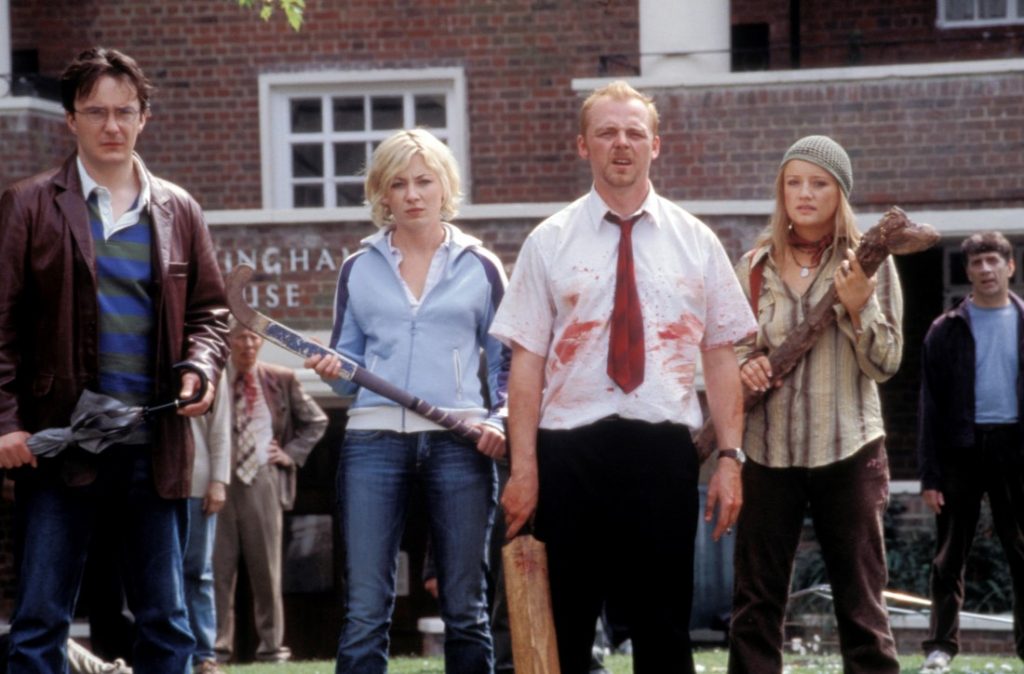 Shaun (Simon Pegg) leads a band of survivors in Shaun of the Dead, a film Clark Collis explores in You’ve Got Red on You. Photo courtesy of Focus Features

One Thursday, Martin brought along Dana Scully herself, Gillian Anderson – the remote object of Pegg and Frost’s affection when they had first lived together. “I met Simon there for the first time,” says Anderson. “It was fun. I felt a little bit like an interloper, because they’d all known each other for a very long time. I was just in town for a few days. I’m not sure I spoke that much to Simon that night. I found out later that because of a particular scene in Spaced they had done where his character had masturbated to Scully, he was worried I would be upset about it.” Frost was stunned to find himself in the actress’ company. “One day, she just came in and did the pub quiz,” he says. “It was fucking amazing. It must have been so uncomfortable for her, just to have me look at her for two hours. When she left, I ran out after her to say, ‘It was lovely to meet you.’ She wrote something on a bit of paper to me: ‘You’re a dickhead, but I love you.’”

Frost and Pegg spent much of their time at The Shepherds talking about how they would survive an undead apocalypse. The initial part of their plan involved securing the necessary means to slay the undead. “Obviously, you’d arm yourselves with long weapons,” says Frost. “Swords, big knives, machetes. If you can gaffer-tape a really long knife onto the end of a broom, then you’ve got yourself a great zombie weapon there. As everyone knows, a knife doesn’t run out of bullets. That said, there was a little gun shop in Archway called Pax Guns. We worked out that you could get onto the roofs on Archway Road and all the way down to the gun shop. Then we had some kind of weird fantasy that Pax had a secret cellar, and that’s where they kept all the illegal shit.”

The two men had a difference of opinion as to their ultimate destination. Frost wanted to head a couple of miles south-east to Arsenal football ground, where they could grow crops and farm livestock on the grass pitch. Pegg believed they should hide out somewhere local – somewhere like the very pub in which they were formulating their plan. “We thought we’d run down the rooftops, down Archway Road,” says Pegg. “We’d go to Pax Guns and then run back, get into The Shepherds, and lock all the doors.” 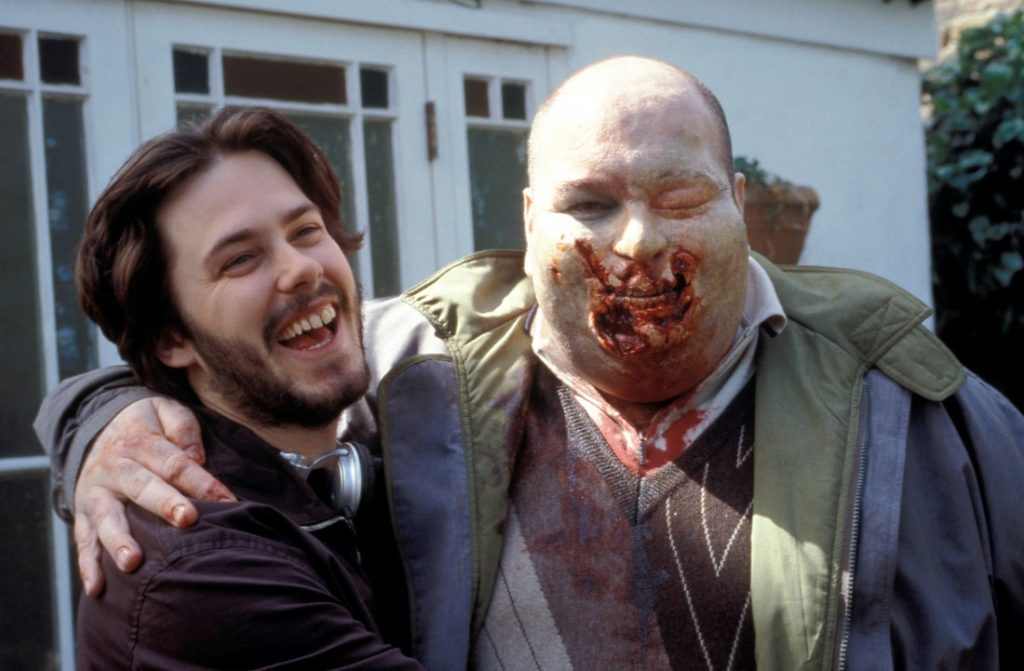 Shaun of the Dead director Edgar Wright and a zombie friend. Photo courtesy of Focus Features

Over time, Wright became irritated by his friends’ insistence on drinking at The Shepherds. “Edgar [Wright] wanted us to come into town, and go into Soho, and hang out at The Groucho Club and what-have-you,” says Pegg. “But we just didn’t want to.” The pair also refused to visit Wright in Islington, even though his home was just three miles away from where Pegg and Frost lived. “It would have to be something really special [for them] to come into town,” the director says. “They would never come and see me in Islington. Simon and Nick would never, ever leave The Shepherds. I’d always have to go there.” He remembers Frost and Pegg’s local with far less fondness than his two friends. “Simon waxes lyrical about that place, and so does Nick,” says Wright. “It was fine. It was just a boozer. It was funny, when it became The Boogaloo later on, and became a really hip pub through the patronage of The Libertines, there was a thing in Time Out talking about London’s coolest boozers. It mentioned The Boogaloo and said, ‘Formerly unloved boozer The Shepherds…’ Simon Pegg wrote a letter to Time Out to complain about their dismissal of The Shepherds, which was hilarious to me.”

Wright may have been aggrieved by the amount of time Pegg and Frost were spending in their local pub, but he agreed that Pegg’s apocalypse plan could provide the spine of their movie. “This became the plot of the film!” says a still-amazed Pegg. “Shaun and Ed can’t think beyond the realms of their local boozer. It became The Winchester because there had to be a gun over the bar.” “A lot of people think that The Winchester is the Winchester pub that used to be on Archway Road,” says Wright. “Not really. We may have taken the name from there, but I have never ever been in there. The Winchester was basically The Shepherds.”

In tribute, Wright and Pegg named the fictional pub’s landlord and landlady John and Bernie after their real-life counterparts.

The setting emphasised the idea that this was a British film whose characters were far removed from the centre of the action. The film would not open in a TV studio, like Dawn of the Dead, nor would it detail attempts to bring an end to the zombie apocalypse, as Day of the Dead had done. Essentially, Wright and Pegg set out to make a horror-comedy version of Tom Stoppard’s acclaimed 1966 tragicomedy Rosencrantz and Guildenstern Are Dead, which concerns two minor characters in Shakespeare’s Hamlet. “Shaun is not a member of the military, and he’s not a scientist who could cure the zombie crisis,” says Wright. “It’s not his job to save the day. He is just a man who has to get through to the end of the day.” 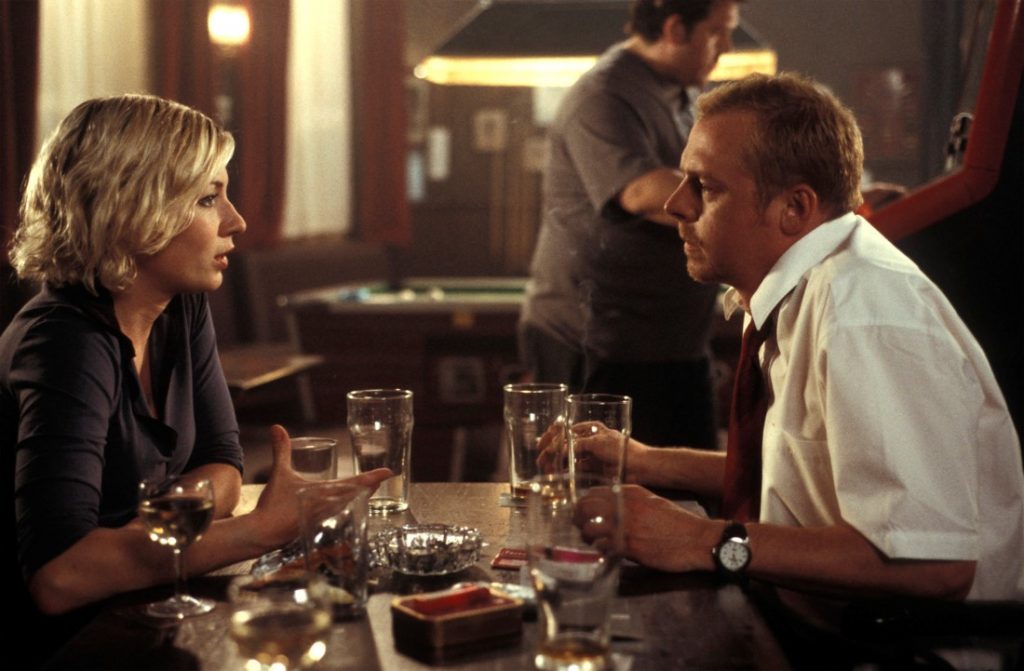 Shaun and Liz (Kate Ashfield) at the pub central to 2004’s Shaun of the Dead. Photo courtesy of Focus Features

In the finished film, the character who pleads with Shaun to spend less time at The Winchester is not an irritated male acquaintance attempting to lure him to Soho, but his girlfriend Liz, who merely wants to go for a nice dinner somewhere else. The character of Liz sprang from another facet of the script that Pegg and Wright hoped would make it unique. The screenwriters had come up with the idea of making not just a zombie comedy but a romantic zombie comedy – or ‘rom-zom-com’, as the pair would come to refer to this self-invented genre. Once again, the notion came from Wright and Pegg’s own lives. “Both me and Simon had been through break-ups,” says Wright. “Simon had had his first serious break-up, which is basically played out in Spaced. I had broken up with Karen [Beever] in between Spaced [seasons] one and two, though we were still friends and still worked together. For my part, Shaun of the Dead is my apology for being a complacent, useless boyfriend. I’d probably settled into a relationship too young, and got complacent, and wasn’t really trying as hard as I could. Shaun definitely has elements of ourselves in him.”

The pair took parodic aim at the UK-set romantic comedies written by Richard Curtis, such as the 1994 hit Four Weddings and a Funeral and 1999’s even more successful Notting Hill. “We didn’t ever really want to parody zombie movies,” says Pegg. “We wanted to make a zombie movie. What we wanted to parody was the Richard Curtis-style rom-com, where there’s a London love story going on. Richard Curtis, by the way, is a really lovely man, and this was in no way a detriment to him, but we pitched it as ‘Richard Curtis shot through the head.’”

Excerpted with permission from You’ve Got Red on You: How Shaun of the Dead Was Brought to Life, by Clark Collis. To be released on November 23, from 1984 Publishing.

Main image: The cast of Shaun of the Dead cheers at the pub. Photo courtesy of Focus Features.