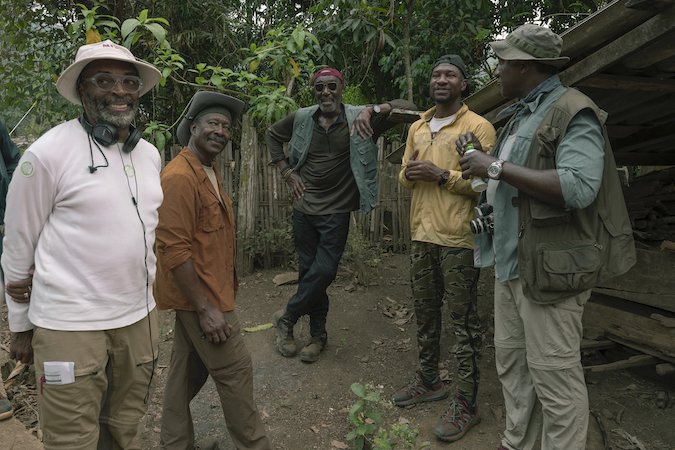 The new Spike Lee film Da 5 Bloods flashes back roughly half a century — but doesn’t de-age its four lead actors to do it. Lee says he didn’t rely on special effects or heavy makeup for a host of reasons — including that he trusts his audience.

In the film, veterans played by Norm Lewis (age 57), Isiah Whitlock Jr. (65) Delroy Lindo (67) and Clarke Peters (68) travel back to Vietnam in the modern era in search of buried gold and the remains of their beloved squad leader (Chadwick Boseman). In a series of flashbacks to the Vietnam War, they appear alongside Boseman’s character, Stormin’ Norman, in their current ages. They are Da 5 Bloods of the film’s title.

Speaking at an online Q&A Wednesday, the director said his Da 5 Bloods stars were able to convey the passage of time through acting alone. He said he also rejected the idea of using different actors to play the men in their youth.

“The guys we have are great actors,” he said. “And I think their performance would have been hindered by having some people play younger versions of them. And I’ve never really seen a film where that works.”

He added that when Netflix expressed interest in releasing the film, he didn’t want to muddy the deal by dramatically increasing its budget through CGI.

“Netflix was the… last place who said yes. We made this film for a price. If an additional $100 million had been added to the budget, the film would not have been made,” Lee said.

Lee said he didn’t want to use makeup or prosthetics either, for practical reasons. The film was shot on location in Vietnam.

“We were shooting in the jungle, a hundred degrees. Prosthetics, makeup — that stuff with melted and run off the actor’s face,” Lee said.

Ultimately, he said, he trusted the audience to see that the flashbacks occur from the perspective of the characters today.

“I believe in the intelligence of the audience. And I knew that it might be a little jarring the first time they see it. But I knew they would just go for the ride and understand this is their memory,” he said.

No one seems to be complaining about the decision no to de-age the four surviving 5 Bloods: Lindo especially has received excellent reviews for his performance as Paul, who ages from a young soldier in the war to a modern-day Trump supporter coping with PTSD.

You can listen to our Low Key podcast about Da 5 Bloods on Apple or Spotify or right here: