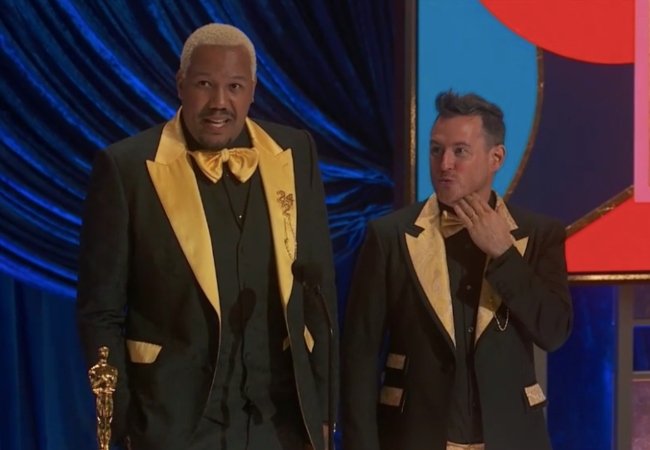 Travon Free and Martin Desmond Roe’s Two Distant Strangers took home the Oscar for Best Live-Action Short Film on Sunday, and Free used his half of the acceptance speech to ask viewers not to be indifferent to Black pain in the face of police brutality.

Then he invoked the words of American novelist and activist James Baldwin.

Free’s Dolce & Gabbana suit was lined with the names of those killed by police brutality, according to Page Six.

The Times quoted Free as saying at a film panel: “There’s no way to avoid the fact that the reality of being Black is often painful and often traumatic.”

The article also explored Amazon’s Them, which follows a Black family that moves to a hostile white neighborhood in the 1950s. Creator Little Marvin has acknowledged that Them includes upsetting images. But he said they are included to show the savagery of racism.

MovieMaker spoke with Free on our podcast back in January, during which he explained that he wanted the film to dramatize the way he felt watching one report after another of unarmed Black people being murdered.

“After the George Floyd murder happened… I just kept seeing the news stories of this cycle of violence that we experienced, and you see the list of names continue to grow,” he said. “I started thinking, what does it feel like? How can I make people feel what I feel, watching this cycle repeat itself over and over again? And how do we break it? And I don’t necessarily know the answer to that.”

He added: “When you feel like it can be you at any given moment, the repetition weighs on you. And so I tried to channel that into the film.”

When and Where Are the Oscars on? ABC at 5 PT/8 ET
Mank Breaks Irish Curse With Oscar Wins