Unmasked Oscars Overcome Awkwardness: To Hug or Not to Hug? (Not to Hug) 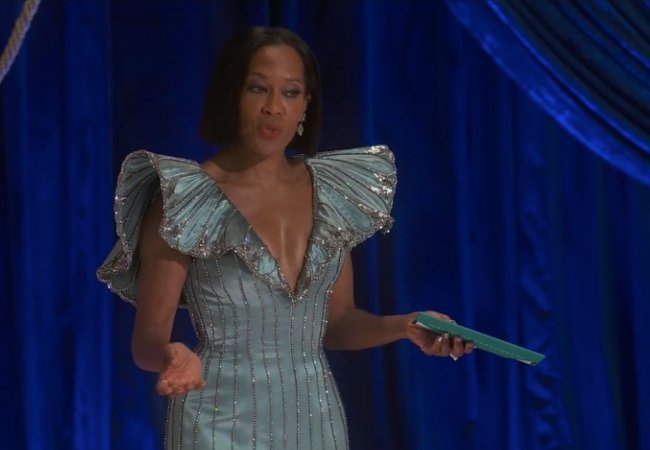 The Oscars opened with a dramatic sight Sunday for the millions of Americans who have spent the last year with their faces covered whenever they went out in public:

The ceremony started with the camera following Regina King into Los Angeles’ Union Station, where she took the stage with confidence to proclaim: “Yes, we are doing it maskless.”

“Think of this as a movie set. We been vaxxed, tested, re-tested and socially distanced, and we are following all of the rigorous protocols that got us back to work.”

King, who made her directorial debut last year with One Night in Miami, was referring to the pandemic protocols that allowed Hollywood productions to keep going even as other California industries were locked down — to the frustration of restaurants, gyms, and movie theaters.

“It has been quite a year and we are still smack dab in the middle of it,” King said.

She added, referring to the Derek Chauvin verdict: “If things had gone differently this past week in Minneapolis, I might have traded in my heels for marching boots.”

It was a bold start to a completely untraditional year in which half of the Best Picture nominees — Mank, Judas and the Black Messiah, The Trial of the Chicago 7 and Nomadland — premiered in the midst of the outbreak.

The ceremony came from producers Stacey Sher, Jesse Collins and Steven Soderbergh — a natural given that his film Contagion, released in 2011, has been constantly credited over the last year with foreshadowing the COVID-19 pandemic.

Variety reported earlier this week that the producers had decreed that Oscar attendees would not wear masks on-camera during the ceremony, but would wear them during commercial breaks. King explained as much to the attendees, who also had to undergo temperature checks and three COVID-19 tests prior to the ceremony.

Attendance at Union Station, which is a train station normally, was limited to 170 people. The seating arrangments required people to occasionally crane their necks to watch each other’s introductions and speeches, but everyone seemed to take it in stride.

The energy during the pre-show interviews felt electric with equal parts excitement and awkwardness, but in the most endearing way. As stars rotated through six-foot social-distanced unmasked interviews with pre-show hosts Ariana DeBose and Lil Rel Howery, all parties seemed to be bursting with nervous jitters.

Howery and Sound of Metal star and nominee Riz Ahmed had a laugh over that slightly uncomfortable first moment during which they questioned whether or not they should hug or not. (They didn’t).

But Howery remarked that it was a common feeling during the night — this year, there’s no room for hand shakes or even elbow-touches.

But there was room for smiles.

The most awkward moment of the night — and one of the funniest — came when Daniel Kaluuya received his award for Best Supporting Actor for Judas and the Black Messiah. He earnestly thanked many people, including co-star LaKeith Stanfield and the man he played, Fred Hampton, before acknowledging his mother, who was sitting nearby with his sister.

Based on his mother’s facial expression, she will never win any awards for a poker face.

Margeaux Sippell contributed to this story.

Why Daniel Kaluuya and LaKeith Stanfield Were Both Up for Best Supporting Actor in Judas and the Black Messiah
Travon Free Says in Two Distant Strangers Oscars Speech: ‘Don’t Be Indifferent to Our Pain’