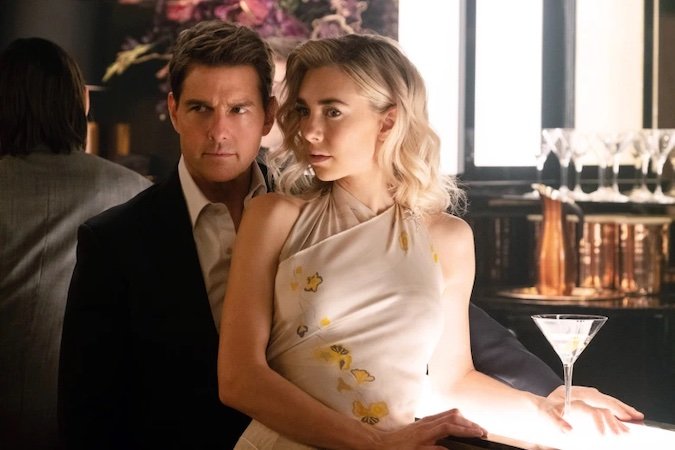 Mission: Impossible 7 is delayed despite the best efforts of Tom Cruise; Neill Blomkamp is back with a mix of sci-fi and demons; we talk with Patrick Wilson about his fears; Tiffany Haddish will play one of her idols. Also: A Pittsburgh theater sets out to disrupt film distribution in a way that could help indie theaters and moviemakers. All in today’s Movie News Rundown.

Should’ve Listened: Filming on Mission: Impossible 7 is shut down for two weeks in the U.K. after at least one person on the production tested positive for coronavirus, says The Hollywood Reporter, which notes that this comes six months after Tom Cruise chewed out crew members he accused of violating COVID-10 safety guidelines.

Row House Films: A small Pittsburgh indie theater, Row House Cinema, has realized something that could shake up the way films get bought, sold and watched — theaters now have the technology to release films themselves without big distributors getting involved. Will it work? It’s up to you. The first big test is the new film Monuments, and I wrote a lot about this whole situation.

What Is Monuments? It’s an idiosyncratic semi-comedy about a man carrying his wife’s ashes that is getting great reviews.

More Conjuring: Ryan Coleman has this lovely profile of Patrick Wilson, who returns today in The Conjuring: The Devil Made Me Do It, and seems to be deliberately seeking out jobs that scare him.

Demonic: While we’re on the subject, Neill Blomkamp returns with his first film since 2015’s Chappie. Demonic combines horror and sci-fi in very intriguing ways and I won’t say anything else except that fans of Blomkamp (and Ben Wheatley) will want to subscribe to MovieMaker before our next print issue comes out. Anyway, here is the Demonic trailer:

Tiffany Haddish as Flo-Jo: The very busy Haddish will play Florence Griffith Joyner, one of her childhood heroes, Variety reports. The Olympic track and field star died of an epileptic seizure in 1998 at the age of 38 after setting records that remain unbroken.

Did Anyone See Haddish in Bad Trip? It’s a very funny anti-Borat where she and Eric André and Lil Rel Howery interact with real people, but instead of revealing themselves to be terrible, the real people reaffirm your hope in humanity.

How Do We Not Talk About This More? MovieMaker podcast co-host Eric Steuer made a shocking discovery while watching Six Days, Seven Nights, with Harrison Ford and Temuera Morrison.

Now This is a Comment of the Day: Jeffrey Anderson weighs in on the ongoing discussion about directors’ last films and whether Stanley Kubrick’s Eyes Wide Shut is a success: “I think Eyes Wide Shut is a masterpiece, and one of Kubrick’s best. Kubrick’s movies (especially the later ones) have almost always under-appreciated in their time, and then embraced years later. Eyes Wide Shut is beginning to be appreciated, at last. I think there are plenty of great Final Films out there, including Ford’s 7 Women, Bergman’s Saraband, Kurosawa’s Madadayo, Hitchcock’s Family Plot, Dreyer’s Gertrud, Leone’s Once Upon a Time in America, Bunuel’s That Obscure Object of Desire, Huston’s The Dead, Yang’s Yi Yi, Ozu’s An Autumn Afternoon, Kieslowski’s Three Colors, etc.”

Have a Great Weekend: Everybody!