With Monuments, an Indie Theater Tries to Disrupt Traditional Distribution

Monuments, the new movie from Chicago-based filmmaker Jack C. Newell, is a truly independent film that has has earned festival acclaim and warm critical reviews for its off-kilter approach to tough subject matter. It’s also exactly the kind of movie that no longer has any guarantee of a theatrical release.

In traditional film distribution, a distributor handles all marketing of a film, deciding if it will be released in theaters or online, and how. The biggest is Disney, and smaller ones include the well-respected IFC. Very generally speaking, the distributor promotes the film, and takes a cut of the box office receipts from theaters. When it works, it really works. But filmmakers sometimes complain that distributors tend to prefer films that fall into easily marketable genres, like superheroes or horror, because such films are easier to sell to mass audiences.

Untethered by pandemic disruption and inspired by a successful cat film festival, one independent theater is trying to disrupt the existing distribution system — starting with Monuments.

Row House Cinema, based in Pittsburgh, has branched out into film releasing to help other small independent theaters offer up thoughtful, small-scale, hard-to-pigeonhole indie films. Monuments is the first film that the theater’s new distribution arm, Row House Films, plans to release in the coming months. It is out today.

This is, as you’ve probably noticed, a strange time for movie theaters. Many are just reopening or just regaining their audiences. Rich Daughtridge, CEO of Warehouse Cinemas in Frederick, Maryland, notes that this past weekend brought a “total sense of relief” because not only did A Quiet Place Part II pull in $57 million, but Cruella pulled in respectable numbers as well — “a one-two punch as far as the box office.” He’s on the board and is the chair of the marketing committee for the Independent Cinema Alliance, which represents about 300 members with 5,500 screens in 800 locations.

Even theaters that were able to stay open during the pandemic struggled to draw customers, he notes, because few big films came out, and big film distribution companies understandably weren’t spending as much to market their occasional theatrical releases. That left many theaters looking for ways to innovate, better promote themselves, and find new sources of revenue at a time when nothing was guaranteed. The federal government allocated $15 billion in December for indie theaters, live venues, and other cultural institutions, but not all theaters qualified.

Row House sees an opportunity in Monuments, a film that might have had trouble finding a niche even before COVID-19 exacerbated every challenge to the entire industry.

“A movie like Monuments, no studio or whatever is gonna make. It’s too idiosyncratic. It’s not a comedy or a drama and it’s not a horror film. It’s an American independent film,” explains Newell.

The film follows a professor (David Sullivan) who is so devastated by the sudden death of his wife Laura (Marguerite Moreau) that he refuses to part with her ashes, and continues to speak with a manifestation of her. He wrote it with Rebecca Fons, his wife, based on a story by her mother, Marianne Fons. The Chicago Sun-Times’ Richard Roeper called it a “wonderfully weird and decidedly offbeat gem.”

Brian Mendelssohn, who founded Row House Cinema in 2014, likens Monuments to Little Miss Sunshine (2006) or Garden State (2004), both of which are, a little unbelievably, more than 15 years old. But Monuments might have even more in common with the indies that preceded those films, Mendelssohn says.

“It’s a movie that would have come out 30 years ago,” Mendelssohn tells MovieMaker. “It’s an adventure comedy with a romantic twinge. It doesn’t have a straight genre, per se, but it definitely falls in that gap of the kind of movie that’s not really being made anymore. … The only person who could make it is Jack.”

Or as Newell explains it: “The way I try to make films, being in Chicago, not in L.A. or New York where all the ‘industry’ is, you do just have to make it.”

Blockbusters chased many smaller films out of multiplexes years if not decades before COVID-19 shut down theaters across the country. While indie films may have thrived in 1990s arthouse theaters (even if it didn’t feel like it at the time), some of the greatest indie filmmakers of the era have been lured to blockbusters, prestige cable or streaming television.

Newell has gone the Netflix route before: His last film, the 2017 documentary 42 Grams, streamed on the platform. But when it came time to finance Monuments, he and producer Angie Gaffney went out in search of their own funding.

“People just wait for someone to come by and say, ‘I’m buying your movie,’ magic-wand style. And in their conception, not only is someone going to give them all the money, there’s also no strings attached, and you don’t have to have any believable plan to return investment,” Newell says.

“I’m not a rich person, and neither is Angie,” he adds. “A movie like this, you can’t really go to a bank and say, ‘Hey, give us a loan for this amount of money.'” 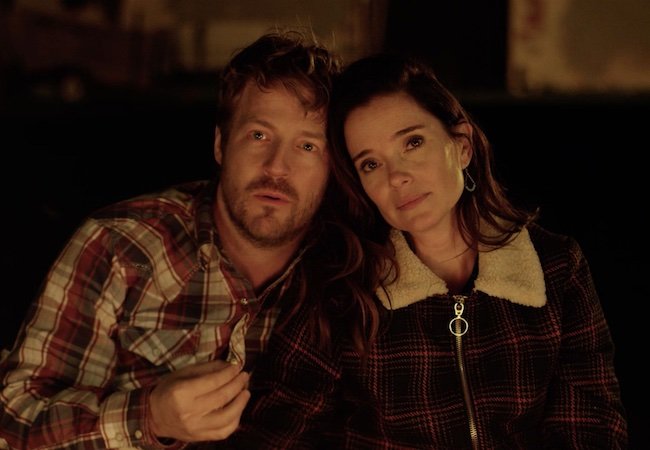 So where did they find investors? They approached anyone and everyone they knew with the slightest interest in film.

“You start with one and they’ll be like, ‘Yeah, we’re not really interested,’ and have myriad of reasons why they wouldn’t invest,” Newell says. “And then you say, ‘That’s great. Do you know anyone else?’ You keep going and you keep refining the pitch. … It’s just this shot-on-goals sort of approach.”

“The executive producers on the film, and EP Ed Toolis specifically, genuinely liked the script, wanted to be part of it creatively in their way, were incredibly deferential to us, the artists, in being able to make the film we wanted to make, and were incredibly supportive throughout the process. It was sort of a dream in a lot of ways,” Newell says.

He shot the film in 2018, finished it in 2019, and hit the festival circuit. It won the coveted Audience Award for a U.S. Independent Feature at the Nashville Film Festival, and was headed next to the Heartland International Film Festival. That’s when it caught the attention of Mendelssohn, who knew Newell’s wife, Rebecca Fons, through her film work — she was the director of programming at FilmScene in Iowa City, and is now the director of programming at the Gene Siskel Film Center of the School of the Art Institute of Chicago.

Mendelssohn worked in real estate before he opened the Row House, and jokes that he used to judge neighborhoods by the quality of their movie theaters. His area in the Lawrenceville section of Pittsburgh didn’t have one, so he bought a building at a low price and got to work. Row House debuted with a screening of Pulp Fiction in 2014, and did well with screenings of older and foreign films. Mendelssohn says he was put off from most new releases by the fact that distributors expected more than half of the earnings for American films.

He started to think more about his business model during the pandemic, when he had to close the theater’s doors and lay off the staff. Struggling to raise money, Row House organized the Quarantine Cat Film Fest, made up of cat videos sent in by their owners. The fest was held online, with Row House and about 125 other indie theaters selling tickets. Fans who wanted to see the cat videos — while supporting their local theaters — paid more than $80,000, which helped many struggling cinemas pay their rent, Mendelssohn says.

“We got like three months of rent out of it,” he says.

Row House used Vimeo’s OTT platform to share the cat videos with theaters, but Mendelssohn realized he could be even more ambitious with the technology. Row House will use the platform to share Monuments with six theaters that are showing the film in-person (Cleveland Cinemas, Laemmle’s Monica Film Center in Los Angeles, Rodeo Cinema in Oklahoma City, the Summerfield Cinemas in Santa Rosa, California, the Iowa Theater in Winterset, Iowa, and the Tull Family Theater in Sewickley, just outside Pittsburgh. It is also available virtually through 18 independent cinemas across the country.

Row House isn’t the first theater in recent years to spin off into distribution: the Alamo Drafthouse Cinema Chain launched Drafthouse Films a decade ago. But Mendelssohn hopes Row House can offer a way forward for theaters that don’t want to rely on older films, invest in expensive blockbusters, or even rely on the in-person theatrical experience to survive. The last year has proven that being able to keep the doors open isn’t a given.

His hope is to eliminate overhead costs for everyone. For one thing, Row House will only ask theaters for 35 percent of the earnings for Monuments and other films it releases, at least initially. It will also give filmmakers a split of the profits, instead of paying for films up front. And it will eschew posters, among other expenses, in favor of online promotion.

What it offers filmmakers in return is the chance to get their movies on big screens, in front of audiences. And it offers indie theaters fresh, indie stories, and an alternative to traditional distributors.

“I’m sure they’re still going to have to talk to distributors and do that game,” says Newell. “But now at least they have one film a cycle or four films a year to be like, ‘This one’s ours. We chose this. We think it’s good.'”

Monuments is now available in virtual cinemas and at select theaters listed above, from Row House Films.

The Conjuring and Insidious Star Patrick Wilson Is At His Best When He’s A Little Scared
Tom Cruise Was Right; Neill Blomkamp Is Back; Patrick Wilson’s Fears; Rethinking Distribution