Theaters to Get Billions in Federal Stimulus Package 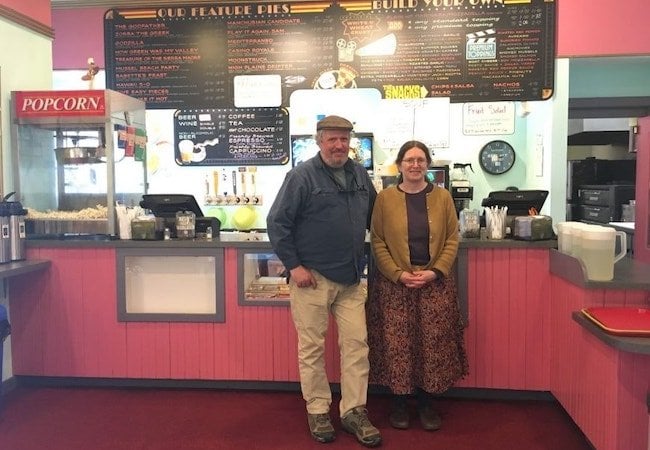 The $900 billion stimulus deal reached in Congress on Sunday includes roughly $15 billion in aid for struggling movie theaters, live venues and other cultural institutions — a lifeline for businesses shut down for months by COVID-19.

“More help is on the way,” Senate Majority Leader Mitch McConnell said as he announced the deal on the Senate floor.

Final votes on the spending package were expected on Monday, and then it will go to President Trump for his signature, The New York Times reported.

The benefits could be make-or-break for small businesses like one we profiled last week, the Reel Pizza Cinerama in Bar Harbor, Maine. Husband-and-wife owners Chris Vincenty and Lisa Burton (above) had to lay off all 14 of their employees on March 15 because of COVID-19. Even worse, it was the 25th anniversary of their business.

The fate of “Save Our Stages” — and the rest of the $900 billion deal — had been in question as recently as Friday, as Democrats and Republicans struggled to find an agreement. Republican Sen. John Thune of South Dakota said “Save Our Stages” in particular was “in play.”

The version of the package that was under consideration last week would split the roughly $15 billion between 1,500 live-theater companies and about 3,500 movie theaters, according to estimates by the trade group the National Association of Theatre Owners.

NATO notes that the proposal initially covered only live venues, and would have included $10 billion. When movie theaters were added, it went up to $15 billion. The stimulus money would cover costs like payroll, rent, utilities, and personal protective equipment.

It’s unclear how the money would be divided, so take the following with a grain of salt. But if you assume the added $5 billion would go exclusively to movie theaters, that would average out to about $1.4 million for each.

The stimulus deal is not expected to benefit larger chains, such as the country’s largest, AMC. It said in October that it could run out of cash by early next year — which is now weeks away. The company’s stock plunged last week after it announced a plan to sell shares to raise money.

Warner Bros. added to large chains’ woes when it announced that it would release all 17 of the films it plans for 2021 to HBO Max at the same time they are released in theaters, giving theatergoers less incentive to return to multiplexes when they consider it safe to do so.