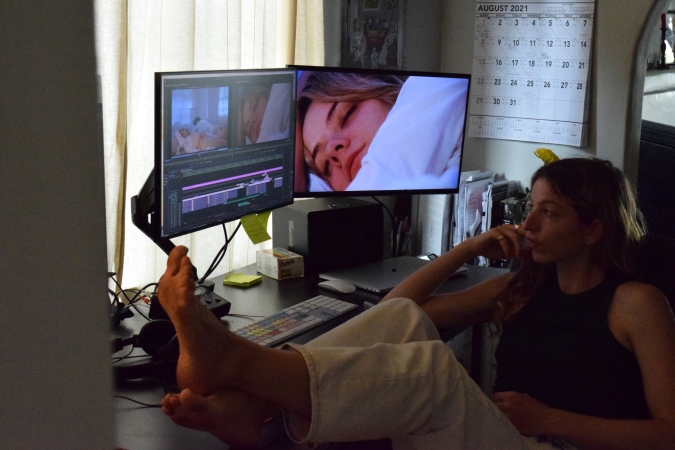 Sophie Corra is the editor of The Scary of Sixty-First, the feature directorial debut from Dasha Nekrasova. In this feature, Corra discusses how the fast nature of the shoot influenced the edit and how to break contemporary cinema out of its overly-cautiously rut.

I had dinner with my favorite director, Whit Stillman, a few months ago at Swingers in West Hollywood. After a momentary scare in 2020 that Swingers would be shutting its doors for good, we were relieved to hear that a new owner had stepped in to keep the lights on. Whit was especially relieved, because he steadfastly insists this is where all his dinners take place when he’s in town. Our conversation started as it usually does: “Why can’t we get the big booth? They said it’s saved. For who? Nobody ever sits there.”

Then we talked about future projects, classic Brooks Brothers, current projects, and, of course, movies. This movie conversation regarded pre-code cinema of the early ’30s. Whit’s point was that people often claim to love this era because the films were naughtier, nastier, and more inclined to reflect the actual concerns of society, but that’s only half the story.

These films are superior to the neutered cinema that followed in the ’40s because in them, the language of cinematic storytelling was being born. Filmmakers had no structural tropes to fall back on besides Homer and Shakespeare. There was no “Save the Cat,” no canonized three-act structure, no hard rules.

In an age when reboots, sequels and Marvel rule, and their indie counterparts feel small and unchallenging, it seems many people have given up on contemporary movies, resorting to the safety of the Criterion Channel.

As an editor and movie lover I find this very sad, though I am hopeful cinema is about to turn a corner. As Quentin Tarantino frequently observes in interviews, the hyper-conservative films of the ’80s led directly to the experimental indies boom in the ’90s. Perhaps a new wave of cinema needs to be born from filmmakers willing to be naughty and nasty. Perhaps they, too, need to figure out how to tell a visual story.

The Scary of Sixty-First is Dasha Nekrasova’s first feature, which she made quickly and cheaply. A true artist and defender of the avantgarde, she used inexperience and lack of resources to her advantage. Born from this was a film uninterested in the unwritten rules of “good taste”: something provocative and honest and — hopefully — a small spark that ignites a cinematic rebirth. 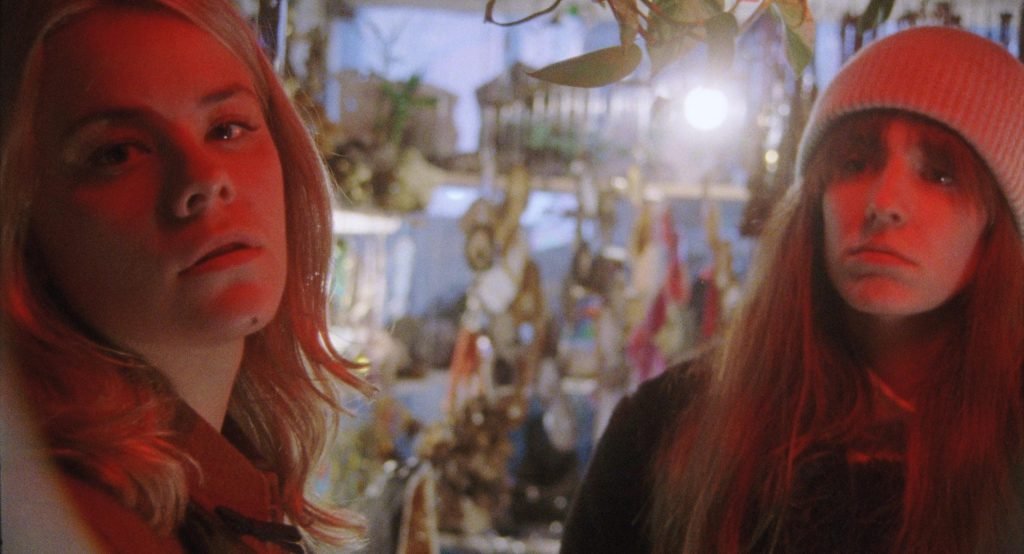 Dasha and I became friends about eight years ago in Los Angeles. When we met she was a struggling actress waiting tables at a French bistro in Highland Park, and the only Angeleno I knew who took the bus everywhere. She was different, and it was obvious. Incredibly intelligent and witty, a fearless hustler, a sweetheart nihilist. Her subsequent success, built entirely from sheer will, came as no surprise. When I heard she was making a film I was of course interested in cutting it.

Due to the pandemic, my schedule was suddenly cleared — as Dasha would say, “It’s God’s plan” — and I jumped at the opportunity.

Shooting was already completed when I was hired. They even had an extremely rough assembly of the film, which I only watched 10 minutes of before I turned it off. As an editor I hate seeing other people’s edits of the material before I take a stab at it. I know some editors let their assistants assemble scenes and then begin their cut after that, but I simply can’t. It’s amazing what ideas will stay stuck once you’ve seen them. They find a way of seeping into your choices, and a better version becomes harder to discover. I watch every inch of footage, and cut everything from scratch myself.

I started cutting Scary in Los Angeles in June. Dasha, who’s since relocated to New York City, planned to join me in the edit in July, so per usual I was on my own for the editor’s cut. As I started watching dailies, I saw that it had big, weird potential. It was beautifully shot by Hunter Zimny, and the dialogue, co-written by Dasha and Madeline Quinn (who also co-stars), was subversive and hilarious. Betsey Brown played the most shocking scenes with total commitment. There was a level of risk that felt new and exciting. Coverage was minimal due to the low budget, shooting on 16mm, and time constraints, so Dasha emphasized tone. Taking my cue from that, I decided to edit with a similar freedom, breaking the basic rules of editing (often out of necessity) and instead prioritizing the mental chaos Dasha was trying to communicate.

After a few days of screening dailies and assembling scenes, I gave Dasha a call. I asked, “Can I try some crazy stuff?” She didn’t pause. “Absolutely.” This was freeing for me, after a year spent on studio TV projects.

The film is about two women who move into a former home of Jeffrey Epstein. So I asked Dasha to send me all her favorite Epstein stills and videos from the internet. If you’ve seen the film, you can probably guess Dasha is an Epstein truther in real life, and has a deep well of knowledge on the subject. When scouring Getty Images for potential videos of Epstein, I even found a clip of Dasha and one of Epstein’s victims outside a courthouse. Getty had mislabeled the clip, listing Dasha as the victim. It was clear the film was more than a novel concept. It was something Dasha had lived.

The Scary of Sixty-First is a dirty, messy, perverted film about wealth’s moral rot and the spiral some people fall down when they stare into the abyss of this revelation. Every generation gets hit with a different dose of reality, and Dasha thinks Epstein, and the powerful people who protected him, are what’s been handed to us. I tried to reflect this new consciousness in my editing choices. I started intercutting scenes, using a haunting red flash of the Hudson River from the dailies as an overlay, to help with transitions. 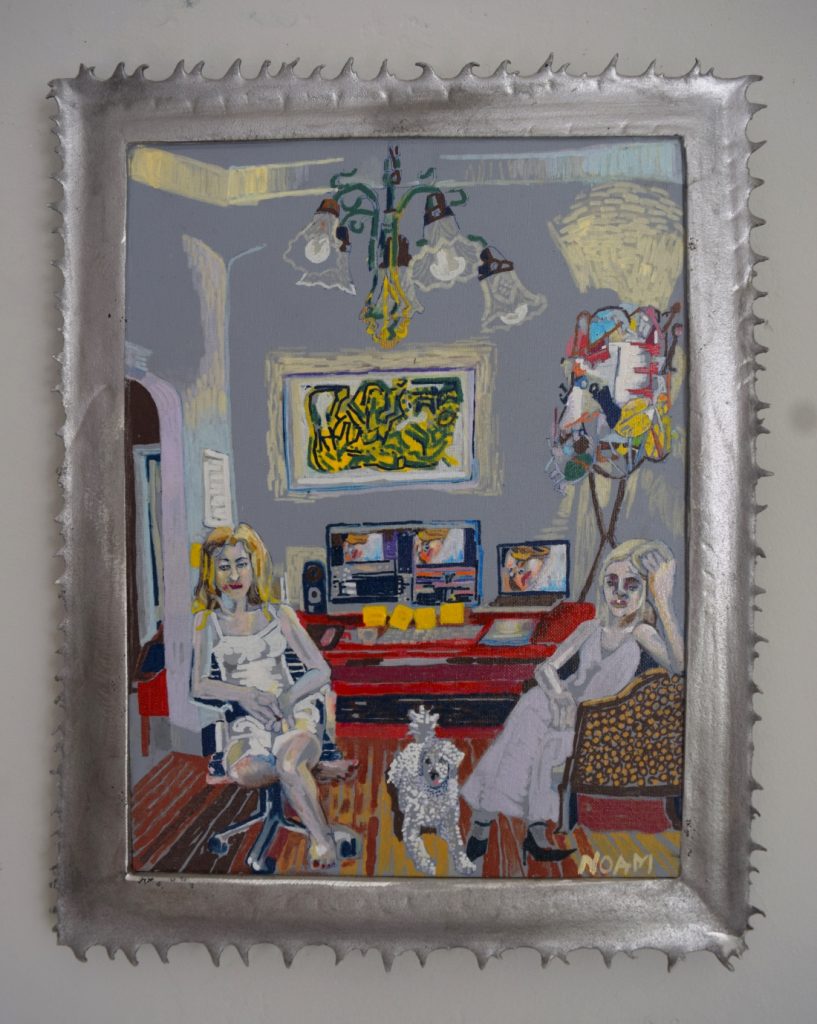 Capturing demonic energy demands some invention. In an attempt to convey the feeling of an amphetamine-driven obsession, I added flashes of the images Dasha sent me to key places in the film. The whole movie was becoming a tweaked-out nightmare, so why not add an unscripted dream sequence?

In July, Dasha flew to L.A. so we could continue to work together. This was at the height of COVID, so my boyfriend (now husband) Andy rolled a mattress out on the floor of his home office/studio, and Dasha crashed there for three weeks while we edited downstairs. When I first met Dasha, years ago, she had been sleeping on a mattress on the floor, so things were coming full circle.

Each morning I’d get up early to work on the cut for a few hours. Then Dasha would come down around 11 a.m., having spent the morning reading, writing, podcasting or sleeping, and we’d work together starting around noon, until dinner. We’d have dinner together and then watch a movie, often films one or both of us had already seen but wanted to rewatch as inspiration. Horror was the main programming: Rosemary’s Baby, Sisters, The Tenant, some Giallo classics like Deep Red and Opera, and a few Japanese films like Pulse and Black Cat. One night we watched Paul Schrader’s Hardcore, which turned out to be very influential for music. Robert Altman’s Three Women helped us immensely with the shape of the dream sequence. We both agreed Wes Craven’s Last House on the Left was far more amateurish than we remembered, but its appeal lay in its sickening brutality.

My first assembly was just the beginning. We’d sit together every day and she’d react to what I did — liking one idea but wanting to push it further, or maybe I’d gone too far and it needed focus, or we’d scrap an idea completely and that would spur another. In the dream sequence, I originally incorporated an overlay of Prince Andrew’s wedding. We concluded that it didn’t really make sense, but there was something to the idea. So together we found all the important images to use, both conceptually and aesthetically, until it felt “correct.” Like me, she edits from her gut.

Also read: Dasha Nekrasova Channels Conspiracy Fascination and Knack for Provocation Into The Scary of Sixty-First

Even though this was Dasha’s first time in an “edit room,” she had strong taste, knew what she liked, and knew the core thesis from which to build everything. Having a real sensibility and staying true to it is more important than understanding the rules of the craft. I could help her with that. Dasha has vision and great instincts. To truly love and study film is another prerequisite. This all coalesced into the final film, which is a reason Scary won Best First Feature at the Berlin International Film Festival.

We’re living in a time where most movies operate under a new, self-imposed code. Artists seem increasingly afraid to depict nonconformist thought or be offensive. I’m not going to postulate why, but it’s clear an edge has been smoothed out into a curve. Films have become duller, less about the way humanity is and more about what we desire it to be, and when our desires overrule truth, we exist in the realm of propaganda. Following this code is the death of art. Scary may be more stylized and outrageous than many contemporary films, but it expresses the twisted truth about our society and the lack of trust we have in what we’re being told. Dasha’s rebellious voice as a filmmaker and artist gives me hope for the post-code future.

The Scary of Sixty-First, directed by Dasha Nekrasova and edited by Sophie Corra, opens in theaters on Friday.