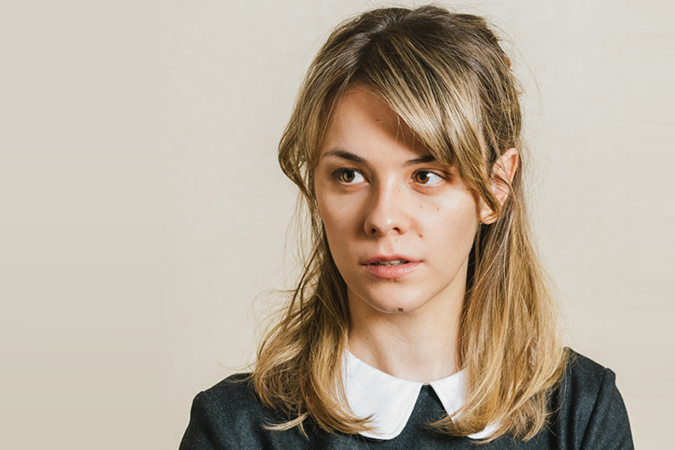 When Jeffrey Epstein died on the morning of August 10, 2019, Dasha Nekrasova visited the sites he left behind: Manhattan’s Metropolitan Correctional Center, where he died waiting to stand trial on sex trafficking charges; the medical examiner’s office, where she hoped to catch a glimpse of his body being unloaded; and his 71st Street townhouse, where she posed for impromptu photographs in an Eyes Wide Shut T-shirt.

She has watched the Stanley Kubrick film, in which Tom Cruise wanders New York in search of secrets, countless times.

“Maybe like most people I thought it was this marital drama,” she says. “And I think on repeat viewings, it becomes clear that it’s really about this power structure and the location of an individual within it.”

One of her Eyes Wide Shut viewings was on acid, as she co-wrote her feature directorial debut The Scary of Sixty-First, a horror movie about two women who unknowingly move into an apartment previously owned by Epstein. It opens this Friday in Los Angeles, as Epstein’s aide-de-camp, Ghislaine Maxwell, stands trial for sex trafficking, and as Nekrasova’s role on HBO’s Succession, as beleaguered PR maven Comfry, expands.

The Scary of Sixty-First may seem like the latest provocation from Nekrasova, whose comical, often acerbic podcast with co-host Anna Khachiyan, Red Scare, has galvanized a growing fan base while critiquing everything from Dunkin’ Donuts’ avocado toast to the #MeToo movement.

As children of the former Soviet Union, Nekrasova and Khachiyan have a sensibility that may be baffling to some native-born Americans. 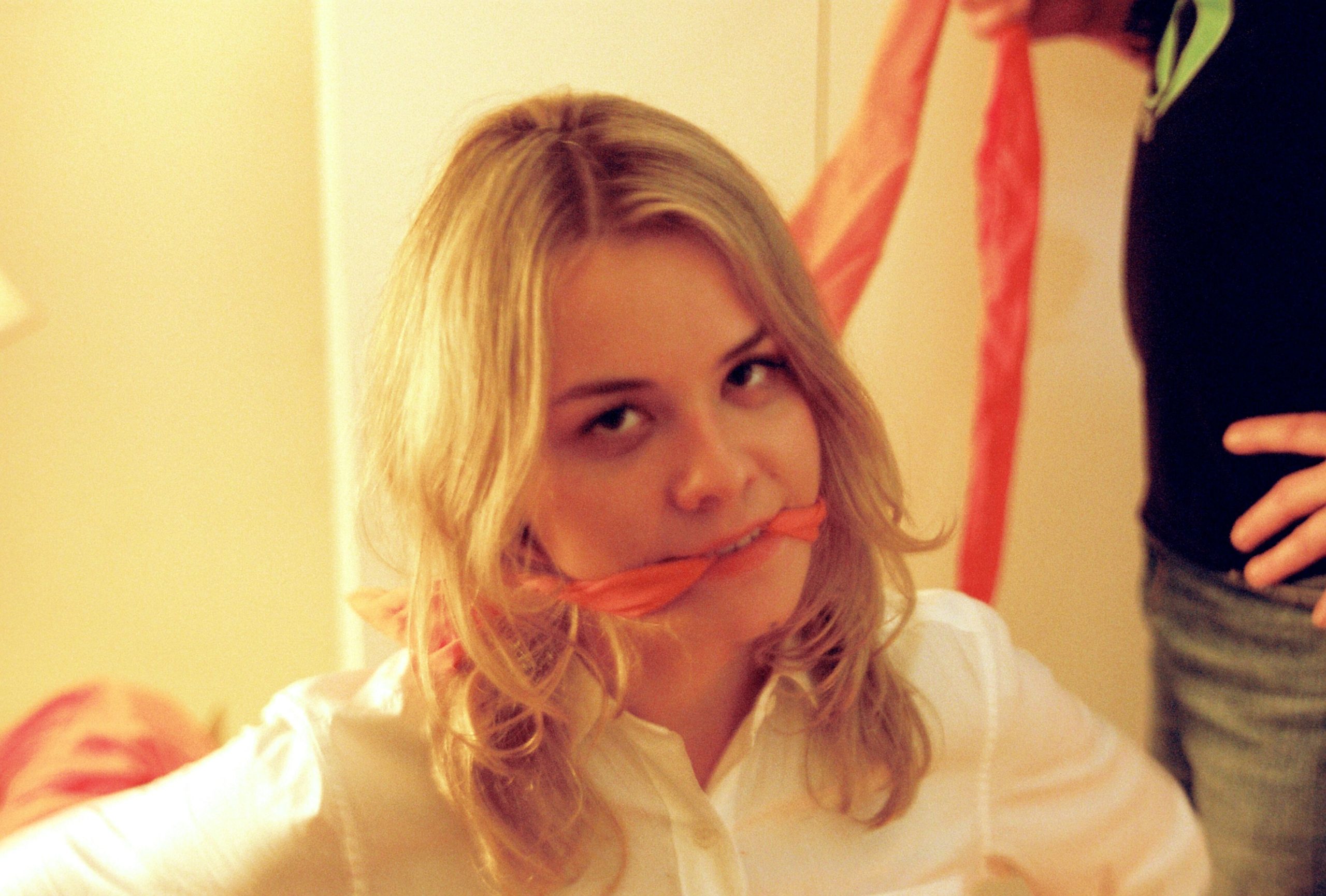 Dasha Nekrasova prepares to test out Epstein’s death by hanging in The Scary of Sixty-First. Photo by Louis Miller

“There’s an aggressively intelligent humor and a knowing sadness within Dasha. Some call it nihilism, but when you watch her embody a character, it feels more like humanism,” says Spree moviemaker Eugene Kotlyarenko, who directed Nekrasova in 2020’s We Are and 2018’s Wobble Palace, which she co-wrote. “In a cultural moment where people feel the need to police each other towards a homogenized corporate prudishness, I find her interest in the abject refreshing, and her rebellious sensibility necessary.”

But Nekrasova has a personal connection to the Epstein story that goes beyond the deliberate provocations and conspiracy theories surrounding Epstein’s death that make up a large part of The Scary of Sixty-First.

In August, she helped a friend, a Jane Doe in the Epstein case, write a statement about how Epstein didn’t act alone, but instead within a system that enabled him to move through the world freely. Nekrasova attended the courtroom reading of this statement, along with 22 other Epstein victims’ statements, 17 days after his death.

“Wealth itself has this moral rot to it. It seems like pedophilia is really a symptom of the decadence of the ruling class or the extremely rich and powerful,” Nekrasova says. “For them, it’s almost like if you can buy anything, you end up putting a price on human life, and that’s unspeakably evil.”

Not that The Scary of Sixty-First makes that argument directly. It’s an of-the-moment film that revels in the kinds of shocks that make Red Scare hilarious to some listeners, and offensive to others.

She has no interest in tamping down that approach, even given the role on Succession, which is bringing a new wave of mainstream attention. The latest episode of Red Scare, released last month, features a no-apologies interview with Infowars owner Alex Jones, a pariah of the left.

“I don’t think you can get canceled if your heart is pure. I say lots of things that may be factually incorrect on the pod,” Nekrasova says. “I’ve never purported to be speaking from a place of any kind of moral or official authority or anything. I think a podcast is a very casual and discursive medium that I very much like doing. I know that it’s been controversial or provocative in the past and will probably continue to be. ‘It’s my path,’ as my character says in the movie. I don’t worry about it because I’m not a pundit or a public figure who is working from a place of any kind of malice.”

She adds: “There’s a legacy of irony in Russian literature and filmmaking, especially in the late Soviet period. It’s an instinct of mine that I don’t see myself parting with.” She was born in Belarus and emigrated to Las Vegas with her circus-performer parents.

“I’m sure that growing up in a circus context did influence me as an artist, definitely,” she said on a recent Zoom call with MovieMaker, as The Scary of Sixty-First premiered at the 71st Berlin International Film Festival in March. She studied philosophy at Mills College in Oakland, California. After graduation, she wasn’t sure what to do — “I didn’t know if I wanted to be an actress or a writer or a poet” she says — but she knew staying in the Bay was untenable. 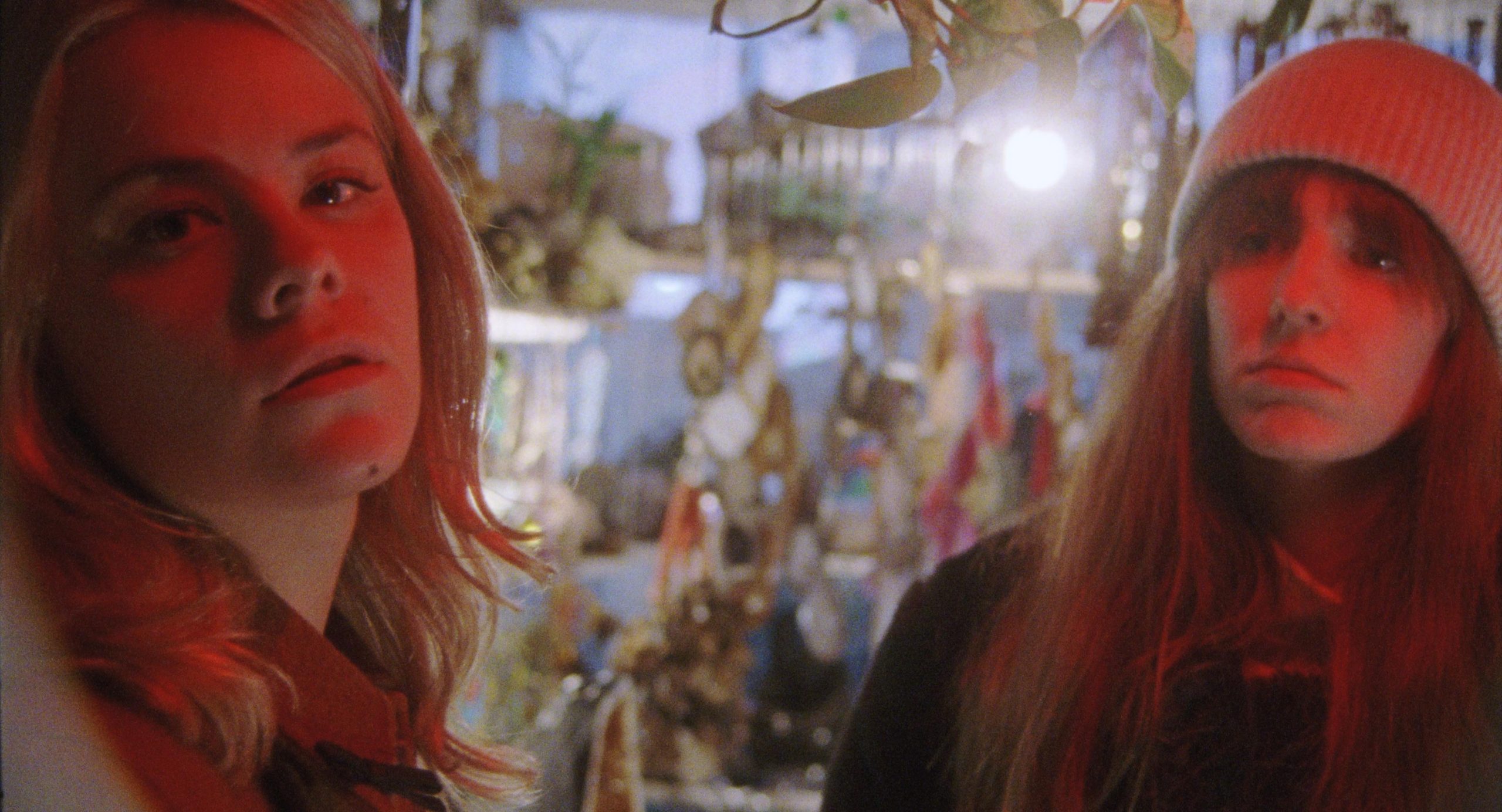 Dasha Nekrasova and Madeline Quinn both write and star in The Scary of Sixty-First. Photo by Hunter Zimny

“I got pushed out of San Francisco because I couldn’t afford to live there anymore. I was basically unemployable because I had a humanities degree. It was when Silicon Valley was really starting to emerge in the Bay Area, and it was just getting more and more expensive and I was just flailing really hard. I ended up in L.A. just because it was the most affordable place to go for me at the time.”

She moved to L.A., where she first began acting. Her parents were understandably concerned. “They emigrated in line with the typical American Dream of me becoming successful as a lawyer or something. They wanted me to have an easier life than they did as gymnasts.”

After appearing in a few music videos, she made Wobble Palace with Kotlyarenko, a Ukrainian-American moviemaker, who, like Nekrasova, came to the U.S. as a child from the former Soviet Union.

Nekrasova achieved social media fame — and gained the nickname “Sailor Socialism,” while attending South by Southwest in 2018 to promote Wobble Palace. Drinking an iced coffee and glancing at her iPhone, she was approached by a reporter for the conspiracy-laden Infowars, who put a microphone in her face and asked, “Are you a fan of Bernie Sanders?”

Nekrasova, wearing a sailor top, smiled back: “Yeah, I am.”

She tried to beg off as the Infowars reporter excitedly asserted that socialism has led to a majority of Venezuelans eating rats, to which Nekrasova calmly replied, “I just want people to have healthcare, honey. … You people have like worms in your brain, honestly.”

The viral attention that followed — including a mention on Last Week Tonight with John Oliver— helped boost Nekrasova’s profile and immediately put Red Scare on the map after its launch shortly thereafter.

This was all coincided with a move to New York, which led to her acting more regularly, with small roles in television shows like Mr. Robot and Dickinson, and even voicing a character in popular PC game Disco Elysium. “L.A. has a very palpable aura of desperation — New York does too in a different way—but that’s a terrible place, for me at least, to make work from or to be creative from — this feeling of extreme scarcity and marginality,” she says. “I often felt in L.A. like I was really about to fall through the cracks at any moment. … I don’t know how to drive. I like a lot of things about L.A., but my lifestyle was just becoming increasingly abject.”

She adds: “New York just feels like a grid system that is a little more supportive, just psychogeographically.”

The podcast is part of that support system. Patreon subscriptions from nearly 13,000 paying fans bring in over $55,000 a month. Nekrasova and the Moscow-born Khachiyan describe themselves as “bohemian layabouts,” and The Cut has described their podcast as “a critique of feminism, and capitalism, from deep inside the culture they’ve spawned.” They often complain that class divides can be overlooked amid discussions of racism and sexism. Guests have ranged from Trump advisor Steve Bannon to journalist Glenn Greenwald to British moviemaker Adam Curtis to Slovenian philosopher Slavoj Žižek to presidential candidate Tulsi Gabbard. They praise Camille Paglia, French author Michel Houellebecq and Melania Trump’s fashion. Chloë Sevigny counts herself as a fan, and underground newspaper The Drunken Canal predicted that “DASHA will become the new and better Chloë Sevigny.” 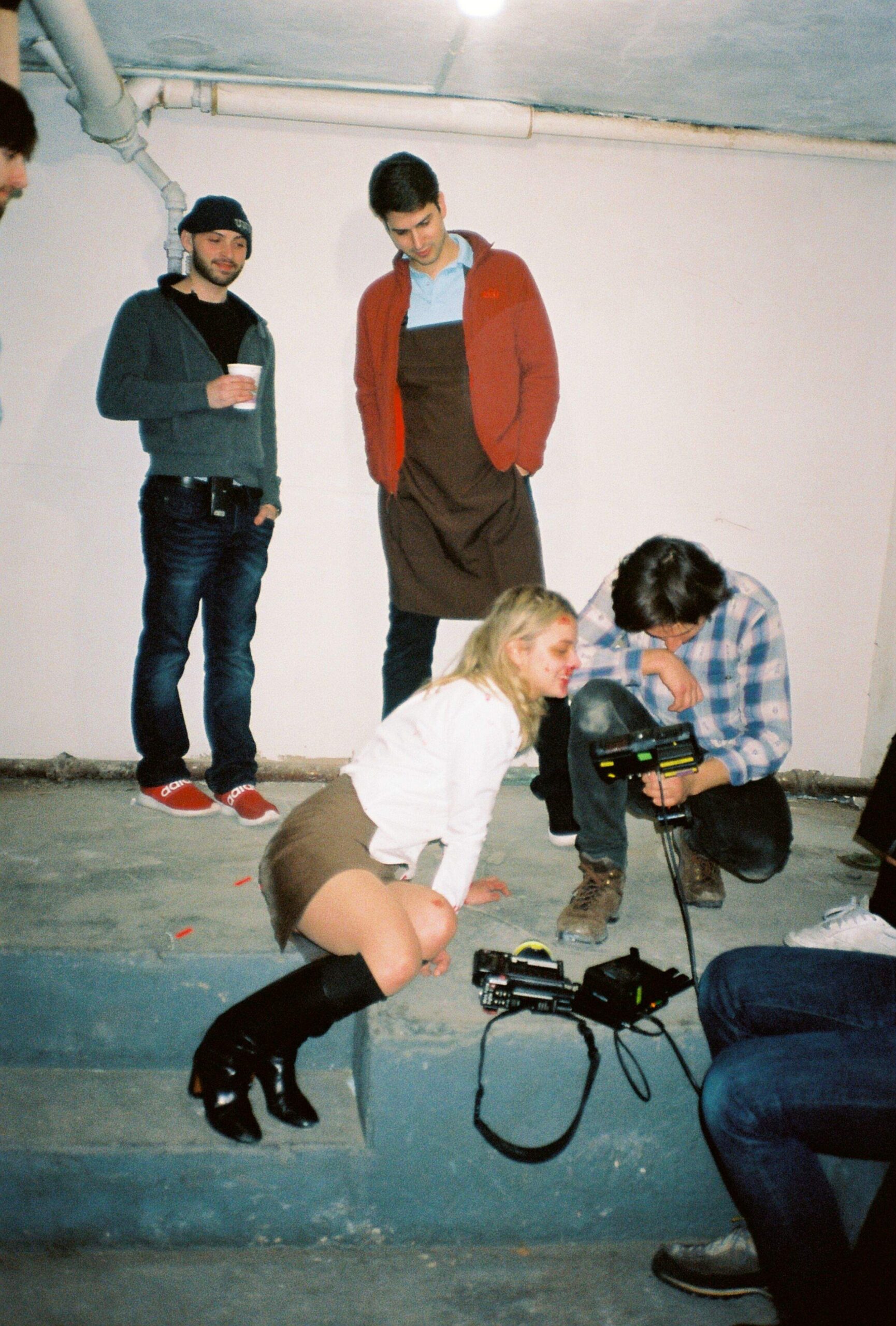 Dasha Nekrasova and her cast and crew on the set of The Scary of Sixty-First. Photo by Louis Miller.

Nekrasova and Khachiyan regularly designate people as a “friend of the pod,” and Nekrasova was able to make Scary in part because of them.

Nekrasova met her co-writer on Scary, Madeline Quinn, through Twitter, and “started hanging out more when I moved to New York.” They wanted to collaborate.

“I guess we just thought each other were pretty funny,” says Quinn.

The two began meeting on the roof of an Equinox on 61st Street, just weeks after Epstein’s death to hash out an idea. Nekrasova says the plan was set “initially as a short,” but that “it developed into a feature over the span of a few months.”

They moved the writing sessions to Quinn’s apartment, where they hooked an HDMI cable from a laptop to the TV and used the screenwriting software Fade In so they could collaborate. Both ended up acting in the film, and they blocked out scenes as they wrote.

Around this time, Nekrasova began acting in a BBC series The Serpent, which had her flying back and forth to Thailand. This affected the script in several ways.

“I was spending a lot of time in Thailand for work, and that was very informative on my perspective on human trafficking and global inequality in a really vivid way. But also, the influence of jet lag is present in the scripting as well, and that’s why the sense of time is so weird. The movie actually only spans three days, but the way that it’s written, it isn’t quite as clear, because there’s so many psychedelic drug sequences. It’s a very contained script, but the logic of it is very jet lagged.” 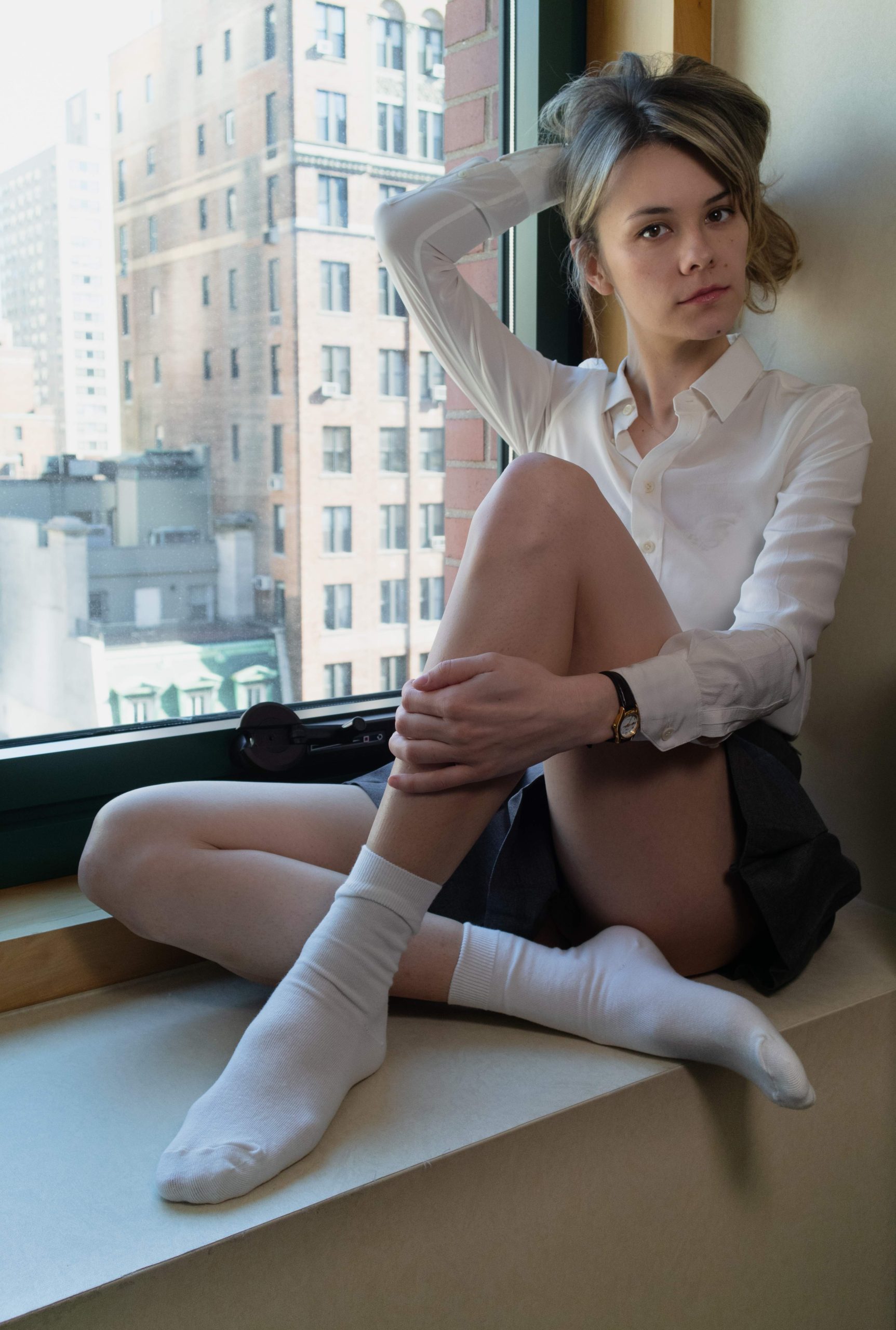