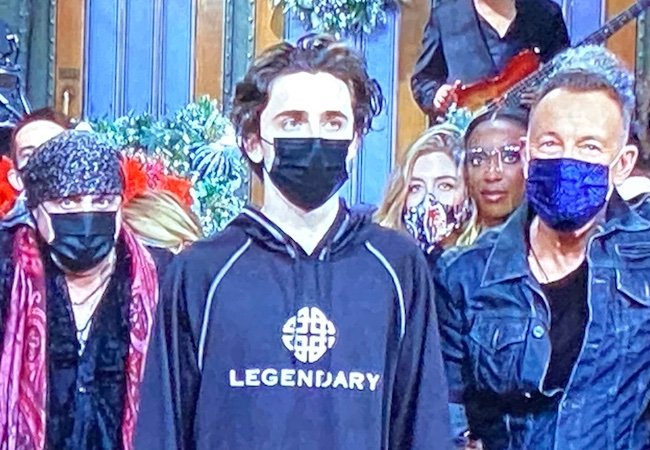 In today’s Movie News Rundown: Joe Manganiello tells us how he channeled his Batman heartbreak; Timotheé Chalamet may be trying to tell us something; and John Le Carré dies at 89.

Chalamaybe: Dune star and Saturday Night Live host Timotheé Chalamet wore a Legendary hoodie during the SNL curtain call this weekend, which some saw as a gesture of support for the company that helped fund Dune — and decided to sue Warner Bros. over its decision to release Dune on HBO Max at the same time the film is released in theaters. Last week Dune director Denis Villeneuve said Warner Bros.’ corporate parent, AT&T, had “hijacked” his film.

Deathstroke: We just talked with writer-director Adam Egypt Mortimer and producer-star Joe Manganiello about their new film Archenemy, in which Manganiello plays a homeless alcoholic who may also be a superhero from another dimension. Manganiello explained that after he lost out on the chance to battle Ben Affleck’s Batman in Affleck’s abandoned The Batman, he poured his heartbreak and frustration into Archenemy. It was a fun talk you can listen to on Apple or Spotify  or here:

Boston Film Critics: The Boston Society of Film Critics has named Chloe Zhao’s Nomadland the best picture of the year. Zhao was named best director, and Joshua James Richards best cinematographer. Here’s the full list from the group, which is known for often picking future Oscar nominees. (I’m writing this from Los Angeles and not saying anything even remotely bad about Boston, a terrific city, so can we please make peace now. I talked to New York, too, and they don’t even remember why you’re mad at us.)

R.I.P John Le Carré: The novelist, whose real name was David Cornwell, died Saturday at the age of 89, his literary agency, Curtis Brown, announced. The British intelligence officer-turned-writer died after a short illness unrelated to COVID-19. Curtis Brown said his third novel, The Spy Who Came In From the Cold, made him “the most famous spy writer in the world.” It was adapted into a film starring Richard Burton. Other Le Carré film adaptions included 1984’s The Little Drummer Girl with Diane Keaton, 1990’s The Russia House with Sean Connery, 2005’s The Constant Gardener with Ralph Fiennes and 2011’s exquisitely titled Tinker Tailor Soldier Spy, starring Gary Oldman.

Movies With No Antagonist: Here’s an interesting Reddit thread. I love movies with no bad guy. One of the best is Debra Granik’s outstanding Leave No Trace from 2018, where every single character means well. I think Sound of Metal, which we saw and loved over the weekend, also fits this description.

Is It Weird to Anyone Else: To see Timotheé Chalamet, who will soon play Bob Dylan, standing next to Bruce Springsteen, musical heir to Bob Dylan? Anyway, I probably only noticed this because very soon we’ll have an interview with director Jesse Dylan, actual heir to Bob Dylan, whose latest film is the new documentary Soros.

‘I Got Honest. I Got Clean. You Can Too’: Via The Hollywood Reporter, Danny Trejo, sober for more than half a century, serves up some motivation to anyone struggling with addiction, especially in these isolated, frustrating times.