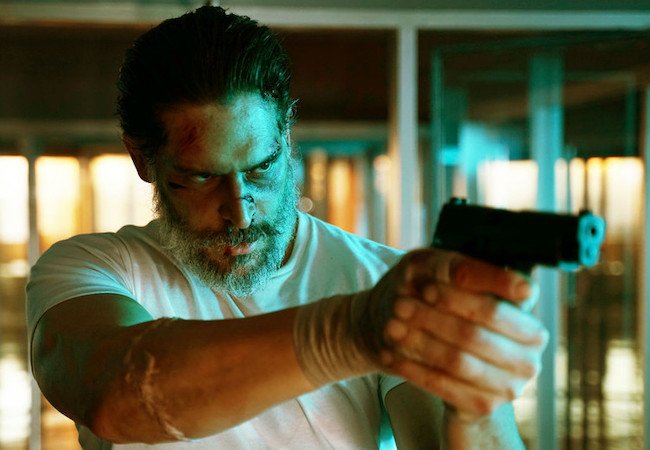 Joe Manganiello says not getting to play the villain Deathstroke in the abandoned Ben Affleck movie The Batman was the biggest heartbreak of his career. But he funneled his disappointment into Archenemy, the new film from Adam Egypt Mortimer in which Manganiello plays a very different kind of hero.

Manganiello stars in Archenemy as Max Fist, a homeless alcoholic who claims to be a superhero from a planet called Chromium in another dimension. He finds purpose thanks to an aspiring reporter named Hamster (Skylan Brooks).

Manganiello and Mortimer are both huge comic-book fans — Manganiello’s first big role was as Flash Thomson in Sam Raimi’s Spider-Man films — and they talk in the latest MovieMaker podcast about how they mined their past professional disappointments to tell the story of Max Fist. You can listen on Apple or Spotify or above.

Manganiello was perfectly cast as Deathstroke, a ruthless, brilliant assassin. He appeared in the role in a brief scene at the end of Justice League, which was supposed to set up a face-off between Deathstroke and the Dark Knight in Affleck’s version of The Batman. But the film never happened.

“It broke my heart, and it wasn’t the first time,” Manganiello says on the podcast. “I’ve had horrible, horrible, debilitating heartbreaks in my 20 years bouncing around town, but that was probably the worst. It hurt for a while… I had done so much work already for that film that I found out we weren’t going to shoot.”

The work included training with katana swords, as well as multiple forms of martial arts and workouts with Navy SEALS to get into Deathstroke’s “headspace,” he says. But his training also infused him with energy and discipline.

“Because of all of that work, I picked myself up off the ground, off the mat, and wrote a 16-page treatment for a Deathstroke origin film that the studio was very excited about,” he adds.

Manganiello says an Oscar-nominated writer worked on the treatment, and he had a lengthy talk with The Raid director Gareth Evans, but the Deathstroke project, like the Affleck Batman film, didn’t come to be, due to a Warner Bros. shakeup.

Manganiello says about five other versions of the Deathstroke project were scheduled — and then cancelled.

“It’s a tough business,” he says. “So when when this script — Archenemy — came across my desk, yes, I was fired up. And I think a lot of that angst and energy, and even disappointment, went into my passion for this project, and making this thing happen.”

Mortimer said he, too, refocused creative frustrations into Archenemy.

“We got to channel all of that into the character. Those kinds of feelings of heartbreak and disappointment went into the writing,” Mortimer says. “That’s what this character is — this is a character who came close, but fell further than he had risen. And then how do you recover from that? Do you spend your life moping and drinking? Or do you go out and punch some shit?”

Mortimer adds: “As an aspiring filmmaker, every day of my life, you know, feels like Max Fist. You sort of imagine to yourself, ‘I’m going to be an amazing filmmaker,’ then people pass on your projects, and you realize, ‘Oh, my God, if I get hit by a bus tomorrow, no one will ever know that I was an amazing filmmaker.'”

Mortimer continues. “Your mind does to you what Max Fist’s story is. And so I think Joe and I were able to sort of bond over these kinds of disappointments.”

Affleck famously abandoned his Batman film after a complicated Justice League shoot. “I showed somebody The Batman script,” Affleck told The New York Times in February. “They said, ‘I think the script is good. I also think you’ll drink yourself to death if you go through what you just went through again.’”

With Affleck out of the picture, Matt Reeves became the writer-director of the next Batman, which will star Robert Pattinson as the capped crusader.

While Manganiello may never star opposite Affleck in a Batman film, he is getting another chance at playing Deathstroke: He’s suiting up again as the character for Zack Snyder’s upcoming streaming version of Justice League, coming next year to HBO Max, which will include a re-edit of the 2017 Justice League, including new scenes.

Archenemy is now in selected theaters and available on VOD. You can also join an exclusive screening and release party for Archenemy, featuring Adam Egypt Mortimer and Joe Manganiello, on Sunday, Dec. 13, at 5 PT/8 ET.