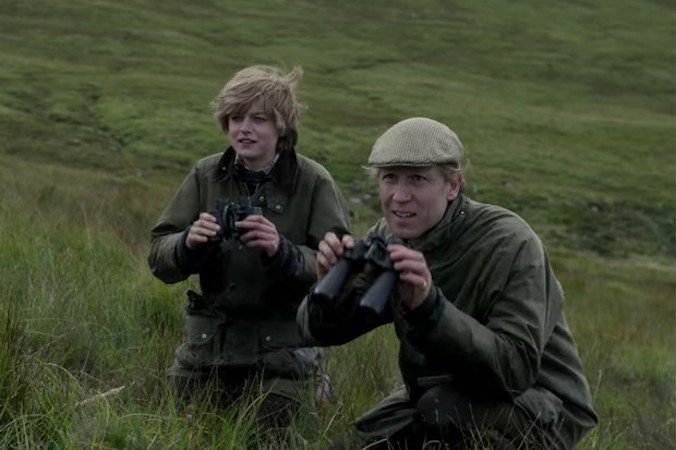 The Crown frequently foreshadows that Princess Diana will die fleeing photographers. But it skips one opportunity to do so in Season 4, Episode 2, “The Balmoral Test,” in which Diana Spencer wins over Charles and the Royal family during a few days at Balmoral Castle in the Scottish highlands.

As with every episode of The Crown, creator Peter Morgan hews to actual events, fictionalizing particular moments and conversations based on extensive research into Charles, Diana, Queen Elizabeth II and the other central characters on the show.

The Balmoral Castle visit really did happen, in September 1980, when Diana was 19 and Charles was 31. But the episode does not show every moment of their time at Balmoral — and notably skips one real-life event that grimly hinted at Diana’s future. Though the episode is focused around the Royals stalking a wounded buck, it makes no mention of an actual stalking of Charles and Diana that occurred at Balmoral.

Balmoral is deeply significant in Charles and Diana’s relationship, because it was the first time the news media received any inkling of it. Princess Diana would be a source of endless fascination for many in the celebrity press, and paparazzi stalking would eventually lead to her death: She died in Paris in 1997 while fleeing photographers.

As The Crown notes, Diana (Emma Corrin) met Charles (Josh O’Connor) as a teenager while her older sister, Sarah, was dating him. And as The Crown illustrates, they first met in Althorp, the Spencer family’s family’s estate, in November 1977. He was 29 and she was 16.

Diana said in a real-life interview that they “sort of met in a plowed field.”

“What I remember thinking is what a very jolly and amusing and attractive 16-year-old she was,” Charles said in the same interview, which they gave after their engagement in February 1981. He added that he also found her “bouncy and full of life.”

(The Crown seems to have taken some dramatic liberties with their first meeting — we’ll get to that shortly.)

The book Diana, by Sarah Bradford,says that when she and Charles first met, Diana considered herself “a fat, podgy, no-makeup, unsmart lady, but I made a lot of noise and he liked that…”

Bradford writes that Charles approached Diana after dinner, and that they “had a big dance,” but that Sarah quickly interrupted them.

The Crown makes clear that Sarah later became engaged to someone else, but does not mention one reason for Charles and Sarah’s breakup: She violated the Royal families’ strict adherence to privacy and not sharing secrets with the press, insulting Charles in the process.

Bradford writes that Sarah Spencer made the large mistake of giving an exclusive interview to British tabloid reporter James Whitaker in which she described her relationship with Charles as “brotherly-sisterly” and said he didn’t want to marry. She also said she would turn him down, if he asked.

She later told Charles of the interview, who according to Bradford responded, “Yes, Sarah, you have done something extremely stupid.”

At her sister Jane’s April 1978 wedding, Diana confronted Whitaker, according to Bradford, telling him, “You’re James Whitaker, aren’t you? I know all about you. I’m Sarah’s baby sister.”

Bradford writes: “It was the beginning of Diana’s lifelong affair with the media.”

When Charles and Diana began to explore a relationship, he invited her to Balmoral, the queen’s Scottish castle, as seen on The Crown.

The show suggests that some of the Royals engaged in cruel and petty ways of hazing guests at Balmoral, switching between casual and formal behavior in a way that non-Royals, including Margaret Thatcher, found disorienting.

The book Diana: Her True Story — in Her Own Words, by Andrew Morton, says that Diana was “terrified” about behaving correctly at Balmoral, just as she is in the show. But her fears proved to be initially unfounded — she enjoyed a “wonderful” few days, joining Charles for walks or barbecues, Morton writes.

But then: Who should appear but James Whitaker, the tabloid reporter who had helped ruin her sister’s relationship with Charles.

Charles and Diana were fishing when she realized someone — it turned out to be Whitaker — was watching them through binoculars, Morgan writes. Diana was no doubt well aware at this point of Charles’ distrust of the press.

Morton says Diana told Charles to keep fishing, and spent half an hour hiding behind a tree, using her makeup mirror to spy on Whitaker and two photographers.

She finally foiled the press, Morton writes, by escaping with her head covered in a “headscarf and flat cap” — a moment captured in this photo.

The Crown may have taken inspiration from this moment in the first episode of Season 4, “Gold Stick,” and exercised some poetic license to create a charming meet-cute.

In the episode, Charles waits for Sarah at Althorp, but notices a spritely character dashing from behind one potted plant to another. It turns out to be Diana, wearing a tree costume for a school production of A Midsummer Night’s Dream. She wears a mask as part of the costume.

She is hiding behind vegetation and concealing her face — just like the real Diana did at Balmoral.

The Crown: How Old Was Diana When She Met Charles?
Did Margaret Thatcher Really Say Women ‘Tend Not to Be Suited to High Office’?