The Crown: Margaret Thatcher Shows Us What Trump Might Have Been — With Discipline 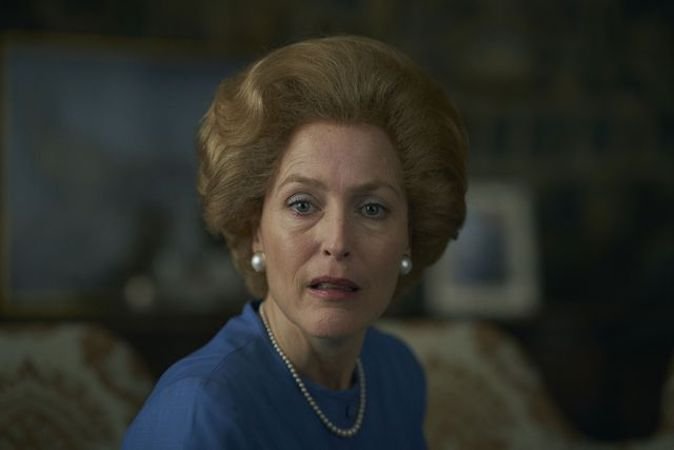 The Margaret Thatcher spikily portrayed by Gillian Anderson on Season 4 of The Crown bears a lot of similarities with fellow conservative Donald Trump: She wants to muck out Great Britain’s equivalent of the so-called Deep State, drain its symbolic swamps, and reject snobby traditionalists. But there’s a difference between her and the American president currently clinging to the job from which he’s been summarily fired:

The Crown mixes true events and fictional, but deeply researched, dramatization. It is largely a show about duty: Who fulfills it, and who doesn’t. It rarely places value judgements on policy issues, or espouses liberalism or conservatism. It examines how people adhere to traditions, or change them.

The Netflix series would never be so hacky as to draw direct parallels with Trump or any other leader. But watching the show, which returned Sunday, during the last, lazy rasps of the Trump presidency makes it impossible to ignore the differences in work ethic and personal discipline between Trump and Thatcher.

Also Read: The Crown: How Old Was Diana When She Met Charles?

In its four seasons, The Crown has shown us how Queen Elizabeth II (played by Clare Foy, then Olivia Colman) dutifully accepted a crown she didn’t want from her father, who also didn’t want it, and worked with a series of prime ministers, starting with Winston Churchill, to lead the UK through the tumultuous years after World War II and into the modern age.

The latest of these prime ministers is Margaret Thatcher, who has a difficult introduction to upper-class tradition in Season 4, Episode 2, “The Balmoral Test.” At Balmoral Castle in the Scottish Highlands, the Royals engage in silly parlor games, hazing outsiders, and stalking prey. The discovery that a wounded 14-point stag is nursing its wounds on the grounds upsets any semblance of routine, and the entire family becomes fixated on adding its taxidermied visage to the wall.

Thatcher is a hardline conservative, and life at Balmoral strikes her as frivolous and wasteful: There’s so much work to do. She desperately wants to get her rebellious cabinet in line and impose aggressive fiscal discipline on Great Britain. There’s a strong case to be made that she’s too conservative, and that her cutbacks will lead to widespread unemployment, but The Crown isn’t especially concerned with that. It just wants to make the inarguable point that the Iron Lady was both ambitious and tough.

Trump, as consecutive elections show, is excellent at getting out his base. But he’s the opposite of Thatcher in personality. As much as he might profess to share her distaste for the elitism of Balmoral – the kind of elitism that scolds you for both underdressing and overdressing, as one scene illustrates — he does share in the Royal families’ Balmoral work ethic.

Even as his most desperate holdouts demonstrated in the streets of Washington, DC on Saturday to wrongly declare him the winner of the election, Trump went golfing. He golfs far more than his predecessor, whom Trump used to criticize for excessive golfing. There are even sites dedicated to how much he golfs, and how much it costs taxpayers.

In contrast, the Thatcher of The Crown ducks out of an early-morning stag stalking expedition to go back to Balmoral and change her outfit —  but once back, she sits down at Queen Victoria’s desk and gets to work.

Trump is known for late-night tweets about things he watches on TV. Thatcher on The Crown misses sleep to work.

And while Thatcher on The Crown dispatches cabinet ministers who she sees as behind the times and unwilling to carry out her aggressive agenda, Trump fires those — like Secretary of Defense Mark Esper — whom he sees as insufficiently loyal.

And unlike Thatcher — whose intense discipline helped her rule as Great Britain’s prime minister from 1979 to 1990 — Trump’s sloppy handling of a pandemic and economic crisis has limited him to one term.

Michael Moore to Joe Biden: Abolish the Electoral College, Give Us Ice Cream
The Crown: How Old Was Diana When She Met Charles?