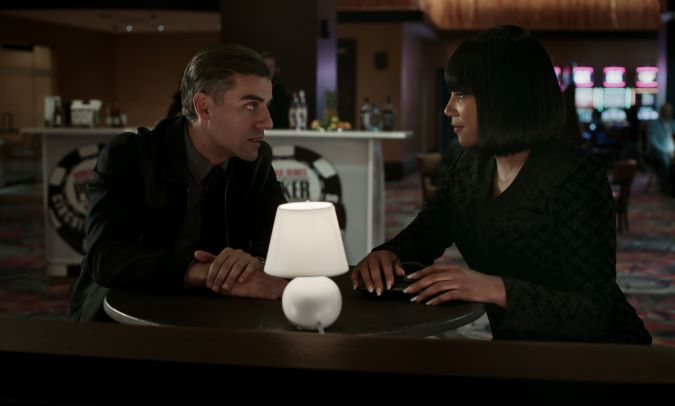 The Card Counter writer-director Paul Schrader has been making classic films since the 1970s — but he still embraces digital cinematography.

“Certainly, there’s a lot to be said for film,” Schrader tells MovieMaker. “But the advantage of digital is obviously that it’s just so much faster — everything is faster.”

He continues: “There’s almost no relighting, and you never leave the set. You used to have all that trailer time. But now, if I had to set up a scene and enter my trailer, by the time I reached the door of my trailer, the PA would be tapping me on the shoulder: ‘Mr. Schrader, they are ready.’ So it allows you to move much, much quicker.”

Schrader rattles off more advantages: “You don’t have any reload time. You don’t cut gels as you can relight from your iPad. And that’s only half the story. The other half is that you can relight the whole thing in post.”

Schrader says shooting digitally gave him much more creative control on The Card Counter, which stars Oscar Isaac as a poker player consumed with guilt. Final cut is especially important to Schrader after he lost it on his 2014 film Dying of the Light.

“You’re dealing with the economics of a 20-day shoot. We didn’t shoot anything that’s not in the film. You can’t afford to take longer than you need to do something. That’s the price you pay for freedom — I have final cut, and no one tells me what to do. But I better make those 20 days, and I better keep the audience interested,” he says.

The Card Counter is Schrader’s third collaboration with cinematographer Alexander Dynan after Dog Eat Dog (2016) and First Reformed (2017), and all were lensed digitally.

Nighttime exteriors are a major perk of digital cinematography. In Schrader’s commentary track for the Blu-Ray release of his 1979 film Hardcore, he comes off a little hard on himself as he bemoans the lack of camera movement and points out sequences that seem over-lit. At one point he jokes that he needs sunglasses, and compares a location to a supermarket.

“I remember going in there as the grouchy old man, attacking my film for an hour and a half,” Schrader says of the commentary, which was recorded in 2016.

“Back in those days, everything was over-lit, and it really wasn’t until digital — the first one was Miami Vice — where they could really film with available light at night,” he continues. “Otherwise at night you’re always pouring all this light in. And you can always tell on some of these films, particularly exteriors, where the character is too bright. We were always afraid that you couldn’t see the characters.”

Schrader says one exception from that era was cinematographer Gordon Willis and Francis Ford Coppola’s collaboration on The Godfather trilogy. For those films, he says, “it didn’t matter. So what, you can’t see him very well?”

“But a normal film, you would get a call the next day after dailies from the studio yelling at you that everything is too dark.”

Asked about recent low-budget American indies that are shot on 16mm and allow viewers to miss details during dark sequences, he replies bluntly: “Well, it’s a bad choice.”

The Card Counter, written and directed by Paul Schrader, is now in theaters.

Main image (above): Oscar Isaac and Tiffany Haddish in The Card Counter, from writer-director Paul Schrader.