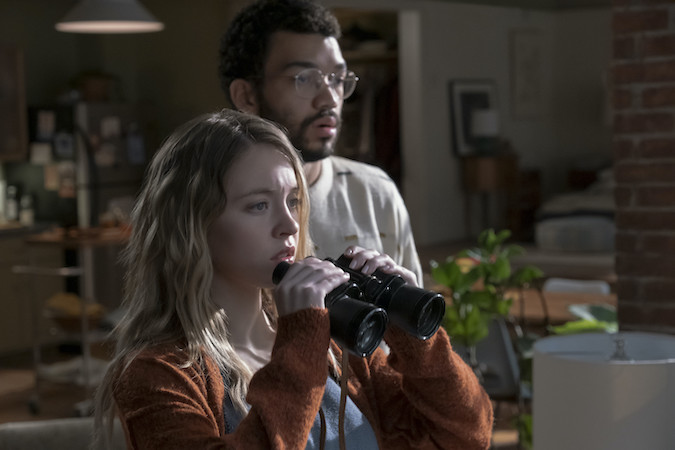 To Mohan, it’s important to distinguish between the different subgenres that make up this category of film.

“You’ve got movies like Body Heat and Wild Things that are these sweaty neo-noirs,” Mohan says. “And then you have ‘[blank] from Hell’ movies, like ‘the Nanny from Hell’ in The Hand That Rocks the Cradle.”

But there is another subgenre, which Mohan calls “steamy moral dilemmas,” which include Adrian Lyne films like Unfaithful and Indecent Proposal, that Mohan hopes The Voyeurs will join.

“What I love about those movies is that you’re going to have an opinion on whether or not the character made the right decision. And the person next to you is going to have a completely different opinion, but will be just as passionate. And you get to have these fun arguments after the movie is over,” he says.

In The Voyeurs, Sydney Sweeney and Justice Smith’s characters, Pippa and Thomas, spy on their neighbors (played by Ben Hardy and Natasha Liu Bordizzo) — a couple who don’t seem to understand how blinds work. Mohan worked with cinematographer Elisha Christian (his roommate from film school) to subtly visualize the closing spaces between the two couples.

“What we wanted to achieve is that these apartments that are far apart felt like they were getting closer and closer together as the movie went on, but it was all motivated by story,” Mohan says.

“When they’re first looking over there, they’re just looking with their naked eye. So it has to be wide. It can’t go close, because she can’t see. The next night, when they look, we went just a teeny bit tighter on the lens. And then when they get the binoculars, that’s when we’re on that longer POV lens, and we stuck with it. And then as the movie went on, we would tighten up our lens further and further from there.”

Ben Hardy’s character, Seb, is watched through binoculars in The Voyeurs, written and directed by Michael Mohan. Photos courtesy of Amazon.

Pippa and Thomas not only watch, but also listen in on their two neighbors, with the aid of a nifty laser pointer trick. Francis Ford Coppola’s The Conversation is a big inspiration on The Voyeurs, and these audio elements play into that reference.

Mohan worked with sound designer Nathan Ruyle to subtly transition a bustling city soundscape into a more intimate drama as the story wears on.

“When the couple first moves in together, you’re hearing all the traffic, you’re hearing ambulances, you’re hearing construction all around them,” Mohan says. “But then as the movie goes on, and they’re focused more and more in on this couple across the way, the sound of the city melts away until that one fateful night where Pippa crosses the line — you can almost hear a pin drop.”

That moment is marked by one of those character decisions sure to get audiences debating. Without spoiling anything, the plot boils over in its final act with a number of twisty turns.

The Voyeurs, written and directed by Michael Mohan, is now available to stream on Amazon Prime Video. Main image (above): Sydney Sweeney and Justice Smith in The Voyeurs, from writer-director Michael Mohan.

Here’s What a 1947 Movie About a Wild Night Out Has in Common With The Hangover
How Werner Herzog Inspired Us to Make Too Soon: Comedy After 9/11