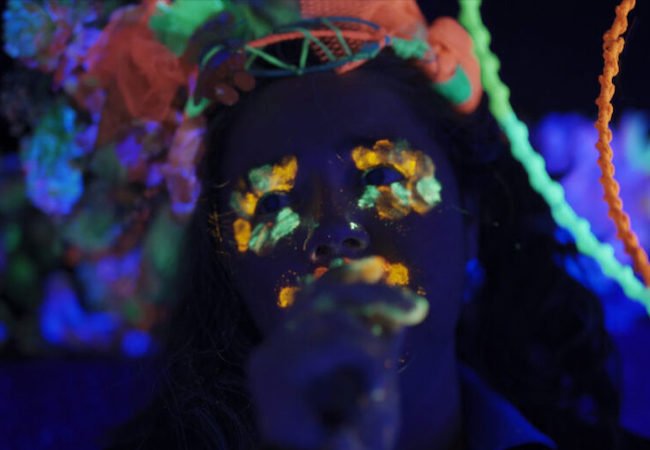 Texas Trip: A Carnival of Ghosts begins with a series of just-the-good-parts clips from long-forgotten drive-in movies: monsters, glares, egregious nudity. It’s mesmerizing, and gets you stoned enough to accept the rather shapeless but nonetheless beautiful semi-story that follows.

I watched the documentary as part of Montreal’s virtual Fantasia Fest this weekend, and the experience successfully captured the feeling of seeing a midnight movie you know nothing about in a place you don’t understand. It’s tempting to reject the strange images onscreen as too weird to matter — not many people will like this, so I do I even need to worry about it? But such experiences can also lead you to question why you’re so willing to accept some things as weird and others as normal.

Where is the tipping point at which something moves from garish and outsider and into “normal”? Does outsider art become worthy of your attention when it makes its way to YouTube? Broadway? TV? When it’s monetized? How many people need to attend a show for us to respect the music performed there? The film made me question if I’m part of a culture at all, or just an economy. 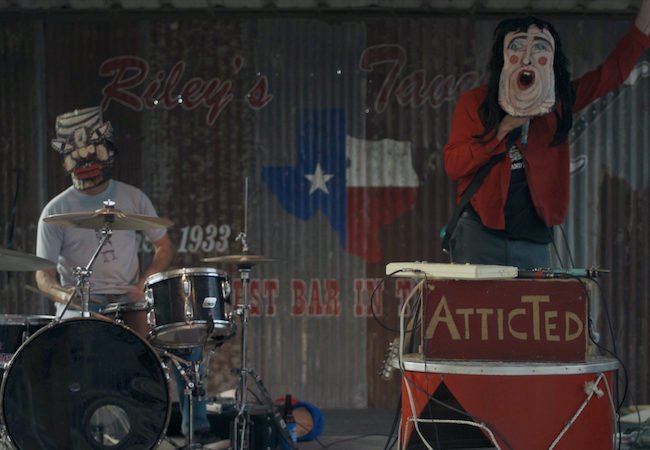 In one of my favorite scenes in Texas Trip, a good ol’ boy nursing a beer at a picnic table decides a noise-rock band taking the stage isn’t for him, politely applauds, and stands up to go. It’s a succinct, graceful acknowledgment by filmmakers Steve Balestreri and Maxime Lachaud that the artists in the film aren’t for everyone, and that that’s okay.

The noise artists and mask makers profiled in Texas Trip play for relatively small audiences, but ones that seem occasionally rapt. You wonder, at times, if they’re weird for the sake of keeping it weird, or if, to them, popular culture is what’s weird.

Also Read: Yummy Is Finally a Zombie Movie That Puts Cheap Thrills Ahead of Social Commentary

The filmmakers make the case that these outsider artists, with their saws and garish masks and makeup, are continuing the forgotten drive-in culture that celebrated zombies, topless girls, and fake-looking aliens. I don’t find this connection convincing, honestly. It feels like the filmmakers observed two things about Texas — there are a lot of haunted-looking drive-ins, and some outsider artists — and sought out a causal relationship between the two. It would be like me noticing that California has beautiful Redwood forests, and that Los Angeles hip-hop group The Pharcyde made great songs, and assuming the two must be related.

Maybe they are, but I don’t see how. Nonetheless, I like them both. Traipsing through a redwood forest listening to the Pharcyde sounds nice, and Texas Trip is similarly pleasurable: majestic, strange, specific. The cinematography and editing are superb. I didn’t always understand the connections, but I was pleasantly lost in the trees.

I barely caught the names of the artists profiled during the film, and subsequent Googling about them turned up almost nothing, which seems to be intentional on the artists’ part: As some state explicitly, they are not playing the game. Balestreri and Lachaud, meanwhile, ignore many of the the journalistic conventions that accompany most documentaries, like using text to identify the people onscreen. Among the things I wondered about: Which of these similar-looking white guys is AtticTed? Are these people all friends? What year was all this filmed? None of these questions troubled me very deeply or distracted from my enjoyment of Texas Trip.

In a fireside scene where two artists aged young-but-getting-older talk past each other about the meaning of life, the woman observes that for normal people, life seems to revolve around staring into your phone. She’s right, I do spend a lot of time doing that, and my life doesn’t feel healthier or more normal than hers as a result.

We’re all running out of time, but to do what?

Texas Trip: A Carnival of Ghosts, is part of Fantasia Fest, continuing this week.