Yummy: Finally a Zombie Movie That Puts Cheap Thrills Ahead of Social Commentary 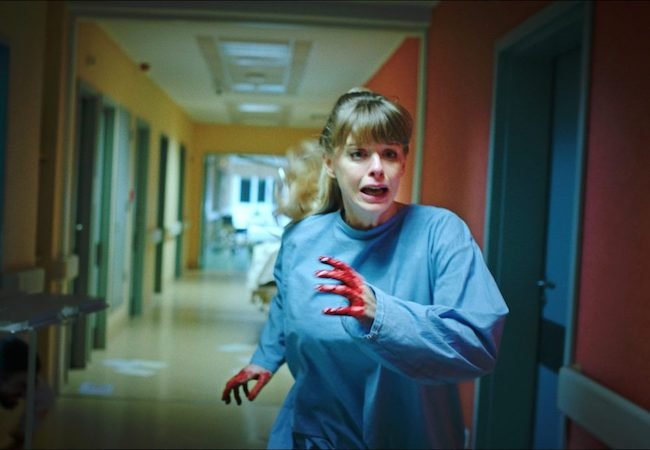 Yummy is a tasteless, grotesque film that abandons the proud tradition of using the undead as a metaphor for our own inhumanity. I liked it.

Yummy, a SXSW selection now part of Montreal’s Fantasia Festival, is billed as the first Belgian zombie movie. A foreign zombie film in both French and English, set in Eastern Europe, may sound like the kind of arthouse, elevated horror that critics might embrace.

But no: Yummy just wants to keep shocking you with how hilariously tacky and violent it is, and keeps succeeding.

It’s a horror comedy, but the comedy mostly comes from the audaciousness of the way the movie keeps one-upping itself. There’s an intestine-rope scene that recalls the one in Machete, as well as a scene involving a surgically enlarged penis and an accelerant that serves as the film’s gloriously ridiculous centerpiece.

Director Lars Damoiseaux maintains a brisk, engaged pace. After a great opening involving a botched cremation, we meet Alison (Maaike Neuville, pictured), who is cursed with huge breasts and travels to a cheap cosmetic clinic for help. Pawing at her for far too long during her preliminary examination, unethical plastic surgeon Dr.Krawczyk (Eric Godon) suggests she go up a cup size or two, before finally understanding that no: She wants them reduced.

The silly running joke of the film is that everyone she encounters seems to have a vested stake in her not getting them reduced, which underscores exactly why she’d like the attention to end. When her boyfriend Michael (Bart Hollanders) tries to halt the reduction surgery — because zombies are attacking! — everyone assumes he’s just being selfish. (Michael suffers from hemophobia — fear of blood — which makes Yummy one of the least opportune movies in which he could be trapped.)

Since Night of the Living Dead, filmmakers have recognized zombies as a powerful metaphor, but now it’s been done to undeath.

Yummy could have scored critical points by satirizing our obsession with beauty standards, but nope: It just wants cheap thrills, and nastily delivers. Kudos to Yummy for not pandering to our highest instincts.

Yummy is part of Fantasia Fest, continuing this week.