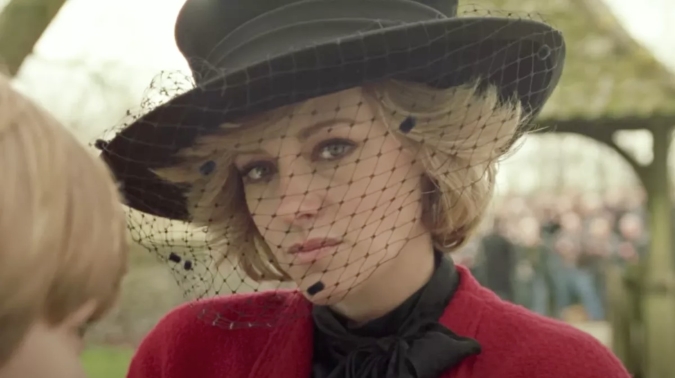 Diana Spencer: Pablo Larraín’s latest Spencer, which tracks an unraveling Princess Diana over three days around Christmas, hits theaters today. In the new MovieMaker podcast, Larraín explains when he realized the movie was actually about motherhood.

Pity the Agents: Also on the MovieMaker podcast, The Beta Test filmmakers Jim Cummings and PJ McCabe explain how they realized, while making the movie, that many Hollywood agents have rather sad lives.

A Time-Travel Tip: Films require an active suspension of disbelief and moviemakers should lean into that whenever necessary, Academy Award-winner John Ridley tells MovieMaker, explaining why he felt no need to explain how time travel works in his latest sci-fi romance, Needle in a Timestack.

More Advice (from the MM Archive): Similarly, I often think of Gaspar Noé’s advice for our “Things I’ve Learned as a Moviemaker” department: “If the acting is bad in a scene, just cut it. The narrative will always survive the missing pieces.”

Why? Audiences are savvy and will keep up without endless explanations and scenes connecting the dots between point A and B.

Wicked News: Ariana Grande and Cynthia Erivo are set to star in the film adaptation of the wildly popular musical Wicked from In the Heights director Jon M. Chu, Variety reports.

AFM Trends: In MovieMaker‘s Fall Guide issue — which is on newsstands now — we launched a brand new department entitled “Distributors to Know.” In that feature, Saban Films president Bill Bromiley explains that his company is most interested in action-thrillers due to their universally-commercial prospects. They are also interested in star-driven vehicles. This Hollywood Reporter recap of the American Film Market, happening now, also notes a trend toward action titles and star-driven projects.

Ayoade in ’80s London: The hilarious Richard Ayoade plays a visionary director in Joanna Hogg’s The Souvenir and The Souvenir Part II, and she explains to MovieMaker that his expanded role in Part II is not a simple one-note portrayal of an arrogant director from the ’80s.

More Hogg + Swinton: Le Cinéma Club has a unique setup in which it hosts a new film for free every Friday. Full of interviews and film lists — like this one from John Carpenter — its journal section is also worth reading. Today Le Cinéma Club hosts the 1986 short film “Caprice” from Hogg, which, like The Souvenir, stars Tilda Swinton.

Weekend Read: Moviemaker Barry Sonnenfeld is a delight and if you haven’t picked up his memoir from last year, Call Your Mother: Memoirs of a Neurotic Filmmaker, we wholeheartedly recommend it. The Hollywood Reporter celebrates the 30th anniversary of The Addams Family with an extended look back on the hit film with Sonnenfeld.