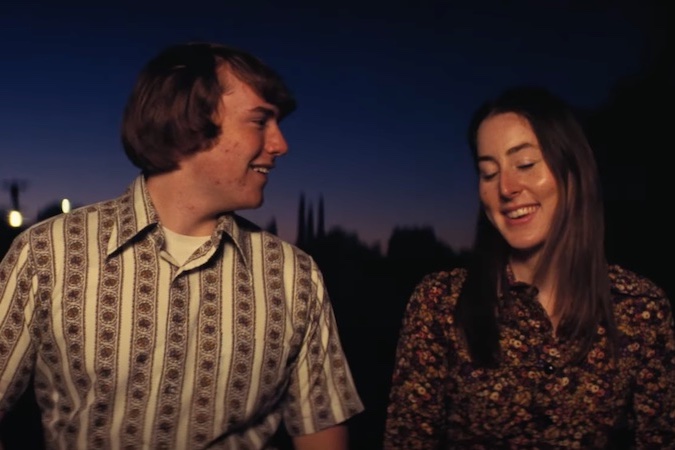 Licorice Pizza: Here’s the trailer for Paul Thomas Anderson’s latest film, which takes him back to the San Fernando Valley of the 1970s — also the setting for his breakthrough film Boogie Nights. In another Boogie Nights echo, the film stars Cooper Hoffman, son of frequent PTA collaborator Philip Seymour Hoffman. Alana Haim also stars. And yes, that’s Bradley Cooper as real-life producer Jon Peters, aka Barbra Streisand’s boyfriend in the 1970s and early ’80s. He produced Streisand’s 1976 A Star Is Born, and because of that received a producer credit on Bradley Cooper’s 2018 A Star Is Born.

Why Is It Called Licorice Pizza?: I can’t imagine, but man is that an evocative title for me, an ’80s kid who remembers eating lots of gross things. We used to love mixing fountain drinks to include every possible flavor and calling the resulting beverages “Suicides,” which would not be cool today. The boldest among us would drink these concoctions through black licorice straws.

Mammoth: The Mammoth Lakes Film Festival, known as one of the best tastemakers on the festival circuit, gave the jury award for Best North American Narrative Feature to Ultrasound, directed by Rob Schroeder and Written by Conor Stechschulte. The Best North American Documentary Feature went to Larry Flynt for President, directed by Nadia Szold. Here’s the complete list of winners, and what they won, from MovieMaker‘s Caleb Hammond, who was among the happy attendees.

The Almost-Anakin: The New York Times presents this compelling documentary short by Ben Proudfoot about Devon Michael, who almost won the role of Anakin Skywalker in The Phantom Menace. I love these NYT docs. The title is very good: “The Unchosen One.”

‘Grateful’: Dream Hampton, producer of the documentary Surviving R. Kelly, said this after the singer’s conviction yesterday on nine counts, including racketeering.

Grateful to the survivors. The ones who talked and the ones who didn't. #RKelly

As The Associated Press noted, Kelly continued recording and performing for years despite widespread questions about his relationships with minors — but that changed with the doc. “Widespread public condemnation didn’t come until a widely watched docuseries, Surviving R. Kelly, helped make his case a signifier of the #MeToo era, and gave voice to accusers who wondered if their stories were previously ignored because they were Black women.”

‘The Worst’: Attorney Gloria Allred, a lawyer for some of Kelly’s accusers, said outside the courthouse that of all the predators she’s gone after, including Harvey Weinstein and Jeffrey Epstein, “Mr. Kelly is the worst,” The AP reported.

Appeal: One of Kelly’s lawyers, Deveraux Cannick, said there were “inconsistencies” in the case against Kelly, and said he hoped to appeal.

Comment of the Day: “I feel like the way that most men determine their favorite Bond actor is the same way they determine what their favorite Weird Al album is: the one when you were about 13. There is some powerful brain-pleasure-reward stuff going on around that age, a lot of nonsense gets set in stone! So for me, Roger Moore and Weird Al in 3-D.” — Todd Schoenberger, answering the question, “Who’s your favorite Bond?”

Ultrasound:Here is a real creepy clip from the Mammoth Lakes winner.

Nuclear Family: How Ry Russo-Young Directed a Doc About Her Own Childhood Paternity Case
No Time to Die Hasn’t Even Hit Theaters and Twitter Is Already Having a Field Day With The Next Bond