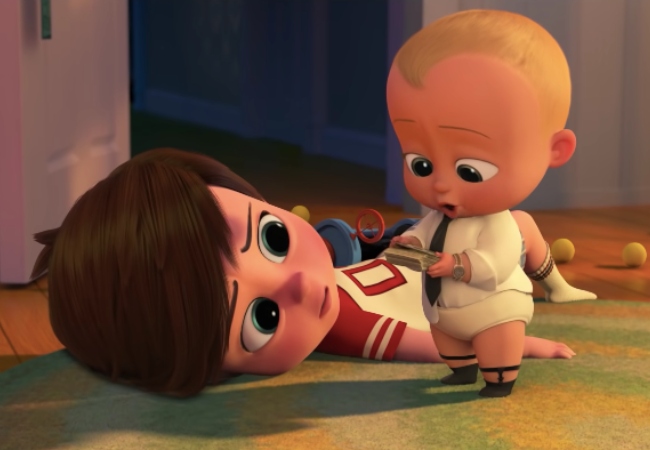 When it comes to visual effects, bigger and bolder doesn’t always mean better. Three visual effects artists who worked on DreamWorks’ The Boss Baby sequel, The Boss Baby: Family Business, shared their insights and advice for students interested in going into the animation field during a panel at Savannah College of Art and Design’s 2021 SCAD AnimationFest on Friday.

One of their biggest pieces of advice? Sometimes, simple is best.

“When I was a student at SCAD I always wanted to make my effects look big, look cool, as complex as possible. But when I’m working on the shot… the main thing is to help the storytelling and also try to direct where the audience, the eye, is going to look,” said Jinguang Huang, a VFX artist at DreamWorks Animation who graduated from SCAD in 2017 with an MA in visual effects.

“We always want to get them to focus on the character itself instead of the effects,” he added. “Sometimes we don’t need to make very hard, very complex effects setups. Sometimes, the simple thing is good… because we can easily change the effects and also hit the notes and then get a quick turnaround time.”

Also Read: Sci-Fi Gem Ultrasound Was in Pre-Production for One Month and Most of the Film Was Shot in Five Days

Jim Koonce, another DreamWorks VFX artist who worked with Huang on The Boss Baby: Family Business and graduated from SCAD in 2016 with a BFA visual effects, agreed that it doesn’t always make sense to add on unnecessary work just to make a shot look more complex.

“As effects artists, we tend to want to create these awesome systems and setups. And that’s something you do at school… you start to learn more about the software. You want to make it more robust so anybody could open the file and click one button and make it work,” he said. “Sometimes it’s just easier to just do some simple fix — just keyframe something on and off. You don’t need to make some setup that interpolates distance and uses matrix math to figure out some kind of rotation between two different scales. Sometimes it’s easier to just turn something on and off and get the shot done, I think. It’s good to be simplified where you can.”

Jason Mayer, who graduated from SCAD in 2003 with an MFA in Computer Art and is now head of effects at DreamWorks, says people who are learning animation and visual effects should focus on executing one simple effect rather than biting off more than they can chew.

“One of the things I would urge all of the people, especially students, that are listening here is your scope — your scale of what you’re trying to do. When I was a student, it was always, ‘I’ve got this epic that I want to tell of like, you know, this quest that this person goes on and it’s got to be a 17 minute short and I’m going to do it all myself,'” Mayer said. “The reality is when you get out here, you might have 10, 15 experts — like absolute experts — who spent their whole lives working on each individual one of these things, and that’s how these movies come together. Each person is putting that expertise in, and there’s no one person that is going to be an expert in all of these things. And so scaling that down and figuring out exactly what you want to do and being like, you know what, if I’m going to try to be an effects artist, for instance, I’m going to make sure that I can do a torch, like a perfect burning torch, moving it around, just simple.”

Mayer also gave some insight into what animators what to see when looking at a prospective new employee’s reel.

“As a reviewer of reels and stuff like that, I would prefer to see something that’s really slick and put together and is simple but executed at the level that we would expect, rather than this big, broad, ‘I’m going to blow up this building and then it’s going to set this fire and you start a tidal wave,'” he said. “It’s a trap you fall into.”