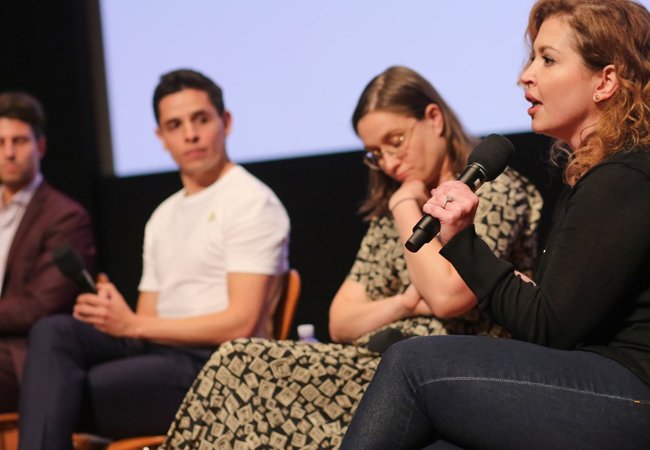 A man who was almost NASA’s first Black astronaut, a crew of Dungeons and Dragons fans, the six-year-old child of a militia leader, and a family struggling with alcoholism are among the subjects of the latest monthly NFMLA Film Festival, which celebrated the rich and varied storytelling of rising Canadian filmmakers.

On July 25th, the NFMLA Film Festival hosted InFocus: Canadian Cinema, co-presented by the Consulate General of Canada with additional support from Telefilm Canada, the Québec Government Office in Los Angeles and Mount Saint Mary’s University. The festival line-up showcased some of the most promising new Canadian filmmakers, in addition to celebrating other emerging voices from around the globe.

The festival kicked off with an InFocus: Canadian Cinema documentary program that was curated in partnership with Hot Docs. The day concluded with two narrative short film programs, one focused on Canadian filmmakers with the other featuring filmmakers from the USA and Iran.

NFMLA showcases films by filmmakers of all backgrounds throughout the year in addition to its special InFocus programming, which celebrates diversity, inclusion and different regions. All filmmakers are welcome and encouraged to submit their projects, which will be considered for all upcoming NFMLA Festivals, regardless of the InFocus programming.

Here are interviews with the filmmakers, and their social handles, where applicable.

About Valerie: Valerie Amponsah is a storyteller who works to uplift Black voices and to encourage open and unapologetic discussions about taboo subjects in the black community, such as mental health and trauma.

About Joseph, Margaret & I: Through vulnerability, healing and forgiveness, we see each member of a Ghanaian family process the effects of alcoholism in their own ways.

The 410 (Episode 1), directed by Renuka Jeyapalan and written by Supinder Wraich

About Renuka: Renuka Jeyapalan is a Toronto-based writer/director and graduate of the Canadian Film Centre’s Director’s Lab.

About Supinder: Supinder Wraich is an actor and filmmaker born near New Delhi raised in Toronto and currently living in Los Angeles.

About The 410 (Episode 1): Hard-boiled noir meets hipster chill in this tale of familial strife and vigilante justice.

Watch the NFMLA interview with The 410 director Renuka Jeyapalan and writer Supinder Wraich:

About Renuka: Renuka Jeyapalan is a Toronto-based writer/director and graduate of the Canadian Film Centre’s Director’s Lab.

About Life Support: A woman who wants to spend some time alone finds herself consoling a stranger.

About This-Ability: A visually impaired man runs errands with his guide dog as he reflects on his disability, his struggles, and his life as a blind person.

About Madeleine and Dusty: Madeleine and Dusty met at the 2015 TIFF Talent Lab and quickly joined forces as a filmmaking duo committed to producing content focused in exploring gender politics, the selfishness of human nature, and abuse of power.

About Chubby: A ten-year-old girl struggles with the residual trauma of her sexual abuse.

Watch the NFMLA interview with Madeleine Sims-Fewer and Dusty Mancinelli, directors of Chubby:

About Rebel: To Alex, a naive six-year-old boy, the mysterious patrols his father leads with his right-wing militia are just more occasions to go play hide and seek out in the woods.

Watch the NFMLA interview with Pier-Philippe Chevigny, director of Rebel:

About Ben: Ben Proudfoot has directed and produced over 50 noteworthy short documentaries, and was recently named in Forbes’ 2020 30 Under 30 list for his leadership and innovation in the brand-funded documentary space.

About The Lost Astronaut: In 1963, Ed Dwight Jr. was poised to be NASA’s first African-American astronaut. Until suddenly he wasn’t.

Watch the NFMLA interview with Ben Proudfoot, director of The Lost Astronaut:

Fantastic Beats and Where to Find Them, directed by Tyler Lucrecia and Spencer Simpson

About Tyler: Tyler Lucrecia is the shorter half of the BABESONCAMERA creative duo and is committed to writing, directing and staring in wonderfully absurd and often satirical digital content exploring the intersections of race, masculinity, and pop culture.

About Spencer: Spencer Simpson is the taller half of the BABESONCAMERA creative duo  and is committed to writing, directing and staring in wonderfully absurd and often satirical digital content exploring the intersections of race, masculinity, and pop culture.

About Fantastic Beats and Where to Find Them: Film student Ernesto finds an unlikely friend in the subject of his latest class project: a documentary on the enigmatic, up-and-coming rapper Yung Coochiesweat.

Watch the NFMLA interview with Tyler Lucrecia and Spencer Simpson, directors of Fantastic Beats and Where to Find Them:

About Zane: Although this is his directorial debut, Zane McWilliams is a filmmaker incredibly well-versed in writing for film, television, and literature.

About Wizards (Pilot): A group of D&D playing friends have their dynamic thrown out of whack when a new member tries to join their ranks.

About Portlynn: Portlynn Tagavi is a Los Angeles-based writer and director, currently working as a story artist for Netflix Animation.

About They Won’t Last: After attending their friends’ perfect wedding, commitment averse Christine is forced to consider the future of her own relationship when her hopeless romantic boyfriend Alex proposes.

About Aïcha: Aïcha Diop is an emerging director whose debut film, Nancy’s Workshop, launched online in September 2019 and has since amassed over 2.4 million views.

About Nancy’s Workshop: One Sunday a month, Nancy Falaise closes the doors of her hair salon to lead an empowering workshop for young Black girls struggling with their natural hair.

In My Room, directed by Colin Greenfield

About In My Room: A lone construction surveyor navigates the mysterious lower level of a soon-to-be demolished building and descends deeper into paranoia as his measurements begin contradicting his findings.

Watch the NFMLA interview with Colin Greenfield, director of In My Room:

About Brianne: Brianne Nord-Stewart is an acclaimed filmmaker who continues to refine her voice as a comedy creator and director who does not shy away from tough subjects.

About Bot Prox: An underground rage room gives a group of out-of-work technophobes a chance to take out their grievances on a sentient robot, only for their own inhumanity to turn against them.

John Waters and Killer Rabbits: A Night at the Drive-In, July 2020
The 25 Coolest Film Festivals in the World 2020, Presented by FilmFreeway