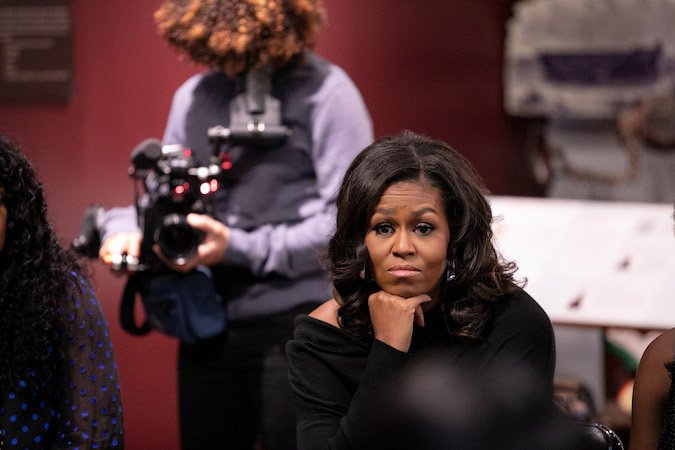 In today’s Movie News Roundup: Theaters are starting to reopen, but different states have very different rules; three inmates have died of a fast-spreading COVID-19 outbreak at Tiger King Joe Exotic’s prison; and Netflix announces a new Michelle Obama documentary that will fuel speculation about, well, you know.

Tiger King Prison Outbreak: It’s natural to roll your eyes at anything Tiger King related, but this story highlights a perilous situation in prisons nationwide. In the last 10 days there’s been a nearly thirtyfold increase in COVID-19 cases at the Texas prison that just happens to hold Joe Exotic. It has 233 cases, the most of any federal prison, and three inmates have died. Other prisons have had even more deaths. Many people will ignore this because 1. Tiger King connection and 2. They don’t care about prisoners. But no one’s been sentenced to die of COVID-19, and this deserves more attention.

Different Rules for Theaters: Several states are preparing to reopen, and they have several different approaches on movie theaters, according to this helpful USA Today story. In Texas, theaters can open, but must operate at only 25% capacity. In Georgia, theaters can reopen with specific social distancing and sanitation rules. Mississippi Gov. Tate Reeves says theaters are among the only businesses that can’t reopen, because they involve close, interpersonal contact. Oklahoma is reopening theaters Friday, and Variety profiled one theater owner there who has installed plexiglass screens and will require employees to wear masks and gloves.

Meanwhile, in the Czech Republic: The Kalovy Vary International Film Festival, which had been scheduled for July 3-11, is cancelled. It will still “offer a taste of the festival at selected movie theaters nationwide and the online KVIFF Eastern Promises Industry Days,” Deadline reports. The site says the fest plans to tour a few selected films, showing them to no more than 50 viewers at a time.

Michelle Obama Returns: Netflix announced that a new Michelle Obama documentary called Becoming will debut on May 6. It will follow her on a 34-city tour that took place before all… this happened [waves hand across barren landscape]. “Even in hard times, maybe especially in hard times, our stories help cement our values and strengthen our connections,” Michelle Obama said in a statement. “Sharing them shows us the way forward. I love and miss you all.” The doc comes amidst hopes that Joe Biden will choose her as his running mate even though she’s said many, many, many times that she has no interest in running for office, including in her memoir, which is also called Becoming.

Kevin Smith Finishes Mallrats Sequel… Draft: The filmmaker announced on Instagram that he has completed a “funny first draft” of a sequel to his 1995 comedy Mallrats, and posted an image of the title page as evidence. It’s called Twilight of the Mallrats and honestly it’s hard to tell how funny it is from the title page.

Hollywood Told Me No, So I Said Yes: Deon Taylor, the writer-director-producer whose successes include Meet the Blacks, has some good DIY advice to moviemakers tired of hearing the word “no.”

Comment of the Day: A reader named Connie commented yesterday on the news that Mickey Rourke went to Riga, Latvia to finish shooting a film during the COVID-19 pandemic: It’d be great to find out if no one got sick on that set in Latvia. If that’s the case, there’s hope for the industry. Maybe we can go back to work sooner if we take the precautions they did and more. Hopefully there’ll be a follow up article with a picture that doesn’t show a group of people gathered around a monitor. You can get direct video feed into iPads and iPhones with people sitting/standing six feet apart, you know…. I’d like to know how they handled catering, bathrooms, and shuttles, and of course, scenes requiring background performers.

Michelle Obama photo from Becoming, above, courtesy of Netflix.