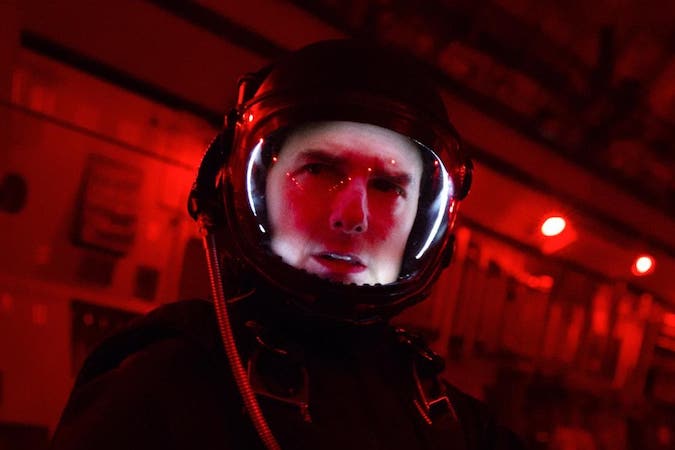 In today’s Movie News Roundup, lots of signs that Hollywood is plotting a big comeback: Tom Cruise is reportedly considering a film to be shot in outer space, Extraction 2 is happening, and Nicolas Cage has been cast as Joe Exotic. Meanwhile, a scrappy band of actors across the globe shot a new series about the quarantine, while under quarantine.

Tom Cruise in Space?: Deadline exclusively reports that Tom Cruise and Elon Musk are plotting with NASA on a possible action-adventure movie that would be shot in outer space. “This is real, albeit in the early stages of liftoff,” Deadline adds. Note how fast the most amazing entertainment news story in recent memory gets sidelined by a debate in the Deadline comments about whether Tom Cruise or Jackie Chan does cooler stunts, which perfectly summarizes why we as a planet can’t have nice things. (The image above is not a shot of Tom Cruise in space, but rather a shot from Mission: Impossible – Fallout where he does a HALO jump, which is something Jackie Chan has never done.)

Speaking of Ambition: A team of actors and filmmakers spread across the U.S., India and Rwanda have made a scripted web series called Disconnected about life under quarantine, shot during quarantine, following strict quarantine guidelines. How did they do it? This is how.

Tiger, Meet Cage: Variety exclusively reports that Nicholas Cage is set to star in an eight-episode scripted series about Tiger King Joe Exotic, which is based on this excellent Texas Monthly story that came out long before the Netflix docuseries. The Texas Monthly story includes lots of cool details Tiger King left out, including the fact that Joe Exotic used to be a cop.

Extraction 2: Joe Russo has signed a deal to write a sequel (or prequel) to the Chris Hemsworth film that looks likely to become Netflix’s most-watched original ever, Deadline reports. “We’re not committing yet to whether that story goes forward, or backward in time,” Russo told Deadline. How will they top the 12-minute continuous fight scene? We can’t wait to see.

P.S. Release This Movie, Please: This week we’re highlighting some great documentaries that you can’t see yet — because the film festivals where they would normally have gotten distribution deals were canceled or disrupted. Next on our list is P.S. Burn This Letter, Please, Michael Seligman and Jennifer Tiexiera’s dishy, devastating look at the drag culture of New York City in the 1950s, when drag queens broke down barriers at tremendous personal risk.

The Machetelorian: Robert Rodriguez confirmed that he’s directed a Season 2 episode of The Mandalorian. This on top of yesterday’s movie news that Taiki Waititi will direct an upcoming Star Wars film. “I am truly humbled to say I have now had the very rare privilege of directing the biggest star in the universe,” Rodriguez said on Facebook, posting a picture of himself with Baby Yoda.

We just want to point out that Rodriguez’s last Machete film ended with a promise of a Machete-in-space sequel that hasn’t happened yet. Maybe there could be a Mandalorian crossover? And get Tom Cruise involved, since he’ll be up there, too?