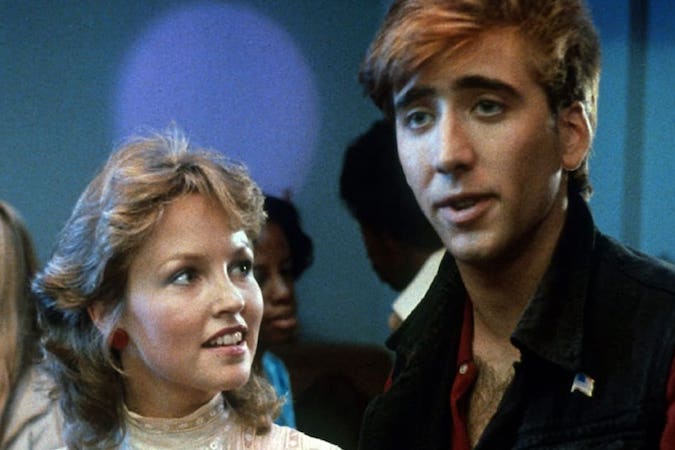 In today’s Movie News Roundup: Robert Pattinson, isolated in London, describes his Batman regimen of “barely doing anything”; how 1983’s Valley Girl worked around nudity demands and made Nicolas Cage a star; and the story of a man who sold his home to make a coronavirus rom-com. Also: A weird Tiger King update.

Robert Pattinson: If you feel bad that you aren’t working out hard during quarantine, don’t worry: Neither is Batman. In a series of amusing conversations with GQ, Bat-actor Robert Pattinson says he’s sticking to a strict diet plan that includes “sort of eat[ing] like a wild animal” but is barely working out with a single weight and a fitness ball. He adds that maybe actors don’t need to look like weightlifters: “No one was doing this in the ’70s. Even James Dean—he wasn’t exactly ripped,” he says. Pattinson spoke to GQ from a London apartment rented for Batman.

Cooped Up: A few years ago, Kane Guglielmi was a struggling filmmaker who sold his home to make a rom-com about a man with a “coronavirus,” something almost no one had heard of at the time. His film, Cooped Up, comes out Thursday, and it’s the timeliest movie in the world. In this piece for MovieMaker, Guglielmi charmingly tells the whole story.

Rad: The New York Times interviews Martha Coolidge, director of Valley Girl, about how she transformed what was supposed to be an exploitation movie into an ’80s classic now beloved by everyone from Kevin Smith to Quentin Tarantino. The first thing she had to do, the Times explains, was get around the producers’ demands for “four shots of nude breasts.” (She did it with quick shots “presented frankly and lacking any titillation,” the Times writes.) She also needed a compelling leading man, and did a pretty decent job by discovering Nicolas Cage, who got in character by sleeping in his car for most of the shoot. (Valley Girl is getting renewed attention because of a new remake. Gag me with a spoon.)

Socially Distanced Filming: The Hollywood Reporter did a cool piece on new technology that could allow actors to shoot scenes separately, then be composited together.”You could even simulate the shadows that one actor would cast on the other,” says Paul Debevec, a senior staff engineer at Google VR and Oscar-nominated VFX supervisor for Solo: A Star Wars Story. This could help avoid the spread of COVID-19 and increase the number of fights over the sizes of everyone’s shadows.

Hamilton Soon: Disney just announced that it will “fast-track the premiere of the filmed version of the original Broadway production of Hamilton” to make it available on Disney+ on July 3, just in time for Independence Day. Wait: Is this one of those marketing things where they create a false sense of excitement and urgency? This is a filmed version of the musical that was recorded way back in… June 2016. Still, we’ll probably watch.

Tiger Thing: You may have seen stories today saying things like, oh, I don’t know, “Tiger King Documentarians Turn Their Attention to Infamous Siegfried & Roy Attack.” Those stories may kind of overstate things. What actually happened is someone who works for one of the Tiger King producers called The Hollywood Reporter trying to get a phone number or email address for someone who once worked for Siegfried & Roy to get that person’s response to something Siegfried said on Good Morning America. Then The Hollywood Reporter wrote a story about it.

Wait: Do you not know about the Siegfried & Roy situation? Because this story has captured my imagination like almost no other. They were tiger magicians in Las Vegas whose partnership took a tragic turn in 2003 when one of their tigers, Mantecore, mauled Roy Horn onstage. Horn died over the weekend at the age of 75 of COVID-19. Does Ryan Murphy own the rights to this yet?

Here’s a pleasant look back to yesterday’s movie news.

Photo of Deborah Foreman and Nicolas Cage in Valley Girl courtesy of MGM.

Kane Guglielmi Sold His House to Make Cooped Up. Now It’s the Most Timely Film of the Year
Robert Pattinson Promises ‘Enormous’ Tenet Set Pieces ‘Like the Climax of a Normal Movie’