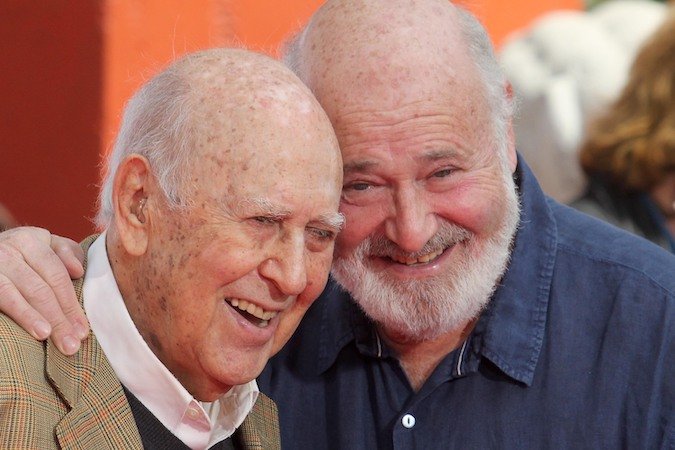 In today’s Movie News Rundown: We say goodbye to Carl Reiner, director of perhaps the funniest movie ever made; Anne Hathaway discusses Chris Nolan’s policy on chairs; and Anthony Mackie calls on Marvel to improve behind-the-camera diversity. Plus: Netflix makes a big effort toward trying to fix “a centuries-long financial gap between Black and White families.”

RIP Carl Reiner: The comedy legend, who didn’t let the “legend” part get in the way of the comedy, has died at 98 of natural causes. He directed movies including Oh God, All of Me and The Jerk, which is for my money probably the funniest film ever. He made a name for himself as a cast member of Sid Caesar’s Your Show of Shows, appeared with his friend Mel Brooks in a series of “2000 Year Old Man” sketches, and created The Dick Van Dyke Show. His partnership with The Jerk star Steve Martin included co-writing The Man With Two Brains and Dead Men Don’t Wear Plaid, as well as a memorable cameo in The Jerk as a man ruined by a pair of glasses. His children include fellow director Rob Reiner, with whom he is pictured above. “Last night my dad passed away,” Rob Reiner wrote on Twitter. “As I write this my heart is hurting. He was my guiding light.”

Netflix’s Pledge: In a blog post today, Netflix made a huge pledge to give two percent of its cash holdings going forward — initially up to $100 million — to “financial institutions and organizations that directly support Black communities in the U.S.” The company wrote: “Stories like Ava DuVernay’s 13TH and Explained’s Racial Wealth Gap show how systemic racism in America has sustained a centuries-long financial gap between Black and White families. As part of our commitment to racial equity, we are turning understanding into action.”

No Chairs: Variety‘s terrific Actors on Actors feature got plenty of attention yesterday. First, in a talk between Anne Hathaway and Hugh Jackman, Hathaway volunteered that her Dark Knight Rises and Interstellar director, Christopher Nolan — who also directed Jackman in The Prestige — “doesn’t allow chairs” on set. “His reasoning is, if you have chairs, people will sit, and if they’re sitting, they’re not working,” Hathaway says. She spoke admiringly of this, noting that Nolan’s films always arrive “under schedule and under budget,” but some people on Twitter nonetheless got mad at Nolan. Because if there’s one thing people on Twitter love, it’s sitting in chairs not working.

Calm Down, Calm Down: I’m one of them. Sheesh.

Marvel Behind-the-Scenes: On a more serious note, Anthony Mackie, who plays The Falcon in the Marvel movies (and was named the new Captain America at the end of Avengers: Endgame) said in an Actors on Actors conversation that he’s pushing Marvel to increase diversity behind the camera, not just in front of it. “I’ve done seven Marvel movies where every producer, every director, every stunt-person, every costume designer, every PA, every single person has been white,” said Mackie. “We’ve had one black producer — his name is Nate Moore.” Moore championed Black Panther, the biggest hit of 2018.