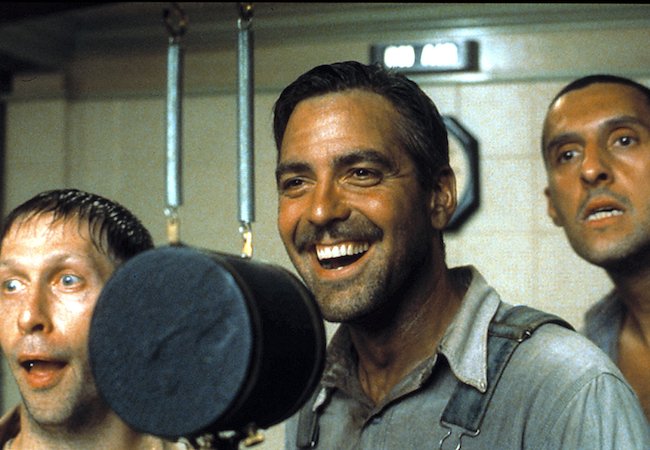 In today’s Movie News: Jay Penske now oversees all three of the biggest Hollywood trade publications; Godfather exec Peter Bart says Hollywood is ready for a ’60s-style reinvention; the O Brother cast gets the band back together; and the Trial of the Chicago 7 gets lots of early praise.

Trial of the Chicago 7: The dynamic new Aaron Sorkin film about the protests at the 1968 Democratic National Convention is getting well-deserved praise in the first public reactions. Netflix will release it in select theaters this week prior to its Oct. 16 streaming debut, IndieWire reports.

Peter Bart’s Prediction: The Paramount veteran who worked on films including The Godfather (and is now a Deadline editor-at-large) says on the new Bret Easton Ellis podcast that he thinks the movies are ready for a 1960s-style reinvention like the one that spawned the amazing run of 1970s films. Here’s a summary — lots of interesting comments. And the entire podcast is very much worth a listen — Ellis reads from his new novel.

O Brother Reunion: Oh Brother, Where Are Thou? Online, of course. The Nashville Film Festival will celebrate the film’s 20th anniversary of the Coens’ bluegrass musical with an online reunion including George Clooney, John Turturro, Tim Blake Nelson and Chris Thomas King. There’ll also be a little music. The festival is Oct. 1-7.

Montclair: The Montclair Film Festival, held in a lovely New Jersey suburb outside New York City, announced a lineup that includes festival favorites and awards season shoe-ins Nomandland, One Night in Miami, Minari and Ammonite, plus an in-person, socially distanced Q&A with In & Of Itself director Frank Oz, as well as magician-performance artist Derek DelGaudio, the focus of the film.

Citizen Penske: A just-announced deal means transportation heir and publishing magnate Jay Penske now oversees all three top Hollywood trades — Variety, The Hollywood Reporter, and Deadline. Believe it or not, just a decade ago these three publications were aggressive competitors. Penske has owned both Variety and Deadline since 2012, and also owns Rolling Stone and IndieWire, through his Penske Media Corporation. A joint venture with MRC, announced Wednesday, brings The Hollywood Reporter, Billboard and Vibe into the fold. The new venture will be called PMRC. PMRC also announced a deal to promote IP; MRC’s titles include Ozark, Knives Out, and several major awards shows.

But Don’t Worry: Journalists never, ever feel pressured to cover or not cover certain things because of their parent companies’ financial ties. No, but seriously: There’s often an innate, unshakeable chilling effect, no matter how well the boss maintains distance. I know lots of good reporters at all of the trades, and they aren’t pushovers, but this venture may make it harder for them to both be uncompromising and appear uncompromised. (“Conflict of interests? Uh, yeah. Like, galore,” opined Showbiz 411 columnist Roger Friedman.) The good news is that the PMC/PMRC/MRC entanglements are so numerous that employees may have a tough time remembering them all.

This Is Funny to Me: People over 40 may note that PMRC shares an abbreviation with the Parents Music Resource Center, the group founded by Tipper Gore and others and reviled by 1980s and 1990s musical artists for what they saw as its efforts at censorship. (Remember those dumb black-and-white parental warnings, back when you bought physical albums?) The group antagonized Prince, Madonna and Twisted Sister, among others, and notably once sparked a full-frontal nude demonstration by Rage Against the Machine. Twisted Sister singer Dee Snyder’s testimony before Congress is like the climax of a Sorkin movie. Anyway, PMRC is an amusing name for a venture that now oversees music publications.