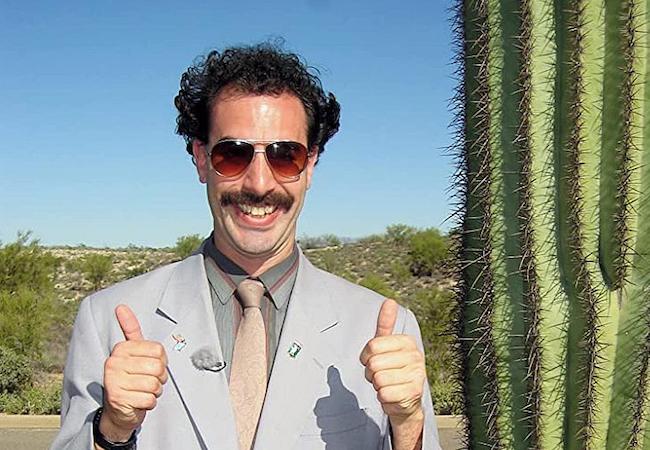 Movie Theaters Reduce Hours: Because of, well, you know.

Borat 2: The Borat sequel will be on Amazon Prime before Election Day, according to Deadline, which also says star Sacha Baron Cohen “had to wear a bulletproof vest on two different shooting days” and that “on many days, there were risky and dangerous scenarios in shooting.” That’s aside from the pandemic: The film is reportedly the first made during the COVID-19 shutdown.

It Begins: Borat already seems to be back in action, judging from this election-night tweet.

Congratulation to great friend of the Kazakh people @realDonaldTrump for winning debate today! Impressive and amazing result for a strong premier who always put America and Kazakhstan first! pic.twitter.com/qLljQ8b5UU

Lion King 2: Moonlight director Barry Jenkins will direct a follow-up to the new, photorealistic version of the Lion King, with much of the original cast returning, Deadline says. Sounds like the third season of The Knick may have to wait.

R.I.P. Helen Reddy: The singer best known for the 1970s feminist anthem “I Am Woman,” has died at 78, The Associated Press reports. She’s the subject of the just-released biopic I Am Woman from director Unjoo Moon, who spent almost a year with Reddy. “When we finally agreed that we would make it into a movie, I said, ‘Helen, I’m not making a documentary,” Moon told MovieMaker. “I’m not gonna get everything right, but I will always honor the spirit of who you are, what your life has been, and what your music means to people.’”

Zac Efron to Firestarter: He will not be playing the Drew Barrymore role in a Blumhouse update of the 1984 horror film about cruel government jerks who want to kidnap a little girl just because she has pyrokinetic powers. It was like ET, but with fire, and no alien. Yes of course it still has Gertie. The Hollywood Reporter has details on the Ephron version.

Tacoma New Dates: One of our 25 Coolest Film Festivals in the World, the Tacoma Film Festival, just announced the new dates for its latest edition, which will be virtual: It’s happening Nov. 6-15. The full program will be announced tomorrow, Oct. 1. Also? Tomorrow is Oct. 1.

That was the worst thing I’ve ever seen, and I wrote FANTASTIC FOUR.

That debate was the worst thing I've ever seen & I was in The Star Wars Holiday Special.

Comment of the Day: “A great Phoenix rises from the flames, recall. All those whammies were worth it,” writes Robin Lawson in response to producer Alok Mishra’s story about the absurd obstacles overcome by the Netflix horror hit 1BR.