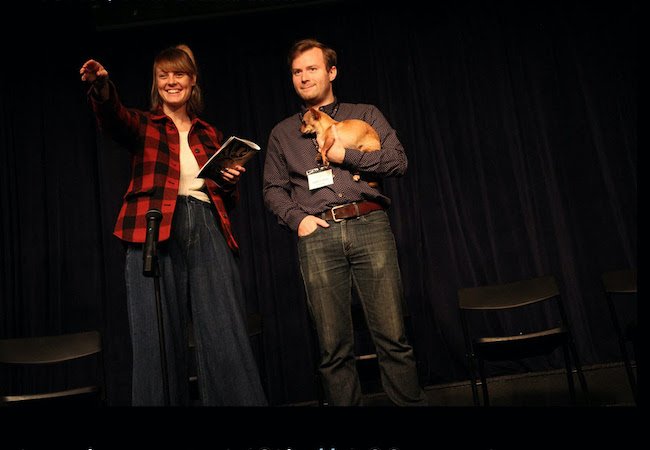 In today’s Movie News Rundown: Join a talk today on demystifying the process of selling a film; some Tenet rules that should be easy to follow; and Brad Pitt joins that Fast Times at Ridgemont High reading. Plus: Keanu Reeves on the scrappiness of movie people.

Best Film Schools in the U.S. and Canada, 2020: You saw our list yesterday, right? Congratulations to all these schools, working hard to help tomorrow’s moviemakers be ready for anything.

Brad Pitt Now, Too: Pitt has joined Jennifer Aniston, Sean Penn, Morgan Freeman, Matthew McConaughey and others for an all-star reading of Fast Times at Ridgemont High to raise money for COVID-19 relief, bringing the number of Oscar winners involved to six.

Film Distribution Demystified: Our friends at StudioFest do a wonderful video series called Demystified that I strongly endorse because it offers such transparent, hard truths at the process of making and selling a film. Today at 1 p.m. ET, StudioFest co-founders Charles Beale and Jess Jacklin on Tuesday will host a typically candid conversation about film distribution on YouTube and Facebook. Here:

Excellent Docs: The Nashville Film Festival just announced its selections in several categories for the 51st edition of the festival, which will take place Oct. 1-7. Three of the films — Finding Yingying, The Donut King and We Don’t Deserve Dogs — are on our list of documentaries that deserve distribution, which we’ll be updating soon. For more on what sounds like an excellent Nashville lineup, click here.

“Cool” as in “Not Cool”: Did anyone else misread the Variety headline “Consumers Cool to Bailout for Movie Theaters, Concert Venues, New Survey Reveals”? At first I thought consumers were cool with the idea, like “Bailing out theaters? Cool! I have tons of money lying around!” But in fact, they were more like, “My feelings for Felix have… cooled since that summer at the lake.” Anyway, a new survey reveals that consumers don’t want their tax dollars to bail out movie theaters or concert venues.

Tenet Requires Masks: IndieWire reports that theater owners who want to show Tenet will need to abide by all local laws and also soon-to-be-distributed National Associated of Theater Owners rules calling for masks to be worn at all times in the theater, except when eating or drinking. Good, but doesn’t it seem like it will be hard to enforce this policy in the dark while a movie is playing?

When Is Tenet Playing Near Me? Advance sales begin Friday for sneak previews beginning Monday, Aug. 31, and tickets are on sale Aug. 27 for showings that start Sept. 3, IndieWire writes, citing “contract details that Warner Bros. sent to exhibitors.” So we’ll know soon — when those tickets go on sale — where Tenet is actually playing. (I plan to go. Mask, sanitizer, won’t eat anything, front or back row if possible.)

Let’s Put on a Matrix: Keanu Reeves says the Matrix 4 crew have done an admirable job of following safety protocols now that production has resumed in Berlin. “If you’re ever going to get into any kind of situation that needs to be figured out or how do we do this, show business people are the best,” he told The Associated Press. “We’re scrappy. We know how to get stuff done. We’re inventive. We think on our feet, and that kind of spirit, kindred spirit of just coming together. It goes back to like, ‘Let’s put on a show.’ We got that feeling. ‘We’ll get some props. We got some things. We’re going to run it.’ And that spirit is definitely alive and well on The Matrix. Here’s video.

Let’s Put on a Show: Does the let’s put on a show trope (my favorite trope) start with Mickey Rooney and Judy Garland in 1939’s Babes in Arms? Note how crazy it is that all these kids talk like embittered 40-year-olds. Also, warning: No one here says the words “Let’s put on a show.”