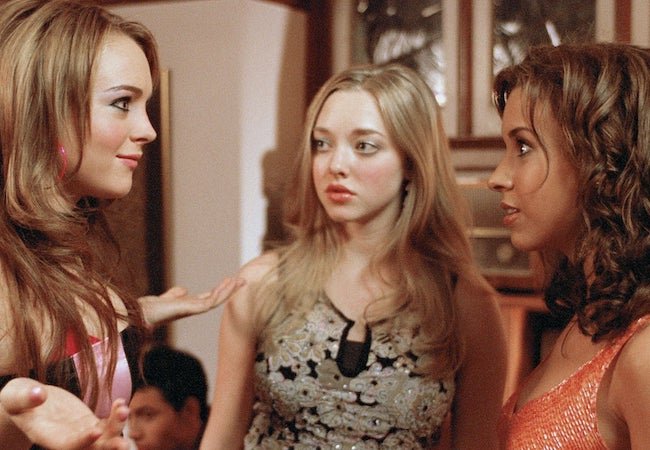 In todays’ Movie News Rundown: A wave of theater closings in the U.S. and UK, Mean Girls reminisce and want you to vote; 20 great Latino filmmakers talk about their films; and learn more about rising writer-director Nicole L. Thompson. Plus: A doctor’s rebellious CNN backdrop.

Meet Nicole L. Thompson: Our new feature The New School profiles striking new talents coming out of top film schools. Today we focus on Nicole L. Thompson, whose short film “Blackbird” is about a woman who cleans planes while dreaming of being a pilot. Thompson says her grandmother’s sacrifice has helped her to soar.

Mean Girls Reunite: Did anyone else get scary junior-high flashbacks from those words? Fortunately it’s about the movie. Katie Couric fetched Tina Fey, Lindsay Lohan, Rachel McAdams, Amanda Seyfried, Lacey Chabert and more to share their memories of the film and encourage voting. Are they up for a sequel? Tim Meadows says yes, if it’s the same cast but they all play different parts.

Something fun for this tumultuous time. Thanks to all of you, we reached our goal with @headcountorg to get over 5,000 voter activations! To celebrate that – Tina Fey and I got the whole gang back together for a Mean Girls Reunion! Happy #MeanGirlsDay 😃 PS: It’s exactly 1 month from election day so please please make sure you are registered and have a plan to #vote on November 3rd – it’s so important! We can still keep the momentum going – head over to the link in my bio to learn more. @lindsaylohan @mingey @thereallacey @anagasteyer @whatsupdanny @jonathandbennett @rajivsurendra @headcountorg @meangirls @meangirlsbway

R.I.P. Thomas Jefferson Byrd: The 70-year-old actor, who appeared in many Spike Lee films including Clockers, He Got Game, Red Hook Summer,  Chi-Raq, Get On the Bus and Girl 6, was fatally shot in Atlanta over the weekend, The Associated Press reported. Byrd was nominated in 2003 for a Tony for his performance in the Broadway revival of Ma Rainey’s Black Bottom. “Tom Is My Guy,” Lee wrote. “May We All Wish Condolences And Blessings To His Family. Rest In Peace Brother Byrd.”

Anyone Watch CNN This Weekend? Yeah, I didn’t watch it for 48 hours either. One moment of levity came from the backdrop behind Dr. James Phillips of Walter Reed Medical Center, who seems to believe in a healing force from a long time ago, in a galaxy far, far away…

Comment of the Day: “Motherless Brooklyn,” writes Film Guy in response to this piece about Aaron Sorkin discussing how there’s never been a Robert Moses movie. It’s true that there are some hints that Alec Baldwin’s Motherless Brooklyn villain is based on the influential New York City builder. For example: He’s named Moses Randolph.

Movie News: Let’s Talk About the Only Thing Anyone Is Talking About
Movie News: SXSW Fallout; 1988 v. 2020; Vanilla Ice Reconsidered