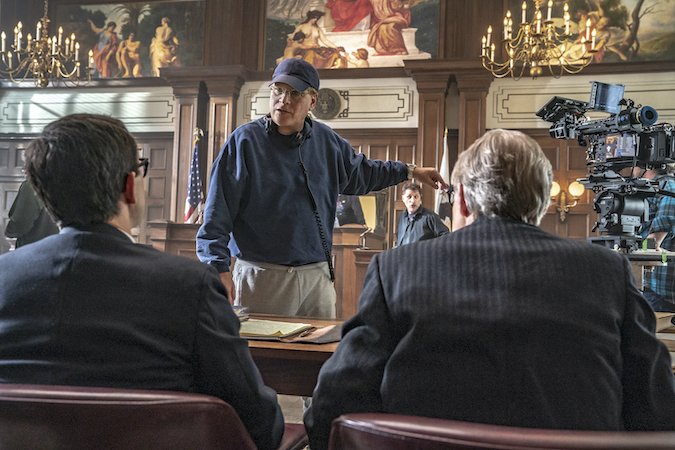 Aaron Sorkin, who has written about such modern influencers on our society as Steve Jobs and Mark Zuckerberg, is surprised there’s never been a movie about Robert Moses, the public official who built much of modern New York.

Talking with MovieMaker about his latest feature, The Trial of the Chicago 7, Sorkin agreed that there are similarities between Jobs and infamous city planner Robert Moses, noting that both are visionaries who arrogantly bullied their way to power.

“I’m surprised there’s never been a Robert Moses movie,” Sorkin said. “He built a lot of New York City. It’s a question of whether he built the suburbs, but he facilitated the suburbs. It’s the Long Island Expressway and other parkways.”

Would modern Hollywood make a movie about a man who, as detailed in Robert Caro’s famous biography The Power Broker, harbored racist beliefs and frequently denied communities of color the lavish parks and other luxuries that he built in largely white areas?

“When it comes to monuments or names of military bases or anything like that, I’m not someone who thinks: ‘No, don’t get rid of the Confederate generals, we can’t erase our past.’ I’m the opposite of that. Monuments are for honoring people. We don’t learn our history from statues, we learn history in school, we learn history from books. We don’t have a statue to Osama bin Laden, but we’re not going to have a hard time explaining 9/11 to our kids. That will be taught,” Sorkin said.

“However, we shouldn’t stop telling stories about people who are racist. It’s important to remind ourselves that there is such a thing. I don’t want them to become like ghosts, where you believe in it or not. I do want us to be reminded that this is real, so that when people talk today about the pain of racism, they’re not written off, as so many people do: ‘We’re post-racial where nobody’s really racist.’ No, show these people.”

Steve Jobs, written by Sorkin and directed by Danny Boyle, was released in 2015. The Social Network, the Zuckerberg origin story that Sorkin wrote and David Fincher directed, was released 10 years ago today.

A master at manipulating good press out of New York City newspapers (particularly The New York Times), Moses maintained an almost spotless public image in his long career as New York City Parks Commissioner and Chairman of the Long Island State Park Commission (among other titles). But that ended in 1974 with Caro’s Pulitzer Prize-winning book, the full title of which is The Power Broker: Robert Moses and the Fall of New York.

Also read: Aaron Sorkin Had One Rule For The Trial of the Chicago 7

In the extensively researched book, Caro mapped out how Moses’ idealism for improving the lives of city residents eventually gave way to a blind thirst for control. President Franklin D. Roosevelt and Moses were lifelong enemies and a memorable section of the book details their feud. The world seems like a perfect fit for someone like Sorkin to explore, but when I mentioned he could write it, he only laughed.

In May, The New York Times noted that Caro’s The Power Broker was conspicuously popping up in the backgrounds of many TV pundits’ video calls.

The Trial of the Chicago 7, written and directed by Aaron Sorkin, is now in theaters and will be available to stream on Netflix on October 16.

With The Legend of 5 Mile Cave and The Warrant, INSP Films Favors Westerns That Uphold Classic Western Values
To Make Our Movie TAR, We Moved as Slow as, Well…