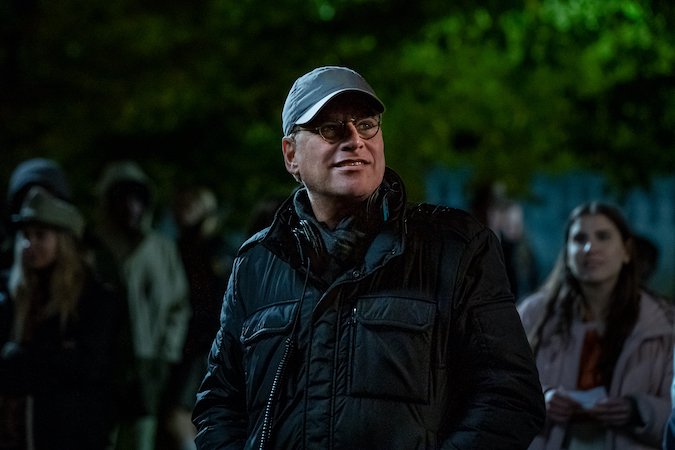 On a Saturday morning in 2006, Aaron Sorkin met with Steven Spielberg and said he’d be delighted to write a script about the Chicago riots of 1968. On the drive home, though, he realized there was a problem: He didn’t know anything about them. So he called his dad.

“What happened in Chicago in 1968?” he remembers asking. “What was this conspiracy trial that followed? I didn’t know any of it.”

But he’s always willing to learn. The Trial of the Chicago 7 marks his return to courtroom drama, the genre that sparked his film career. He was an actor first, then a playwright, whose A Few Good Men became a hit film in 1992 and established Sorkin’s gift for writing dialogue tailor-made for movie stars to deliver: In The Trial of the Chicago 7, Sacha Baron Cohen gets to deliver the film’s equivalent of Jack Nicholson’s unforgettable, “You can’t handle the truth.”

But The Trial of the Chicago 7 is also a test for Sorkin. Though he created the Emmy magnet The West Wing, and his screenplays include The American President, Moneyball, and The Social Network, which won him his 2011 Oscar, the new film is only his second as a director.

Sorkin turned in his first draft of the Chicago 7 script the day before the 2007 WGA strike, beginning a long process of the “can getting kicked down the road,” Sorkin explains. Spielberg eventually transitioned from director to producer, and both Paul Greengrass and Ben Stiller were attached to direct at different times.

“The president of the United States was getting nostalgic at his rallies about the good old days, when you used to beat the crap out of protesters and you’d carry them out on a stretcher. So it felt like this story was suddenly relevant,” Sorkin tells MovieMaker. “And I had directed my first movie, Molly’s Game, which Steven was sufficiently pleased with, that he thought I should direct Chicago 7.” 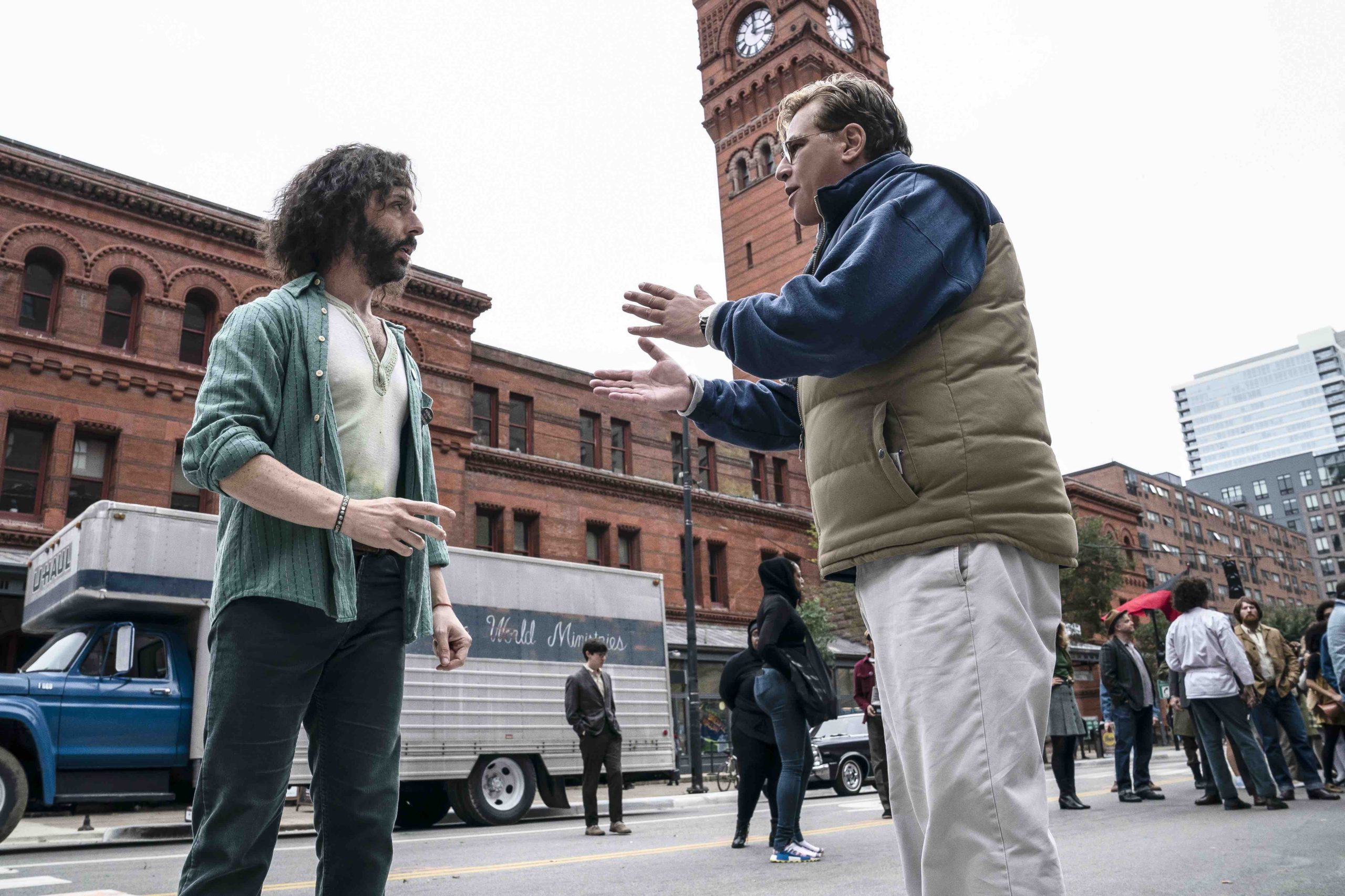 Jeremy Strong and Aaron Sorkin on the set of The Trial of the Chicago 7. Photos by Niko Tavernise

The film argues that federal prosecutors opportunistically grouped together several left-wing activists who were not, in fact, closely aligned, in order to demonize them and blame them for violence that was actually the fault of the police. One was Tom Hayden, who Sorkin was able to meet before he died in 2016.

“Spending time with Hayden is what led me into the personal story between Tom and Abbie,” Sorkin says. “Suddenly the film was organized into three pieces. I was going to tell three stories at once, which was the courtroom drama, the evolution of the riot — how did what was supposed to be a peaceful protest turned into such a violent clash with law enforcement? And the third story was the personal story, the friction between Abbie and Tom, these two guys who are on the same side, but can’t stand each other, and by the end come to respect each other.”

The Trial of the Chicago 7 opens with an energetic montage which introduces the Hoffman/Hayden divide up top, showcasing the different factions of the anti-war left. The montage ends with the usually unflappable Walter Cronkite’s proclamation: “A Democratic Convention is about to begin in a police state. There just doesn’t seem to be any other way to say it.”

Jumping ahead five months past the convention (“Obviously we’re going to go back there and see what happens,” Sorkin explains), the audience is thrust behind enemy lines into the offices of newly installed Attorney General John Newton Mitchell. Through a well-timed presidential portrait swap, we learn: Johnson out; Nixon in. The scene sets up the entire trial.

“It had everything to do with decapitating the left, the anti-war movement, and Black leaders. To the Nixon administration, guys like Abbie, Jerry, Dellinger, Rennie, Hayden, Bobby Seale, were very dangerous guys,” Sorkin says.

The scene also introduces Joseph Gordon-Levitt as Richard Schultz, a young hot- shot prosecutor who is ambivalent about the government’s us vs. them approach.

“Schultz says in that scene, ‘I represent the people without passion or prejudice.’ His job is to win, and he understands that, but he knows that they’re making a PR mistake on this that is going to make them look good and us look bad. But more importantly, he is concerned about the First Amendment implications. In other words, he doesn’t think these men are guilty.” 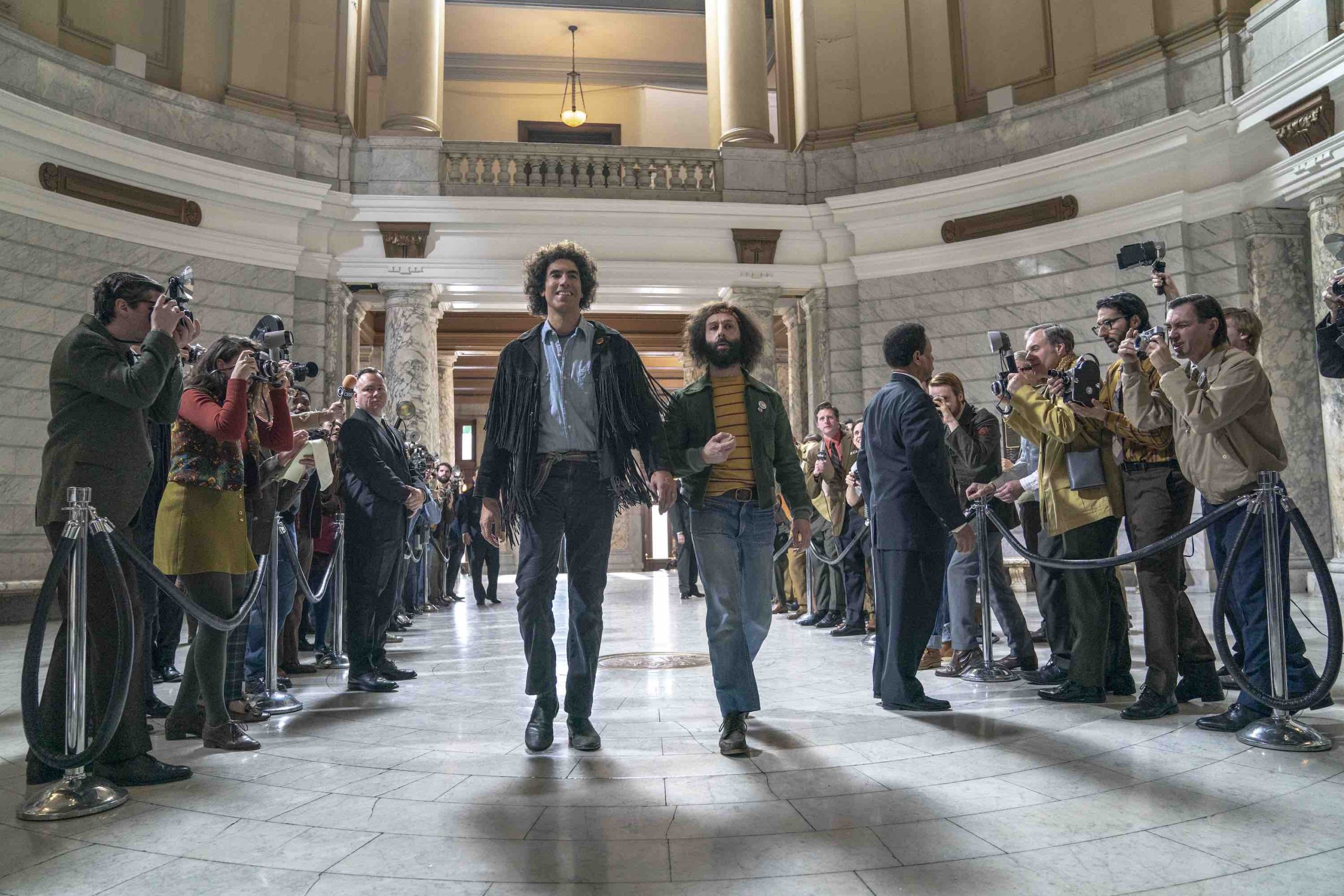 The “Yippies” arrive for their day in court.

How did Sorkin manage such a large ensemble cast? He didn’t see it as a problem.

“I felt like I was thrown the keys to a Formula One race car every morning, and if I just didn’t put the car in the wall, these guys were going to win the race. What I mean by that is, I just needed to make sure that everybody was in the same movie. And that seemed to happen pretty easily. … These are phenomenal actors, you really didn’t have to coax a performance out of them. Everybody can have their own way of getting there.”

He describes some of their stylistic differences: “Jeremy Strong is an immersive actor. If he’s playing a scene where there’s a knife sticking out of his chest, he wants someone to jam a knife in his chest. Until the moment I called action, Sacha would have his earbuds in, listening to Abbie Hoffman speeches, because he always wanted to stay with the dialect. He wanted to stay in that zone.” Frank Langella plays Judge Julius Hoffman, an occasionally menacing presence who alternates between senility and thinly veiled disdain for the defense. “Frank Langella is a sweet, affable guy who tells wonderful stories. But he told me that he didn’t want to socialize with the rest of the cast. He wasn’t going to be hanging out at craft service with them, and that when the cast was called to the set for those courtroom scenes, he wasn’t going to go in with them. He was going to go in the back door, because he wanted these guys to only see him in court at that bench. So people have their own styles, but they all ended up in the same movie.”

Cohen was attached to the project the longest. Sorkin relays that while at Cambridge, Cohen wrote extensively on “the intersection of Jews and African-Americans in the civil rights movement in the ’60s.” His research continued during shooting.

“At night I’d get an email from him at the hotel with just a piece of a speech of Abbie’s, saying, ‘Oh, this is so good. Can we use it somehow?’ And I’d have to say to him, ‘It is really good, but it has nothing to do with the scene,’” Sorkin says.

On a phone call from quarantine in his native Greece, The Trial of the Chicago 7 cinematographer Phedon Papamichael confirms Sorkin’s steadfast commitment to the rhythms of his dialogue: “To him, it’s all about the spoken word, and he really doesn’t get involved in designing shots or coverage, as long as the person who speaks his line is on camera. To the extreme that sometimes he’s sitting in front of the monitor, and he has his eyes closed. He just really focuses on the rhythm of the language and the rhythm of the writing.” 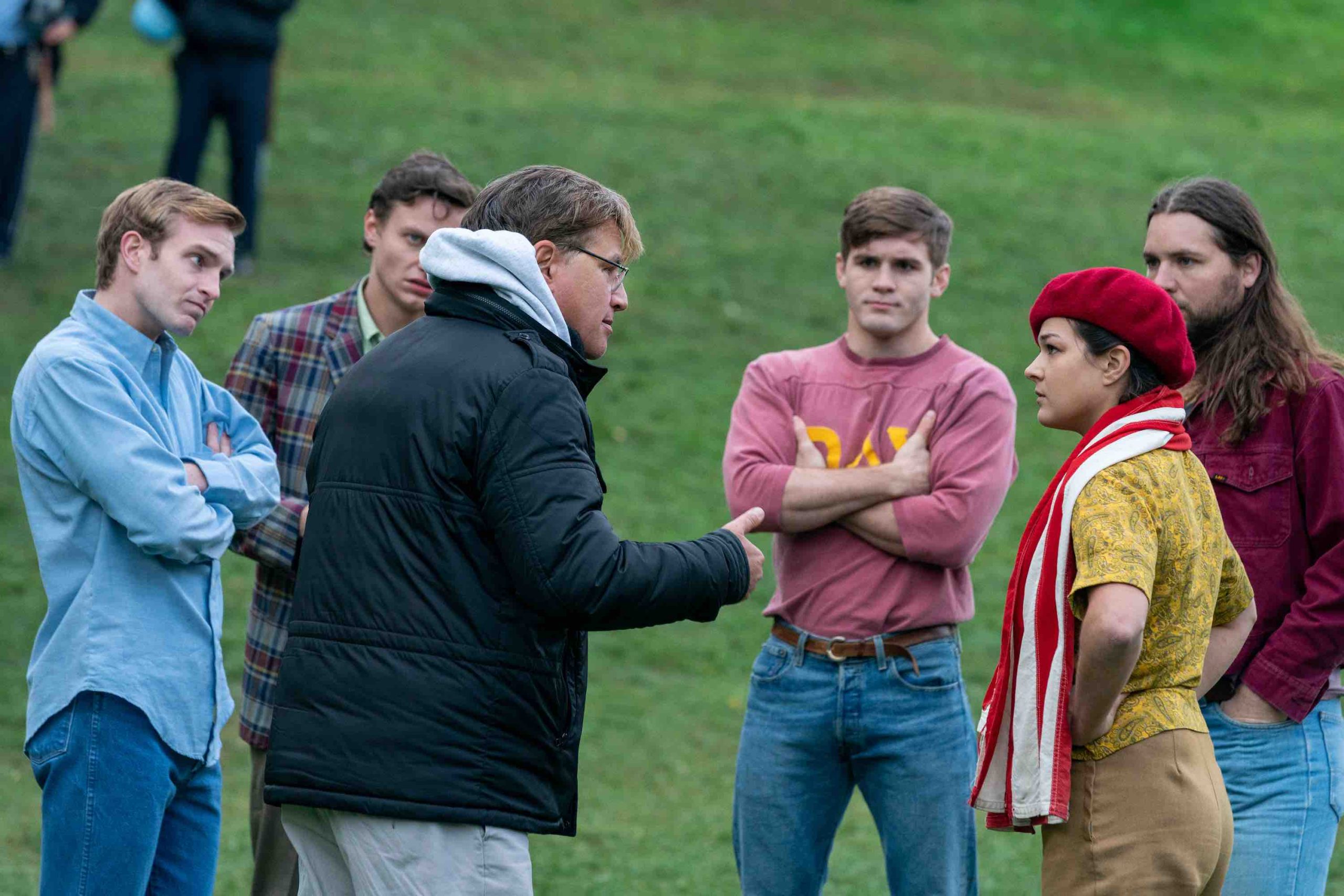 Papamichael said Sorkin even once told him, “I know nothing about what you do.”

Sorkin adds that “with Molly’s Game and this, I tend to lean on the DP probably more than your average director. I’m so weak when it comes to the visual elements of filmmaking.” One of his takeaways from directing Chicago 7 was this:

Another takeaway: Shoot lots of light through smoke.

“I don’t even want to say that I stole it from Steven, which of course I did, because I don’t do it nearly as well as Steven, but I first started learning about light through smoke with E.T., and then in every one of Steven’s movies after that, and got to use it for the first time here. Now every movie I write is going to have light coming through smoke in every scene. It’s the only thing I know how to do as a director.”

Joking aside, Sorkin did have one mandate that he applied across all departments: The film needed a modern feel. “It was always my intention that the movie not be about 1968, that it be about today. And
all of our department heads, from Shane Valentino, our production designer, to Susan Lyall, our costume designer, to Phedon — everybody, I made it clear: ‘Don’t lean into ’60s iconography. Don’t lean into the peace sign, the tie dye and the psychedelic aesthetic.’” Sorkin asked his composer, Daniel Pemberton, who also scored Molly’s Game, to “stay away from the ’60s protests songbook.”

Sorkin explains: “People are coming into this movie, just kind of assuming that they’re going to hear ‘Fortunate Son’ and ‘Sympathy for the Devil’ and that kind of thing.”

He does concede that “Fortunate Son” is a Vietnam soundtrack staple for a reason. “It works every time: chopper with the helicopter blades, and then…” He playfully mouths the iconic opening guitar riff from the Creedence Clearwater Revival classic.